Starting next month, English learners, homeless students and students who rarely log on for online classes will be among those who can choose to return for some in-person instruction at Baltimore City Schools.

Otherwise, most public students will continue to be instructed online.

News of a partial reopening did not come from last night’s Board of School Commissioners meeting, but from an embargoed press release given to the Baltimore Sun.

“We had a hiccup with the use of our embargo,” communications director André Riley said today after the Sun published the reopening information. “I do want to be clear: we are sorry it happened that way.”

An editor said City Schools gave the Sun details of the plan Tuesday, setting an 8 a.m. Wednesday embargo which the news organization honored.

“The school district provided the reopening plan to the Sun Tuesday evening, with the agreement that the contents were embargoed until [a planned] on-the-record discussion began at 8 am Wednesday,” according to education editor John O’Connor.

Baltimore Teachers Union (BTU) spokesman Corey Gaber was among many parents and teachers who expressed frustration with Schools CEO Sonja Santelises, who did not provide any details about a possible reopening at last night’s meeting.

The BTU and the Parent and Community Advisory Board (PCAB) have advocated for an all-virtual first semester, arguing schools should reopen only when they have the resources to do so safely, despite the inadequacies of online learning.

Gaber said BTU President Diamonté Brown had a call scheduled with the administration about the reopening this morning, but “it was published before they even ended up speaking to her.”

In a statement this afternoon, the BTU denounced the school’s reopening plan as incomplete, vague and at times contradictory, saying it was “indicative of a lack of transparency, respect and care for student and employee safety.”

The union took special issue with the proposal to encourage homeless and special education students to come to in-person classes. “Putting the most marginalized students and their often inter-generational families at risk to contract a deadly virus isn’t equity.”

“The School Board and district have not addressed a myriad of questions about health accommodations, safety and the effectiveness of an unstable and under-resourced in-person learning environment,” the BTU added. 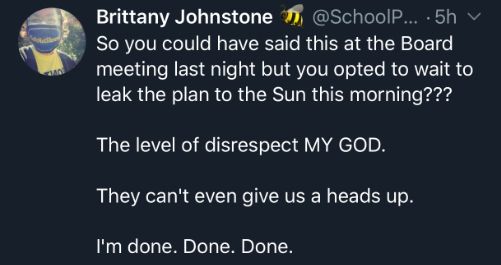 Most Schools to Stay Closed

Starting in the second quarter next month, pre-kindergarten, kindergarten, English learners, special education students, and students who haven’t attended more than 20% of online lessons can return for some in-person instruction.

Sixth and ninth graders who are transitioning to new schools also will be asked to return as well as homeless students and students in career technology studies.

The administration plans to reopen 25 of the 170 schools in the system, with the goal of providing all students the option of a hybrid model in the spring semester.

Schools spokesman Riley said only students enrolled in those schools could return, and the list of schools is not yet final. He did not confirm how much time students would spend in school buildings.

Families will be given a choice of whether they want their children to return to school or have them continue to learn online.

A preliminary survey indicates that about half of families do not want to send their children back to school, and another quarters will consider a return only under certain conditions.

Not all teachers will have the choice to stay home.

“We are looking for volunteers,” Riley said. “However, there are some groups of employees, based on who they serve, that will have to come back.”

Santelises said last night that she was confident schools could reopen safely “despite some of the highly inaccurate and, frankly, self-serving claims that I have seen on Facebook.”

“We know not all of our students are thriving in this virtual environment.”

She said she felt comfortable sending her own kids back to the classroom, but didn’t want to force other families back.

“I have a daughter that needs to be back,” she said. “That’s something that our family is making together, and I don’t want to take that away from anyone else’s family. Me wanting to send my child back should not supersede someone else’s ability to make the best choices for their family as well.”

She said the administration is instituting safety measures that will be in place before students return to classes.

They include better air filtering in some schools, personal protective equipment for staff and teachers, distancing measures, and plenty of cleaning supplies and soap on hand.

• To reach this reporter: ianpground@gmail.com