Right now, the Mount Vernon Place United Methodist Church is shrouded in uncertainty and doubt, but not of the spiritual kind. It has more to do with Man and Mammon.

The church has one of the most visible locations in Baltimore. It’s steeped in history. It’s surrounded by anchor institutions such as the Peabody Institute and the Walters Art Museum. It’s always had support from city leaders.

So how has such a prominent church found itself in a situation where it’s about to be sold to an out-of-town developer who doesn’t have a specific plan for what to do with it, except to sell off the adjoining church office house as quickly as possible?

What led its owner to think that selling the building to a person with no track record in Baltimore is the right way to safeguard not only the church but the future of Mount Vernon Place?
___________________________
The Baltimore Planning Commission will meet TODAY at 1:30 p.m. to decide whether the church property can be subdivided – a move favored by the developer and opposed by many preservationists. The virtual meeting can be accessed HERE.
___________________________
To insiders like me – I was on the board of trustees for over 40 years, serving as treasurer and president – the situation is appalling, but not a surprise.

I blame bad decision-making by the owner, the Baltimore-Washington Conference of the United Methodist Church.

The D.C.-based group appointed a series of weak or ill-suited pastors – or, alternately, wonderful pastors who received no support. As a result, the last two decades have been very unsettling.

I’ve watched the congregation gradually shrink in size and wealth. Dozens and dozens of families left, particularly ones with children, and deferred maintenance caused more damage to the wonderful stone structure. 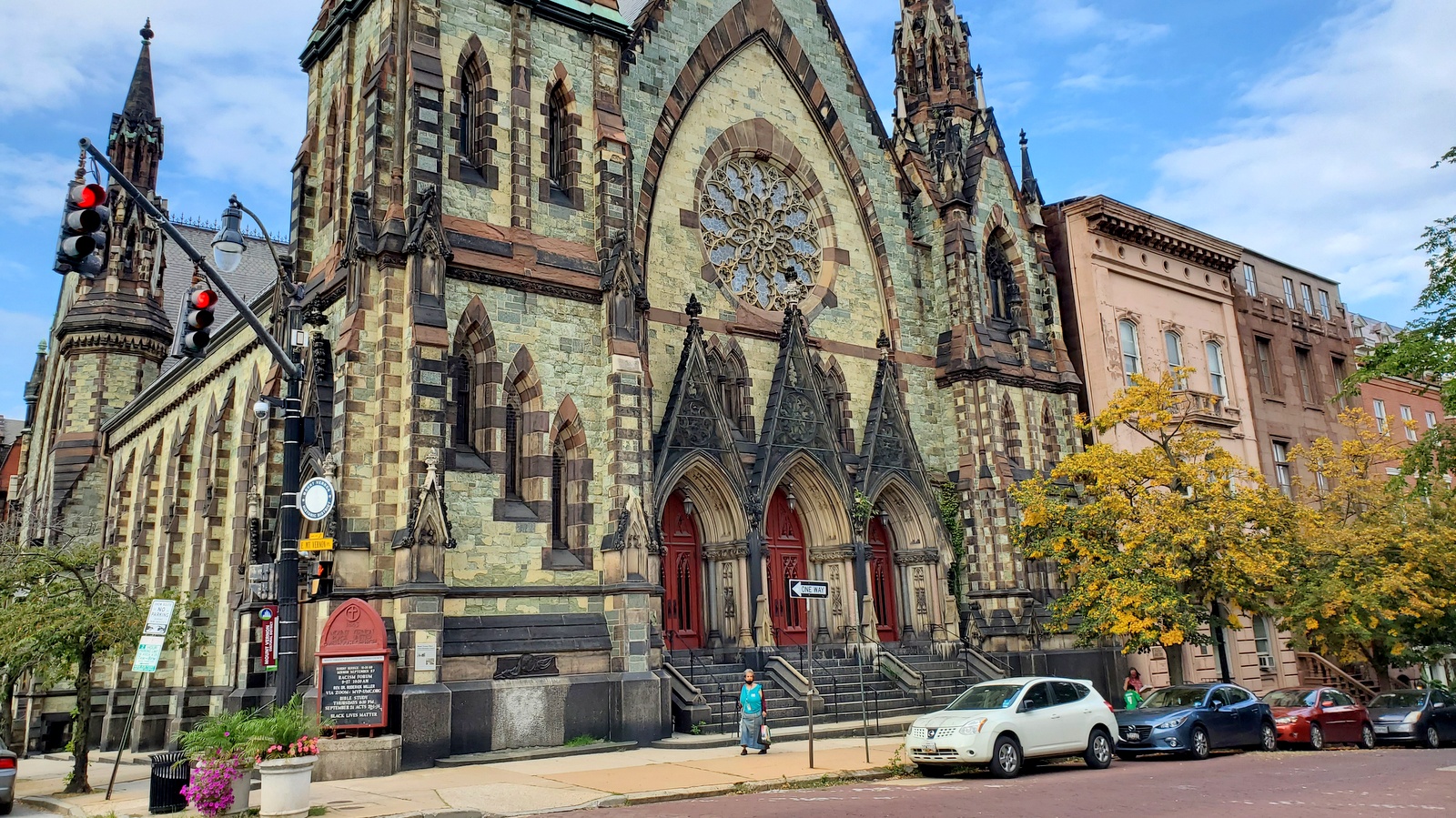 As The Brew recently disclosed, the conference is planning to sell this architectural jewel for roughly $1 million – a bargain-basement price, considering some rowhouses in the area are selling for nearly that.

The impending sale to real estate syndicator Joseph Novoseller of Lakewood, N.J., is a sad but entirely predictable denouement.

As with many downtown congregations, membership at the church has been declining. But I believe the last four appointments were mistakes that left us especially vulnerable.

Pastor No. 1 was a retired man from Indiana working in Washington in a national Methodist office.

Sent to us as an “interim,” he chose to not live in our Asbury House parsonage, but instead stayed in D.C. in his apartment. He only came to church on Sundays to preach and for the occasional evening meeting. We never saw him otherwise – he was an absentee pastor for four years!

No. 2 came straight from seminary. He was great in the pulpit and as a biblical scholar, but he had no training and was not prepared to lead a congregation. He should have gone back to seminary as an instructor. He now is a missionary.

No. 3 was everything we wanted. He had several years at Grace Church on North Charles Street and specialized in working with young people. But during the ordination process, the powers-that-be failed him (politics, I heard). It upset him so badly, he left the ministry.

No. 4 was our first African American and first female. After four years she also left, I think to pursue missionary work. 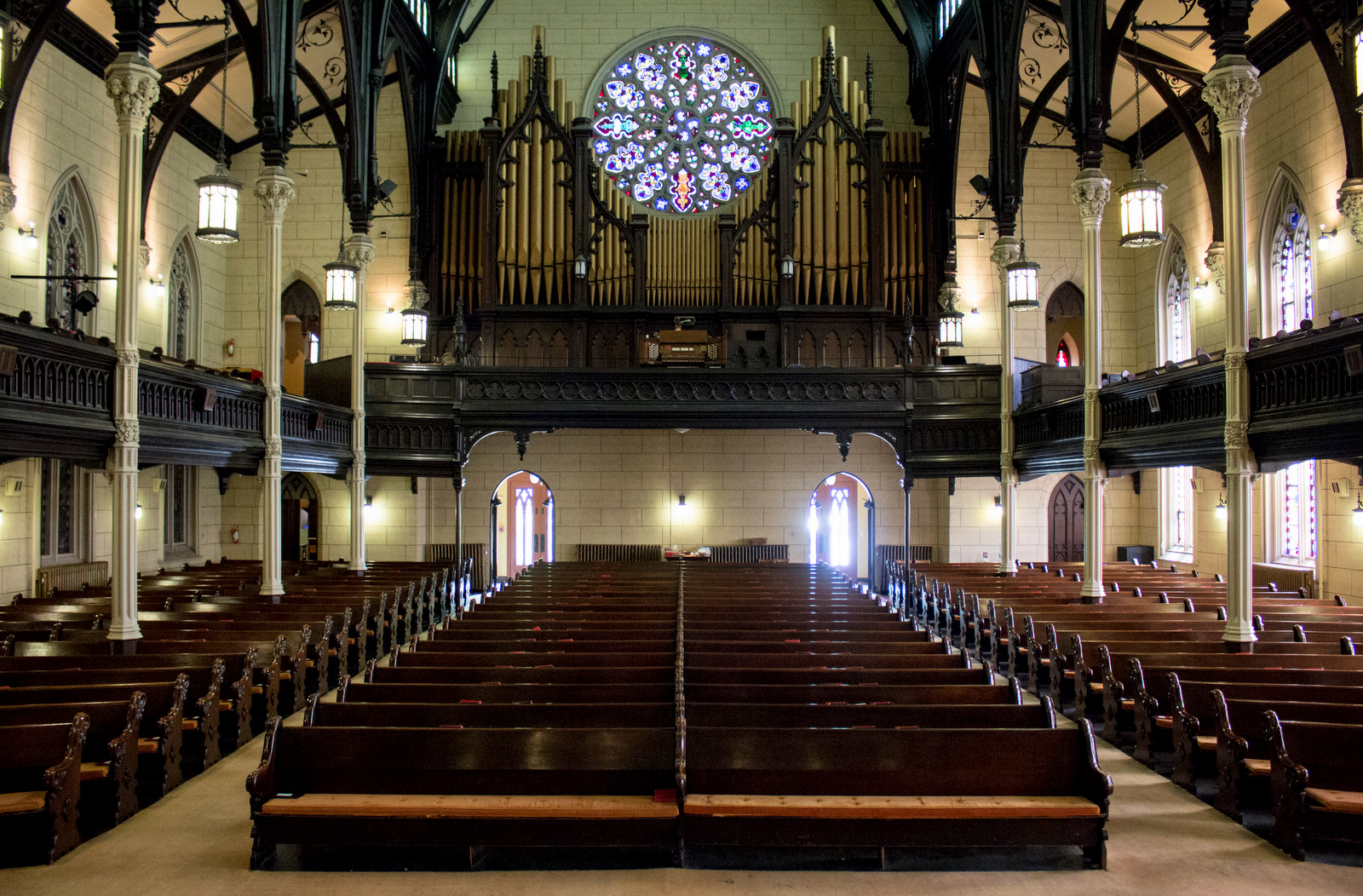 Church services are no longer held in the main sanctuary due to water leaks. (praisebuildings.com)

Now to the church itself. With declining membership, obviously our income declined. Most of our older donors were gone. To cut to the chase: we found ourselves without sufficient income to pay our bills.

We went to the conference and, after many conversations, agreed to turn Asbury House and the church building over to them. The conference would pick up the property expenses. In return, the congregation got a seven-year lease to use various areas.

Can’t someone from city government – or from Baltimore’s many distinguished institutions – figure out a way to save this beautiful building?

We have been worshiping in the Mount Vernon Room (formerly the Blue & Gray Room). We are down to 20-25 worshipers on any given Sunday.

The good news is we have a terrific retired pastor named Dr. Roderick Miller assigned to us. And we do have enough income to cover our responsibilities (pastor’s salary, cleaning and a few other costs).

But what is to become of us if the developer succeeds in separating the two buildings and turns the adjoining Asbury House into upscale apartments? There is vague talk of how it might become some kind of “community center.”

That subdivision is what the developer is seeking to accomplish when his attorneys go before the Baltimore Planning Commission this afternoon with a zoning request.

The congregation is guaranteed space for worship under the contract of sale. But nothing has been settled yet, with the coronavirus situation slowing everything down. 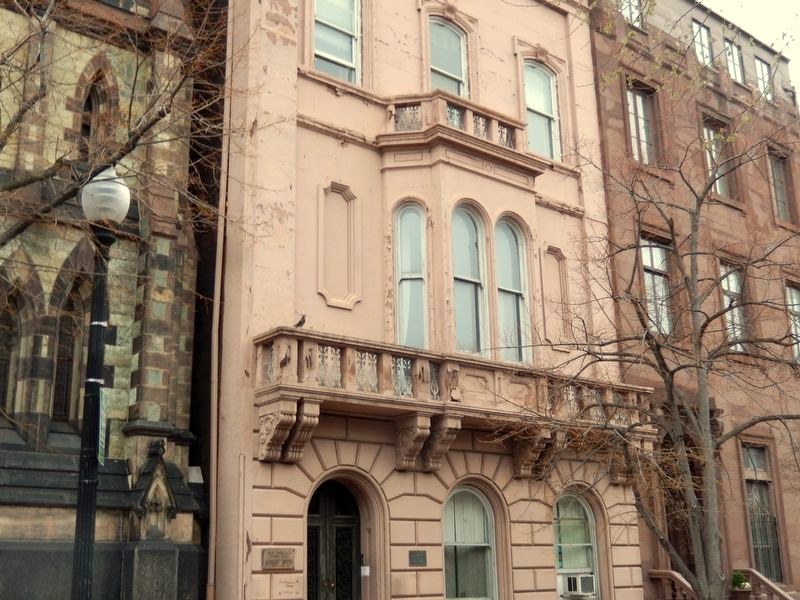 I almost forgot about one other conference move that I thought was very, very bad. Rev. Kenneth S. Jones was appointed to lead Mount Vernon in the late 1970s and early 80s.

He was an absolute dynamo! He built up the congregation, hosted a half-hour Sunday morning radio program and really put the church on the map. It was the only time we had a balanced budget in my memory.

Ken befriended then-Mayor William Donald Schaefer and was voted one of “Baltimore’s Best.” The church was truly alive!

But deciding that Ken would be a good district superintendent, the conference pulled him away from us at the peak of his ministry.

Within a few years, Ken was out as district superintendent. It was not his cup of tea. Another ill-conceived move by the conference, marking the beginning of our decline.

The pending subdivision and sale, I fear, will be the end of this process, dooming my beloved church to fall into neglect and disrepair like so many other urban houses of worship.

Can’t someone from city government – or from Baltimore’s many distinguished institutions – figure out a way to save this beautiful building and make it once again a place for the whole community to enjoy?

• John O. Mitchell III was baptized in the Mount Vernon Church in 1939 and served on its board of trustees for over 40 years before retiring in 2018. He is chairman of the Mitchell-Wiedefeld Funeral Home in Rodgers Forge.