The day before news broke that he was being investigated by federal prosecutors, City Council President Nick Mosby released a video entitled, “Commemorating the Council’s First 100 Days.”

The nearly six-minute film lauds the 15-member body, but is dominated by glowing testimonials from clergy and community figures about Mosby’s own character and accomplishments.

“Council President Mosby has always been that type of person that’s been a passionate leader,” says one. “Look at his history in Annapolis, look at his track history here in Baltimore,” declares another.

The next day Mosby’s office released still more to mark the milestone, a 40-page online magazine that includes:

• Photos of Mosby and Council members out in the community.

• Quotes from more people on Mosby’s virtues (e.g., “I could see his heart was for the people”).

• A promo for the first episode of a new podcast series (which Mosby hosts.)

And who is paying for the magazine, the video and all the rest?

The Baltimore taxpayer, it seems.

Produced by his Staff

Both the magazine and the video indicate they were produced by staffers from Mosby’s office.

“The First 100 Days Magazine is a publication created by the Office of the City Council President,” says the masthead on page 5.

Mosby’s director of legislative affairs, Nikki Thompson, is listed as a contributor. 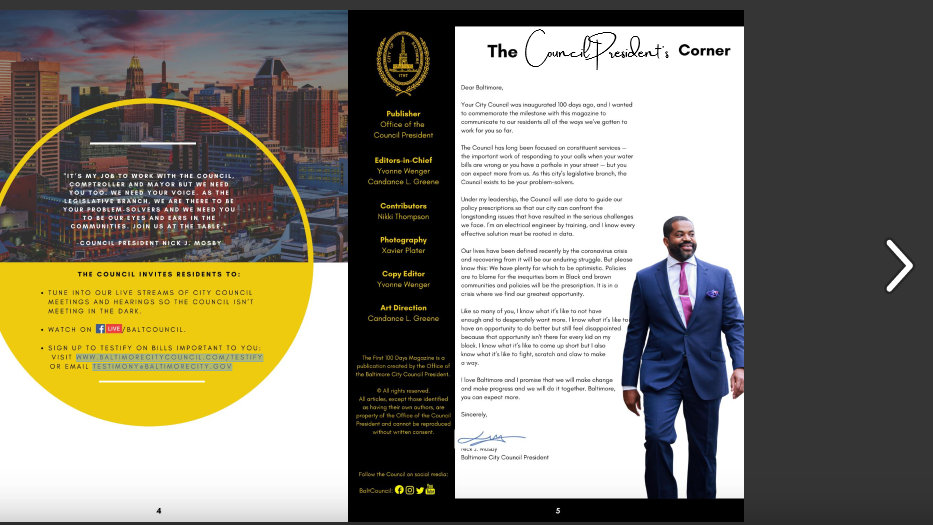 The photography, meanwhile, is attributed to Xavier Plater, whose Twitter profile says he is a “staff member of the communications visuals team for Baltimore City Council President Nick J. Mosby.” Plater is also listed as the person who produced the video.

Asked the cost of this multi-platform PR campaign, how many staff hours went into it and where the funds to pay for it came from, Wenger has not responded.

Another question Wenger was asked, but hasn’t answered, was about this:

© All rights reserved. All articles, except those identified as having their own authors, are property of the Office of the Council President and cannot be reproduced without written consent.

Language warning the public about reproduction of the magazine’s material is an unusual restriction since the magazine was produced by city employees as a presumably public document.

Concerned about the misuse of taxpayer money, a citizen has filed a complaint about Mosby’s 100 Days campaign to the Baltimore Office of the Inspector General, The Brew has learned.

The OIG declined to confirm or deny the existence of an investigation, but if the office does investigate, the review would take place in the shadow of a much larger probe.

Subpoenas from the U.S. Attorney’s Office have been served on Mosby, his wife, State’s Attorney Marilyn J. Mosby, and others seeking bank, tax, campaign and other records pertaining to the couple and their side travel and consulting businesses.

An image of Nick Mosby from the March 18 video released by his office. (YouTube)

This is not the first time that questions have arisen about Mosby’s budget and deployment of staff.

Mosby said the positions, which would cost an estimated $700,000 in salaries, were needed to professionalize the office. Scott questioned the need for the expansion, which included several new communications positions.

During December’s swearing-in activities, Mosby hired the private production company Storyfarm for media services, which included this video. The video was then broadcast by the public cable channel, CharmTV.

Wenger declined at the time to say how much the video cost, but said it was paid with funds raised privately by Mosby for the inauguration and that no public money was used.

Mosby is not the only elected official whose to-do list has included completing a 100-day report.

Scott’s State of the City address last Thursday was timed, like Mosby’s video, to coincide with the 100th day of his administration.

Earlier in the year, Scott created a “100 Days of Action Tracker,” an online tool where his administration’s progress toward a set of goals can be viewed.

For his part, Comptroller Bill Henry was succinct, if a bit tardy. Last Friday, his office put out a simple punch list of goals set, and progress made, in his first 101 days.