The Zoning Board has denied a Columbia-based company’s request to use a building on Harford Road as a residential substance abuse treatment facility, saying its previous approval was for a different use.

The address had been granted a building permit under prior ownership for an assisted living and adult day care facility, the Board of Municipal and Zoning Appeals (BMZA) said.

But the current owner, Clinic Management and Development Services (CMDS), is proposing to use the building, at 6040 Harford Road, as a 136-bed residential substance abuse treatment facility.

“Once a change, alteration, etc., occurs, new conditional use approval is required,” the BMZA ruled in a decision announced by acting executive director Kathleen Byrne.

Conditional approval may only be granted by a City Council ordinance, Byrne wrote.

CMDS officials have not yet responded to a request from The Brew for comment.

UPDATE: Kevin Pfeffer, CMDS founder and CEO, told The Brew in an email last night “we will surely not be going to the city council for approval of anything.”

“We had to go to the BMZA before filing suit. Which we will now do,” wrote Pfeffer. “If the City had any intention of permitting our facility to open, then they would not have devoted the past 1.5 years to making up contrived excuses to justify their illegal repudiation of our conditional use.”

The BMZA’s decision comes after an April 6 hearing in which lawyers for both sides made arguments and area residents raised a host of issues.

Councilman Ryan Dorsey did not attend the hearing, but sent a letter asking the Zoning Board to deny CMDS’ request for a use and occupancy permit because “it exceeds the board’s legal authority to grant the request.”

Last year, the 3rd District councilman returned $42,000 in campaign contributions he received from people connected to CMDS, saying he had “a clear conscience” about accepting it, but that relations between the community and the proposed treatment center would be better “without the specter of large campaign contributions.”

Residents at the April hearing touched on more than CMDS’ lack of a valid building permit.

They expressed concern about the project’s proximity to homes and a school, the reputation of its affiliated Turning Point clinic in East Baltimore, and whether people would receive appropriate care at the facility.

“We are interested in discussing the quality of care and the future of treatment and what would be the right measures to stave off the opioid crisis,” Angela Jancius, president of the Westfield Neighborhood Improvement Association, testified at the online hearing.

“We’re concerned about CMDS’ track record,” said Jancius, noting that “both my parents passed away related to addiction.”

Representing CMDS at the hearing, attorney Justin Williams argued that the treatment facility was not a new use but an “intensification” of a previously approved use. He said he wanted “to hammer home” that the company was not seeking to set up “a methadone treatment facility” as had been discussed on social media.

Williams said there would be no door facing Harford Road, patients would not be permitted to have vehicles, and could not leave the building unsupervised because “each window is alarmed.” 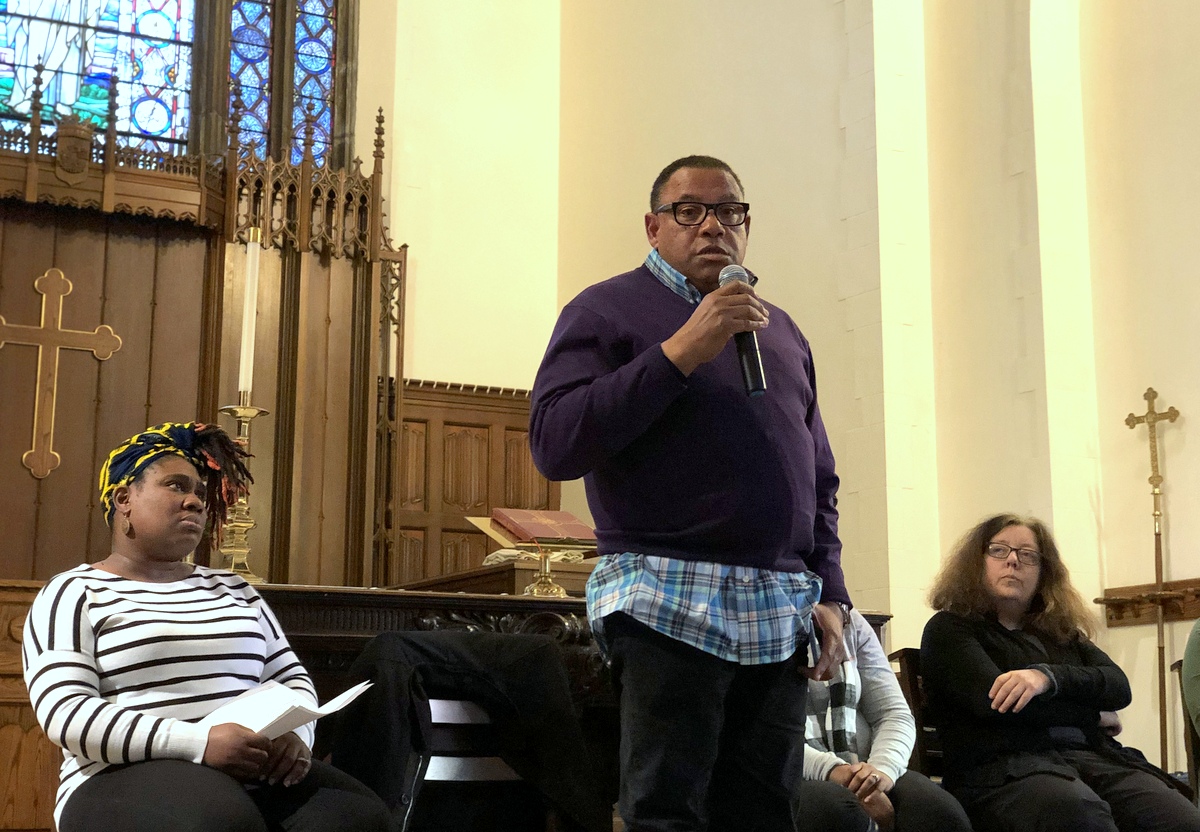 Bilal Ali, executive director of CMDS, speaks about the proposed treatment center at a community meeting last year. (Ian Round)

Such issues would have to be raised at a future Council hearing, should one occur. The Zoning Board based its June 17 decision on a more narrow question.

CMDS argued that since Transform Baltimore now governed, a drug treatment facility was allowed at the site.

The Zoning Board rejected that argument, holding that the prior approval was limited to what had been specifically requested by the former owner – assisted living and adult day care.

The opinion noted that if CMDS’ argument was accepted, “properties all over Baltimore” could make the same case.

“This decision has an effect beyond the immediate neighborhood,” attorney John C. Murphy, who represented the Westfield community and several individuals, told The Brew.

Because such requests would have to survive a City Council conditional-use hearing, Murphy said he believes the decision “protects neighborhoods and allows them to argue the pros and cons of a particular facility and its effects on the neighborhood.”