Baltimore City will pay $750,000 to two men who were loudly condemned and arrested for assaulting a police officer until new video evidence emerged showing that the officer had provoked the fight and then lied about it.

“He was attacked by ruthless, ruthless criminals,” Police Commissioner Michael Harrison told reporters on January 18, 2020 after a cell phone video, which went viral, showed people kicking Sgt. Welton Simpson Jr. as he made an arrest outside a business on Pennsylvania Avenue.

Maryland Gov. Larry Hogan jumped on the incident as did then-Mayor Jack Young, with Young praising the officer “for doing exactly what we pay him to do” and demanding that those who attacked him “be held accountable.”

12/7/22 UPDATE: Mayor Scott and the Board of Estimates unanimously approved the settlement award. Testimony by Deputy Solicitor Ebony Thompson disclosed that Baltimore Police continue a policy of not reviewing body camera footage in Level One incidents where no medical attention is needed. As noted below, the two defendants were jailed for six months before their attorneys gained access to Sgt. Simpson’s body camera footage.

Based on Simpson’s representation of the facts, Zayne Abdullah and Donnell Burgess were arrested and charged with numerous crimes, including second-degree assault on a law enforcement officer and resisting arrest.

Both men were held in pre-trial detention for six months before Simpson’s narrative was turned on its head by footage coming from his own body camera.

The footage, released to the public by the defendants’ attorneys, showed Simpson getting out of his patrol car to make a late-night security check at the convenience store.

As he tried to enter the store, Simpson bumped into a man later identified as Abdullah.

“Get the fuck out my face,” Simpson is heard saying.

The men exchanged words as people gathered around. Simpson was seen shoving Abdullah, and Abdullah pushing back, before the body-worn camera turns off. 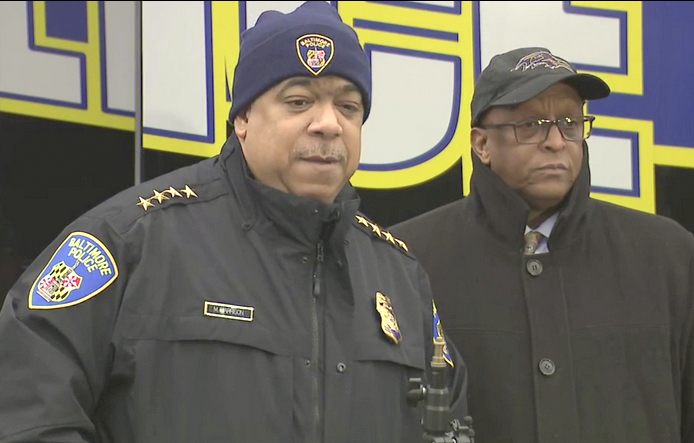 A second video, shot by a bystander and also obtained by the attorneys, started moments later. It showed Simpson tackling and holding Abdullah to the ground as he tried to arrest him.

Abdullah is yelling, “I can’t breathe,” while Simpson uses a mixed martial arts move prohibited by the police (Simpson was briefly a MMA fighter).

Another man, identified later as Burgess, tries to pull the men apart.

“You choking him! You killing him!” Burgess can be heard shouting.

Seconds after the confrontation, the cell phone video that went viral starts. It shows a woman yelling “beat him” as several people kick Simpson and others laugh.

The sergeant was found guilty, following a 2021 bench trial, of making a false statement and criminal misconduct. He was sentenced to one year of unsupervised probation.

Still on the force, Simpson – who earned $153,464, much of it on overtime, during the year the incident occurred – is currently appealing his convictions.

The now-dropped lawsuit alleged that two other officers and two former BPD majors colluded in the cover up.

Abdullah and Burgess, meanwhile, sued in federal court, claiming that the incident fell into an established “pattern and practice” of unlawful policing by Baltimore cops.

In return for the men now dropping that lawsuit, which also alleged that two other officers and two former BPD majors colluded in the initial cover up, city lawyers agreed to pay $375,000 each to Abdullah and Burgess.

The matter will go to the Board of Estimates next Wednesday for final ratification.

The lawsuit described Simpson’s other scrapes with the law, most notably a domestic violence case involving his ex-wife.

“Welton Simpson Jr. raped and held me against my will with two guns, one being his service weapon for the Baltimore City Police Department,” the woman said in an October 2009 court petition, further alleging that Simpson threatened her with two options:

“Either he shoots me, then kills himself. Or I shoot him and tell the police it was self-defense.”

Under a protective order, Simpson was required to surrender his firearms for three months and stay away from the victim, according to the complaint.

Instead of terminating the officer for cause, the lawsuit accused police leadership of allowing Simpson to go on desk duty, then return to the street “without scrutiny” after the protective order expired.

The “do not call” list was made public last year after a judge ordered State’s Attorney Marilyn Mosby to release it.