Note: Following last week’s razing of a homeless encampment – and on the eve of a City Council hearing on homelessness – we asked the director of the Homeless Persons Representation Project to write about the city’s strategy to deal with the estimated 4,100 people who live on the streets.

Last Friday, City Hall ordered the dismantlement of “Camp 83,” an encampment of homeless people along the Jones Falls Expressway in downtown Baltimore where about 20 people had been living – in some cases for as long as five years.

Until one week ago, the only offer by the Mayor’s Office of Human Services was to point the residents toward emergency shelters, an unacceptable option from any point of view except the city’s.

Emergency shelters in Baltimore City are congregate living environments, rife with illness and lacking any privacy for those with severe mental illness.

The encampment residents articulated well their horrific experiences in the city’s shelters, including sexual harassment and theft, as the basis for their stay in the encampment.
________________________________
WHAT: Public hearing on Baltimore’s plan to end homelessness
WHEN: 5 p.m. Wednesday, March 13
WHERE: Du Burns Council Chamber, 4th floor, City Hall, 100 N. Holliday St.
_______________________________
Not only did the city fail to respond to these concerns or launch an investigation into the claims, it responded by telling the residents to return to the emergency shelters – the very location of their harm – all under the excuse of public safety.

Countries that many Americans assume are less advanced have recognized the inhumanity of such action. In 2006, a judge of the Supreme Court of Appeal in South Africa ordered the government to rebuild an encampment after it was destroyed, saying: “For to be hounded unheralded from the privacy and shelter of one’s home, even in the most reduced circumstances, is a painful and humiliating indignity.”

As a community, we must fight the assumption that people living outside are doing so in protest of any shelter rules or because of any dependency on illegal activity.

The bottom line is that this city lacks enough transitional or emergency shelter to house the entire population of homeless persons in Baltimore. 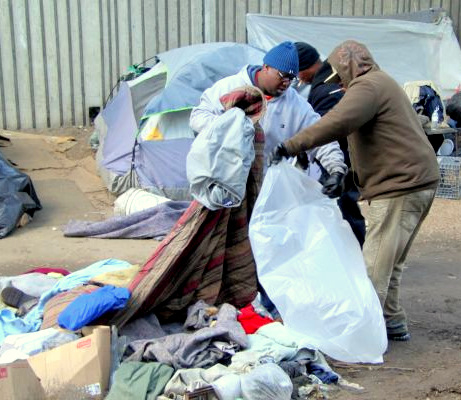 City workers raze Camp 83, a homeless camp tucked beneath the Madison Street on-ramp to I-83. (Photo by Fern Shen)

No matter what excuse city officials develop as a reason to demolish Camp 83 or any other encampment, we will continue to have encampments until the Mayor and City Council provide enough permanent housing to truly end homelessness.

To date, they have failed in this regard.

Fortunately, Baltimore has an opportunity to reverse course as it updates and revises its 10-year plan to end homelessness known as “The Journey Home.”

In a City Council hearing tomorrow, the community will have an opportunity to insist that housing become the priority in ending homelessness. City officials can seize the moment and commit to doing better by providing real help in moving people off the streets into permanent housing.

The city can and should commit to providing permanent supportive housing before any more encampment destruction. The alternative is to continue to engage in destroying the lives of the most vulnerable among us.
________________________
Antonia Fasanelli is executive director of the Homeless Persons Representation Project, a nonprofit law firm that provides free legal services, including advice, counsel, education, representation and advocacy, for low-income persons who are homeless or at risk of homelessness in Maryland.