Despite a stinging audit critiquing their practices, Baltimore’s liquor commissioners gave approval last week to another application for a liquor license without all the proper documentation.

This time it was for the Horseshoe Baltimore casino now under construction on Russell Street.

It happened at the June 20 meeting of the Board of Liquor License Commissioners. The statute requires signatures from three Baltimore City property owners who have known the applicant for at least two years.

But documents on file with the board show that the three people providing signatures attesting to the character of casino general manager Chad Barnhill – all employees of the law firm representing the casino, Rosenberg Martin Greenberg LLP – haven’t actually known Barnhill long enough.

The third person, a paralegal at the firm, indicates in the document that she has “just met” Barnhill, whose application was approved by the three-member panel on Thursday.

First reported by Christina Schoppert Devereux in her latest post on her Community Law Center blog “Booze News,” the information was verified over the phone today by Liquor Board chairman Stephan W. Fogleman.

“We may have to revisit that, if that is the case that it’s required for this license,” Fogleman said. “I’m going to ask staff to look at that.”

Fogleman was referring to the fact that the casino receives its permission to serve liquor under under the provisions of a “Video Lottery Facility” license created last year by the legislature. 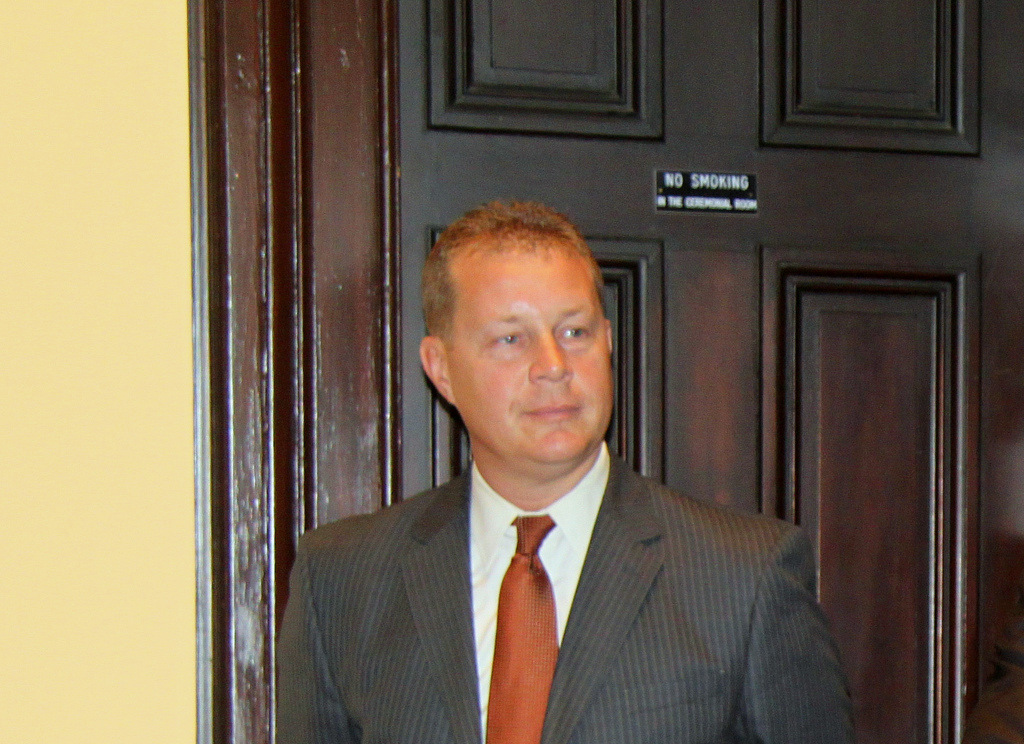 Fogleman said he needed to check whether the VLF license has the same requirements (for who must sign those letters) as the standard liquor license. “This VLF license is so new,” he said. (Attorney Devereux’s reading of the law is that it clearly does.)

If it turns out Fogleman and the board must ask Barnhill to go out and find property-owning Baltimoreans who will attest to knowing him for two years, that may not be easy.

Turns out Barnhill (previously an assistant general manager for the Horseshoe Casino and Hotel in Bossier City, Louisana) lives now in Woodbine in Howard County.

“It’s true, the man does not live in the city,” Fogleman confirmed.

Devereux said that, in itself, it may not be “a huge deal” if the signatures are not from people who know the applicant long enough according to the statute. (One of them, the paralegal, does not own property in the city, in addition to only just having met the applicant.)

But the lapse, Devereux said, is part a widespread pattern sharply criticized in the audit and something she has been noticing and writing about on the blog – applications that lack all the required documentation still being approved by the three commissioners in their weekly public hearing.

Devereux addressed this issue in remarks in a previous Brew story, noting that “approval” of a liquor license does not imply “issuance” of the license, which happens afterwards and is carried out by the liquor board staff.

Fogleman, who called The Brew to take issue with the “impression” that readers might get from our reporting and Devereux’s blog, said the staff works diligently to dot all the i’s and cross all the t’s.

“I can assure you that the staff – from the time an application leaves the hearing room until the license is issued – works through a detailed laundry list of things they have to do on it,” he said.

“I don’t think it’s the board’s job to go through and check every document. We rely on staff to do that.”

What then to make of the fact that the auditors concluded that documentation was not being consistently checked after approval and before issuance? The audit found that 28 out of 30 licenses did not meet all legal requirements.

“That was a big wake-up call for the board and we have new management [Douglas Paige, acting executive secretary] who is cross-training the staff to go through all the steps necessary to release a license,” Fogleman said.

Fogleman said the board “appreciates and welcomes” Devereux’s blog and has already made some changes as a result of it. He has, for instance, publicly announced that from now on that there “will be no mystery” about the vote count, and that all votes will be assumed to be unanimous unless  a dissenting vote is specifically announced.

We asked Fogleman about the other point Devereux made – that letting the staff have so much responsibility to finalize major parts of the application away from the hearing room limits the public’s involvement and gives citizens less of an opportunity to  valuate an application.

He urged citizens, or their attorneys, to bring such issues up to the board at its meetings. “A blog is not on the public record,” he noted

False Statement is not, Technically, a Problem!

One other item noted in Devereux’s blog was a part of the application that was flat-out wrong, but the information is not required for the special VLF license.

The erroneous statement regarded the applicant, Barnhill. The three law firm signatories certified, incorrectly, that the applicant “has been a taxpayer or resident of Baltimore for more than two years, and a resident of the State of Maryland for two years and a registered voter of the state.”

That provision is required for most license types, but not this one.