Foul-smelling restrooms, tequila being served to minors and an establishment where nine female “club promoters” behind the bar appeared to possibly be there “for immoral purposes,” in the words of the Liquor Board chairman.

These details emerged from the agenda items before the Baltimore Liquor Board on Sept. 19, stemming from an enforcement crackdown that netted an assortment of licensees from across the city. Almost all of the establishments were alleged to have broken the rule prohibiting the sale of alcohol to minors.

Working with city police, one “underage informant” was served a shot of Patron tequila at Grant’s Two Spot in West Baltimore; meanwhile at Birrotecca in Hampden another got a pint of Allagash beer, according to the Community Law Center’s lawyer/blogger Becky Witt, reporting on the board’s latest weekly meeting as part of their watchdog blog, Booze News.

In his client’s defense, attorney Gary Maslan said the mistake was understandable because the 19-old-police cadet “was dressed up very attractively that evening!”

This caused the bartender to think she was 30 years old, said Maslan, who was representing the Admiral’s Cup in Fells Point where police said the cadet was served a Miller Lite.

The commissioners found that Admiral’s Cup (and Birrotecca and Gary’s 2-Spot, among others) had violated the underage drinking law, according to Witt.

Since then, Admiral’s Cup management has instructed staff now to ask for ID from anyone who appears to be under 35, Maslan said, adding “35 doesn’t look the way it used to.”

Booze News was created in part to follow up on a highly critical audit of city liquor regulation, released by state legislative auditors in March.

But as Witt noted, the audit found that rule violations were not one of the most serious problems with the board and that “[f]ines assessed by the Board appeared to be reasonably consistent within violation types.”

The Sept. 19 hearings described in her lengthy post might best be viewed as an example of the kind of community nuisance issues that arise around city establishments that serve liquor. 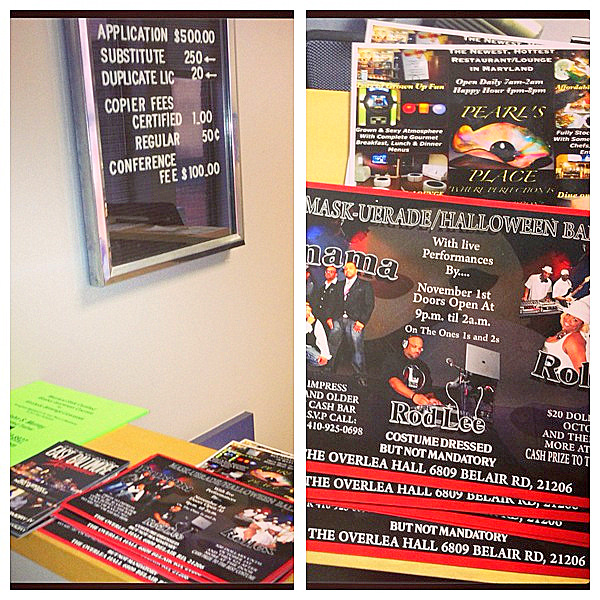 A city police detective, for instance, according to Witt, described several health code and liquor violations he observed at Main Street Bar & Liquors, on Eastern Avenue in Highlandtown – everything from fly infestation, to staff drinking behind the bar to the aforementioned “club promoters,” for whom the licensee had no employment records.

The detective said he shut the bar down on June 14, but when he returned, it was reopened, Witt reports.

The establishment’s attorney said the 23-year-old licensee was young, had learned his lesson and had corrected the problem. Responding to Chairman Stephan W. Fogleman’s observations that the female “club promoters” may have been there “for immoral purposes,” the establishment’s lawyer “vehemently denied it,” Witt writes.

“He stated that these women had families and some of them were married.”