The city Liquor Board may be under new leadership, but it is still making decisions that a legal observer says ignore the law and are “concerning and confusing for the community.”

Among those concerns – prolonging the lives of “zombie” licenses clearly dead by law and decisions made without a vote by all three commissioners but instead by the announced decree of Chairman Thomas Ward.

One of those cases recently involved a strip club on The Block where, according to the police report, a dancer had been choked until she blacked out and the main police officer involved in the case did not show up to testify.

The charges were dismissed, but the board never took a vote to do so.

“Chairman Ward alone announced that they were dismissed,” wrote attorney Rebecca Lundberg Witt in her watchdog blog report on the August 21 hearing. The same thing happened with other cases, including a subsequent strip club violations case.

Resolution Announced Before Case Was Heard?

Even more concerning was the way the decision was reached in the matter of the Latin Palace, which was facing new charges of violations after a previous appearance before the board in which the Fells Point club’s license had been suspended for holding events not permitted under its license.

Before the hearing began, Chairman Ward said to Mr. Smith, “I have something to propose to you,” speaking to Edward Smith Jr., the former Liquor Board commissioner who was serving as the licensee’s attorney.

“The Board is possibly willing to impose the same sanction” (i.e., to have the punishment run concurrently with the previously received sanctions). . . 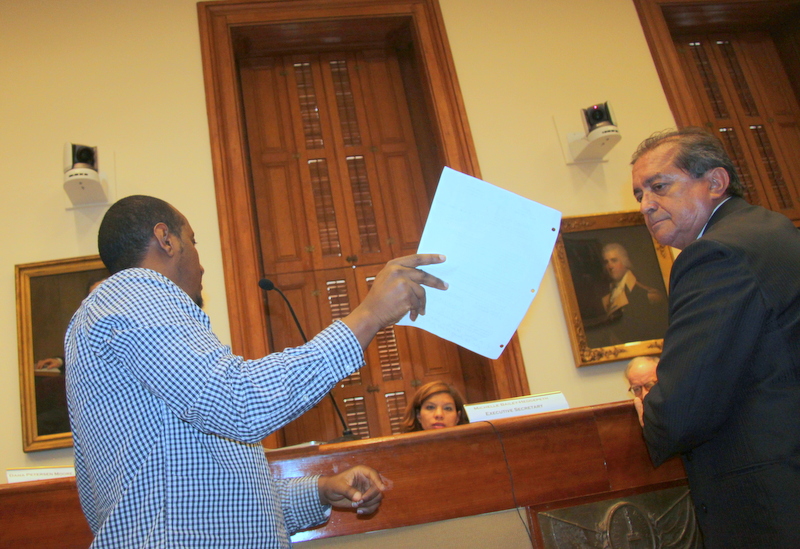 Ward’s offer to cut a deal with the licensee  “before the hearing even began or testimony was heard is concerning and confusing for community members,” Witt wrote in Booze News, a project of the Community Law Center.

There was lengthy testimony about the case, in which licensee Jose Enrique Ribadeneira was charged with allowing a sub-tenant to renovate the upstairs portion of the club at 509-513 South Broadway and hold events there.

Ribadeneira, who had called the Liquor Board to report the renovations, said he did not know the tenant, Yeneneh Hailu, had made the changes and that he hadn’t given permission for a restaurant, hookah bar and nightclub. He said the establishment was supposed to be “a gathering place.”

But after looking at the lease agreement and hearing testimony from Yeneneh about how much he agreed to pay Ribadeneira and other details, the Liquor Board’s other new commissioner, Dana P. Moore, concluded, “I think it’s pretty clear what happened.”

Moore added that it was her opinion “that the call to the Liquor Board from the licensee was out of anger at Mr. Hailu in the dispute over money,” Witt wrote. She and her fellow commissioners voted unanimously that licensee Ribaneneira was in violation.

Still, Witt was disturbed by the way the case ended up.

“When the Board finally reached its decision on the matter (which is the same decision that the Board essentially gave before hearing any testimony), the Commissioners gave no explanation for why the punishments should run concurrently,” she observed.

There were other cases where Ward seemed bent on coming up with an informal solution, skipping over procedure and the law.

One such case was Serenity Lounge at 1175-73 Sargent Street, which sought and was granted a license transfer. Witt said the board did not address the actual legal issue at stake, which is whether or not the license is valid under Article 2-b Section 10-506.

“The community association was appeased with the promise that the license would not reopen in their neighborhood, Witt wrote.

Witt determined that laws were not followed in about two thirds of the cases that came before the board at the August 21 meeting.

Most of the questionable decisions, according to her observations, involved “zombies” – licenses transferred or given hardship extensions even though the establishments had been shuttered longer than the law’s 180-day limit.

One of the more extreme examples involved Lil’s Place at 1909 North Pulaski Street in the Mondawmin neighborhood.

Firefighters putting out a March 8 fire next door damaged her store, licensee Lillie Driver told the commissioners. The commissioners then voted 2-1 (with Ward voting “no”) to grant Driver an extension.

Witt, citing the records on file, said the license was legally dead before the fire:

We asked why Samuel T. Daniels Jr., the Liquor Board’s former-executive-secretary-turned-liquor-licensee-consultant, was behind the podium during a recess of the board’s August hearing.

“Are you just here for the sport of it?” Bailey-Hedgepeth had asked Daniels.