The offense that shut down the bright green-and-yellow-painted Oxford Tavern for three days this week – and cost them a $500 fine – might at first sound minor:

On September 7, inspectors visiting the establishment at 1741 West North Avenue were not allowed to enter the bar area, and patrons were kept out too. According to the inspectors, manager Sung Koo Kang refused to let them in, saying the television wasn’t working.

But the visit was part of a special Liquor Board task force sweep aimed at a chronic problem that has generated complaints from neighborhoods for years – cut-rate liquor stores masquerading as taverns.

To do an extra day of business, some liquor stores obtain tavern licenses (called BD-7s) and become a “tavern” in name only, doing little or no on-site consumption business at all. The so-called “tavern” can be as small as a couple of bar stools and a T.V.

Licensees have gotten away with this in the past, but Transform Baltimore, the city’s omnibus rezoning legislation, and reform propelled by the 2013 Liquor Board audit could change that. The agency appears to have ramped up its inspections and enforcement, as a result.

Last week the Liquor Board cited two taverns for not operating as their license requires, including Oxford.

Testifying at the Thursday hearing, inspector John Howard said that stock and other items were on the bar’s counter, which “demonstrated that this area was not open to the public.”

He said he reminded the Oxford’s proprietors “the tavern had to be open. . . whenever the package goods department is.” 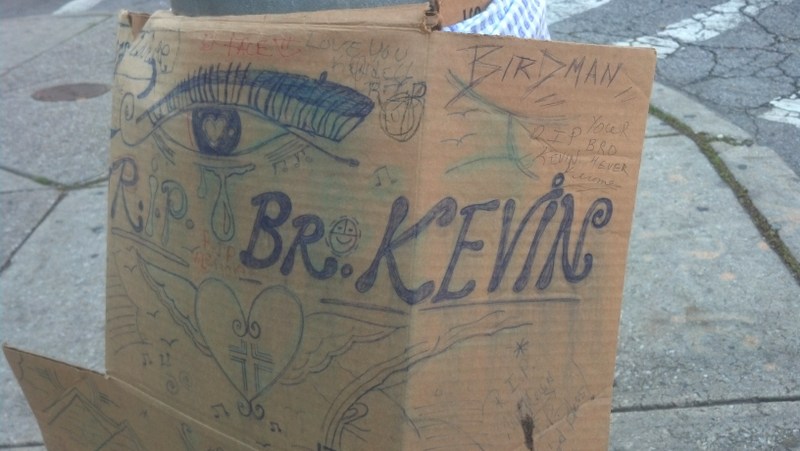 Cardboard “RIP” memorial to a murder victim on a utility pole outside the Oxford Tavern on North Avenue. (Photo by Fern Shen)

Kang told the board the tavern has push-button access.

“They shouldn’t have to ask you to get into the bar,” said commissioner Dana Petersen Moore.

Inspectors said that they had similarly been denied access in June.

But community leaders had other complaints about the establishment.

Loitering and a Stabbing

Marvin L. “Doc” Cheatham, representing the Matthew A. Henson Community Association, told the board that the residents “have real concerns” about the tavern, specifically loitering and a recent murder – a man stabbed to death on the 1700 block of West North Avenue in broad daylight near the store.

“You are not telling this commission the truth. Your bar is not continually open, and we can’t get you to communicate with us,” Cheatham, former president of the Baltimore Chapter of the NAACP, said.

“We want to work with you. There’s this continual impression that you don’t understand English,” Cheatham said.

Chang Bom Park, the licensee, told the board, “If they want us to shut down, they should ask my customers. If my customers want me to shut down, I will.”
Cheatham said, “I am the neighborhood. I live a few blocks from you.”

Moore said she was disturbed to hear about the behavior and called the violence “sad for Baltimore.” She instructed the licensees to work with the community to improve communication and reduce loitering.

Liquor Board Chairman Thomas Ward told them to “learn better English. . . so you can control your business and not have to come back here.”

Everyday’s, a tavern at 1600 Abbotston Street in Northeast Baltimore, was fined for the same violation, but its impact on its blighted community was the real topic of discussion at the hearing.

Mark Washington, executive director of Coldstream-Homestead-Montebello Community Development Inc., and City Councilwoman Mary Pat Clarke, of the 14th District, spoke to the board about the tavern. 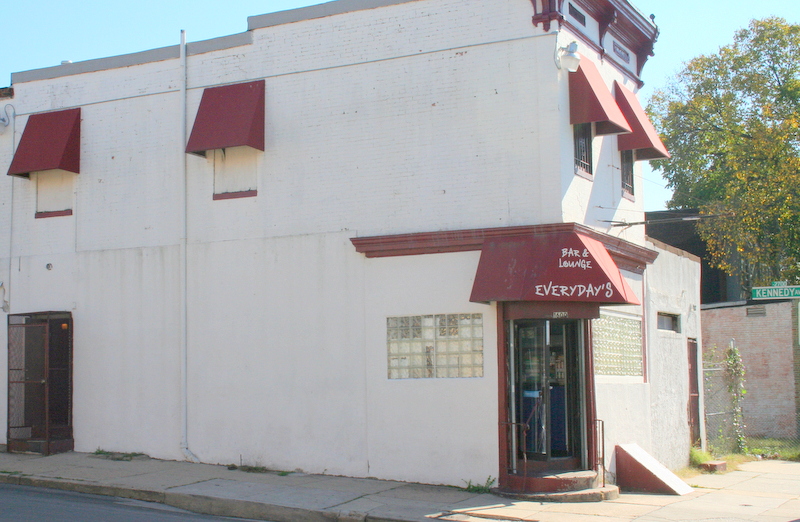 Everyday’s in Northeast Baltimore was fined $500 as community leaders complained of fighting and loitering by bar patrons. (Photo by Danielle Sweeney)

Washington said his organization had no problem with the bar, per se, but with its patrons and chronic loitering.

Aside from the violation, operationally, “they haven’t’ done anything improper,” he said.

“But the location, the fights, the murder nearby, the beating up and attacking of the girl who lives on the 1700 block of Abbotston. . . are a direct result of the patrons from the bar,” Washington explained.

In fact, Washington said, “the genesis of the complaint [the request for an inspection] comes from the family of a murder victim who was an Everyday’s patron and was stabbed on his way home.”

Washington noted that only six of the 32 homes near the bar are occupied. The rest are vacant and derelict and owned by absentee landlords.

“You need a stable neighborhood to have a stable tavern. This is a cluster of blight.”

“Get This Operating Properly”

Calvin Mims, an Everyday’s employee who lives across the street, told that board the reason the tavern portion was not open is because he was taking a break on a slow day.

“Business dies down near the end of the month,” he said. (The violation occurred September 19.)

Councilwoman Clarke said the 1700 block of Abbotston Street was a stable area with many homeowners, as was the 1500 block.

“We are working hard on this middle [1600] block. We’re trying to clean it up and redevelop it,” she said.

Lamont Cosby, who also works at Everyday’s, asked why Clarke didn’t come to the tavern herself and complain.

Ward explained to Cosby that she was a City Council member. “She doesn’t have to apologize to you for not complaining in person.”

Cosby conceded that the neighborhood is in “a bad area” and said he understands the problems. “There’s one house with 20 people living in it. These people are terrible.”

Clarke said, “I know what you mean. I will address that house. . . but we need your patrons inside or they buy [alcohol] and go home, not loitering outside.”

She added that if they didn’t get the tavern running properly, the community would protest the renewal – or try to shut them down.

“We’re Not Punishing you for the Neighborhood”

Ward told Washington and Clarke he appreciated the overview they gave of “the entire problem.”

“But the only thing before us today is the tavern area not being open,” he said. The board noted that Everyday’s had no other recent liquor violations. 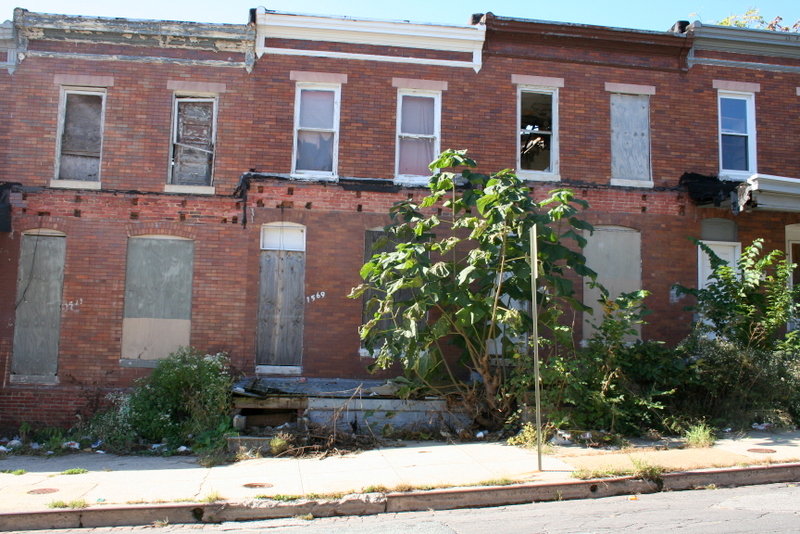 There are lots of vacants in the neighborhood around Everday’s tavern. (Photo by Danielle Sweeney)

“The reason you haven’t had any complaints,” interjected Washington, “ is because there’s eighty percent vacancy. Who is going to call to complain?”

Cosby protested that the bar shouldn’t be punished because there’s a lot of vacancy.

Ward replied, “You’re here for a violation. We’re not punishing you for the neighborhood.”

Cosby asked the board if there was a way for the tavern to allow only patrons over 30. “Or is that illegal or discrimination?” he asked.

Moore replied in exasperation, “You guys really need to learn what the laws are.”

The board was torn on Everyday’s penalty. Ward asked for a week suspension, Moore wanted longer. Commissioner Harvey E. Jones said three days and a $500 fine.

“I’ll go with Mr. Jones just to be consistent within this hearing,” said Moore. Consistency with punishments and fees has been a challenge for the board.

Everyday’s licensee, Nedtria Guy, did not attend the hearing. “Why isn’t she here?” asked Moore. She was in Florida, Cosby said.

“She needs to be here,” Clarke said. To which Ward added: “You’re not kidding.”