The violations that came before the Liquor Board yesterday regarding Favorites Pub, a Loyola University student hangout on York Road, were egregious enough. Chief among them was a recent raid by police in which 105 of 125 patrons were found to be underage students.

The anecdotes of community members who testified before the liquor commissioners were more icing on the cake.

Steven Jones, who lives near the bar, which is popularly known as Craig’s, said he has found drunken patrons peeping into his house and having sex in his truck. Sometimes he has to clean up used condoms.

“How do you know they came from Favorites?” asked Melvin Kodenski, representing the bar’s licensees?

“I asked them,” answered Jones, one of a number of witnesses to testify that the bar has been allowing underage drinking and causing a neighborhood nuisance for years.

By the end of Thursday’s hearing, the board unanimously voted to shut the bar down for 104 days for serving minors, following additional testimony from Baltimore City and Loyola University police.

Representing area residents, Community Law Center attorney Rebecca Lundberg Witt said she was glad the bar was closed, but said she had requested in writing that the board go further and revoke Favorites’ license.

“I think there was more than enough evidence to support a revocation,” Witt said. “Having to come back in and protest the renewal of the license is a step that I was hoping that we could skip, given the outrageous violations.”

City police officers recounted the incidents that formed the basis of the violations. 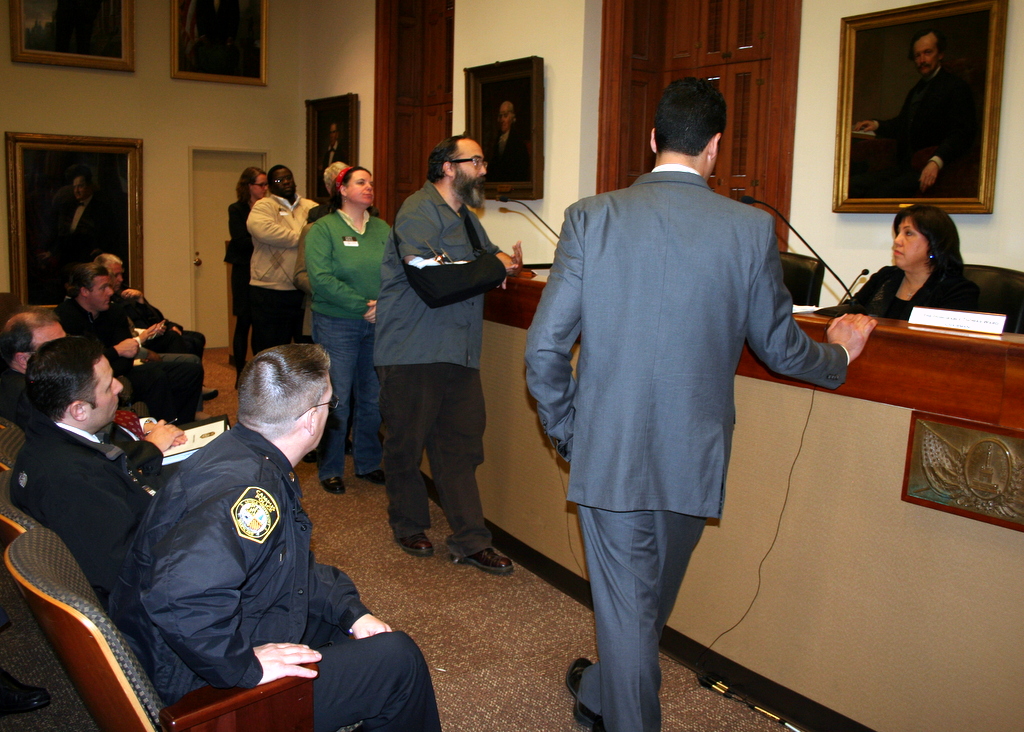 Steven Jones tells the board how bar patrons have peeped in his windows and copulated in his truck. (Photo by: Danielle Sweeney)

One was an October 25 raid  when 105 underage Loyola students were removed from the premises and sent home, most uncharged, on Loyola buses.

The students identified themselves as underage students who had been drinking alcohol at Favorites/Craig’s, Loyola police told the board.

Some were so drunk that they vomited in the buses on the way back to campus.

A subsequent violation took place on December 4. Another four Loyola students were caught by Baltimore police drinking alcohol at Favorites during another operation launched because of “numerous complaints of underage drinking,” the police incident report said.

Robert Maglia, an investigator with Loyola’s police department, told the commissioners that last year alone there were 19 public safety incidents on campus involving students who had been drinking at Favorites. They included indecent exposure, a sex offense and a burglary.

Favorites licensee and co-owner Jeffrey Evans said his staff is vigilant about not serving minors and runs all IDs through a scanner, which was purchased over the summer. The establishment turns away “hundreds of fakes every week.”

The students who got in both nights, Evans said, either had good fakes or were using someone else’s real IDs.

Thomas Akras, deputy executive secretary for the Liquor Board, asked if the scanner had records of IDs scanned on the nights in question.

Evans said no. He did not save or record the scans from those nights, saying that the scanner overwrites after every 2,000 swipes.

“It was an absolute oversight on my part. My worst oversight,” he added.

A half-dozen community members, as well as 4th District Councilman Bill Henry, provided brief testimony on their experience with Favorites, which they said has a history of serving minors.

Jones said not all college bars are so lax. “Murphy’s [another bar frequented by Loyola students] is much tougher” checking IDs, he said.

Chris Forrest, president of the York Road Partnership, said his organization had reached out to Evans twice, once with Councilman Henry, with the hope of getting Favorites to sign an MOU (memorandum of understanding) with the community.

Forrest said another college bar in the area had signed one, but Favorites did not.

After a three-hour-plus hearing, Liquor Board Chairman Thomas Ward characterized Favorites as “an absolute detriment to the community in every respect” and called for its immediate closure.

“I am totally unconvinced of the licensee’s testimony,” he said. “My suspicion is that they [underage students] were not even carded at all.”

Commissioner Harvey E. Jones said if he were the licensee, he would have told the board about his plan for “corrective action” so such incidents wouldn’t happen again.

But the licensee, he said, didn’t have such a plan. “This is about money. How much money can I make,” Jones concluded.

Commissioner Dana Petersen Moore said there was no better way to sum up the case than “Oh shit, I’ve been caught,” echoing a comment made by an underage student quoted in a police report.

Favorites was ordered closed until April 30. The bar is expected to appeal the decision.