Two sides had come before the Liquor Board for an all-too-familiar matter: a seemingly dead liquor license asking for a transfer.

The address in question was 2022 North Charles, where a gay bar called The Baltimore Eagle was in business from the early 1990s until it closed in December 2012. (Its new owner, Ian Parrish, has said that, after extensive renovations, he plans to reopen it under the same name and along the same lines.)

But when the sparks started flying at Thursday’s hearing, it wasn’t about the legal issues at hand or about the nature of the establishment seeking the transfer.

What flared up was a classic Baltimore turf battle between community associations.

“I am very surprised and disappointed to see Ms. Sparks and Ms. Knight here speaking on behalf of [the] community when in fact the Old Goucher membership deeply resents Charles Village’s continued interaction and involvement in land-use affairs,” said Old Goucher Community Association president Kelly Cross, who began his testimony with this statement.

Cross said the boundaries of the Charles Village Civic Association (which was represented by Jeanne Knight and CVCA President Sandy Sparks) do not extend as far south as the address in question, which is just south of the 21st Street intersection.

Contradicting him sharply at that point was not Sparks or Knight, but rather Dana Petersen Moore, one of the three Liquor Board commissioners hearing the case.

“You’re wrong! The boundaries of the Charles Village Civic Association go all the way down to 21st street. I was president of the CVCA when we had the opportunity to reconsider our boundaries, and we specifically voted to continue our boundaries as they were.

“Specifically because we did not want to turn our back on a part of Charles Village that was in much, much need, and we wanted to be part of the renaissance that was occurring in that area. So you are wrong.”

Cross tried to speak, but Moore continued: “You are absolutely wrong when you say what the boundaries are, and don’t cut me off.”

A Hooters for all we Know

The testimony that followed got into snippy emails and negotiations between Charles North and the developers that had clearly broken down.

Old Goucher (which defines its turf as 20th and 27th Streets between Howard Street and Guilford Avenue) has split off from the Charles Village group, differing with them over the 25th Street Station/Wal-Mart controversy and other matters.

Sparks said she was also chair of the new Greater Charles Village Land Use Council that has recently formed as an umbrella group in North Baltimore. With Sparks and Knight was Alan Mlinarchik, who took the lead and said he is a member of the board of the Charles North Community Association and represented the Council, which he described as “a coalition of the willing.”

(Mlinarchik contends that Charles North is “the community association of record” for the liquor license matter in question, saying that the group’s northern boundary is 22nd Street.)

Board Chairman Thomas Ward did his best Thursday to push through the bickering to get the parties to stick to the substantive issue at hand.

“Yes, but what is your position?” Ward asked again and again. Sparks finally said the CVCA opposes the transfer because the Parrish group has not told them what kind of establishment they plan to put in that spot.

“It could be a Hooters for all we know,” Knight said.

Pressed to address the reasons his group supports the transfer, Cross said the residents he represents want to see a restaurant, bar or other night-time business to help boost up the area: “That part of our neighborhood dies after 5 pm.”

Cross said Old Goucher is “very comfortable” with the concept of the establishment that Parrish has in mind.

And what of the legal issues? As Moore pointed out, since the business has been closed for more than 180 days, under the law “this license is effectively dead.”

The applicant’s attorney Melvin J. Kodenski, promised to prepare a legal brief citing case law he said would give the board latitude to make an exception to the 180-day rule based on the kind of delays the applicant experienced.

(Kodenski doesn’t have much of a case in the opinion of Community Law Center lawyer Rebecca Lundberg Witt, who offered her analysis in the latest installment of her watchdog blog, “Booze News.”)

Parrish told the commissioners that the poor condition of the building and other problems he encountered on the project were things he could not have anticipated when he bought it.

“We took bedsheets off the wall covering structural problems. . . there were goods and memorabilia collected over 30 years. It was 10,000 square feet of hoarder space,” Parrish said, adding that he sold some items and removed “a Dumpster a day for 30 days.”

He said he has put $150,000 into the project, not including acquisition, and will need a $1 million investment to complete it.

Parrish blamed his failure to open the business on those problems as well as delays getting an electrical line installed.

Bar Concept Up in the Air

But what kind of business will it be? That question was addressed by Christopher S. Willoughby, who described himself as “special advisor to the Parrish family of companies.” 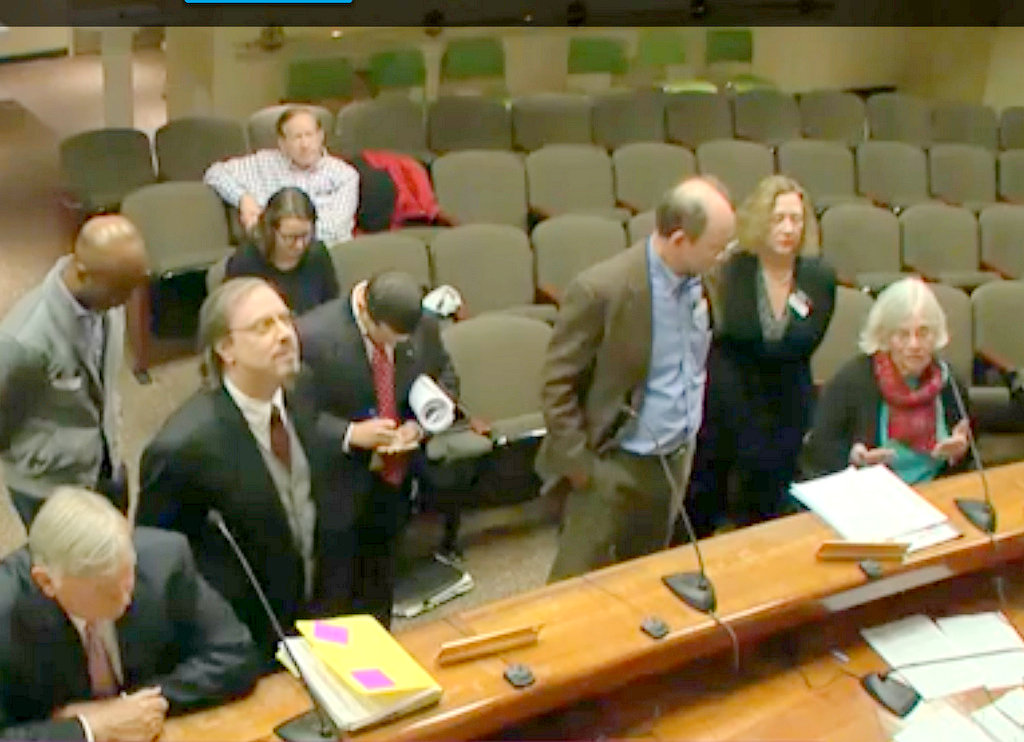 “As far as the building plan,” Willougby said, “there will be a first-floor assembly area in compliance with the liquor license. And 2nd and 3rd floor commercial structures that are not part of that assembly area.”

As for the concept of the business, he said, “I don’t know that we’ve made a final determination on that.”

But he added, “I think I can say that the business will be based on the good character of the persons who are going to own it.”

Parrish pleaded with Ward, saying that if he loses the license, his investment and work to date will be moot and “the building will sit empty.”

Ward said the commissioners will consider the testimony and Kodenski’s legal brief and make a ruling at their next meeting.

He told Parrish that he had read the file, including the testimonial of letter writers who said they thought his project would help revive a blighted neighborhood.

“They were very laudatory of you,” he told the applicant, “but it looks to me like maybe you bought something that you shouldn’t have bought.”