A cheerful-looking North Avenue landmark with its distinctive green-and-yellow paint job, the Oxford Tavern was the backdrop last night for lurid national coverage of the rioting in Baltimore, as this liquor store and others were the scenes of some of the worst looting in town.

The destruction is only the latest trouble to beset the Oxford, surrounded as it is by the violence that’s plagued the Westside neighborhood for years, including the October 9 fatal stabbing of a man in the same block.

Cheatham, president of the Matthew A. Henson Community Association, complained that the bar allowed loiterers and was associated with violence and drug dealing. 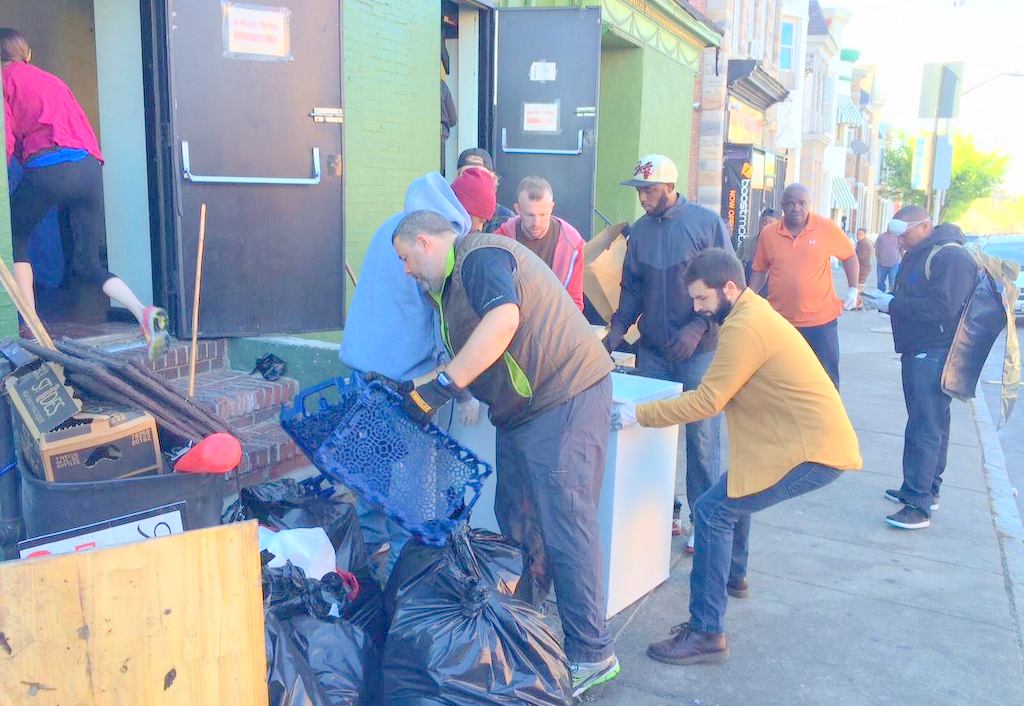 People showed up this morning to help the owner of the Oxford Tavern clean up the mess after last night’s looting. (Photo by Jim Burger)

The licensees, Cheatham said, weren’t working with the community. The three-member board seemed to agree – they ordered the establishment closed for three days and issued a $500 fine for violating the rules about the conduct of so-called BD-7 taverns.

The BD-7 issue has been a long-running source of complaint by community groups.

To do an extra day of business, some liquor stores obtain tavern licenses (called BD-7s) and become a “tavern” in name only, doing little or no on-site consumption business at all. The so-called “tavern” can be as small as a couple of bar stools and a TV.

Public health advocates, as well as city officials, have tried to come up with ways to reduce the number of liquor stores, taverns and bars, saying they are too highly concentrated in poor communities and promote substance abuse, crime and unhealthy lifestyles.

The effort has been controversial. When the city announced a plan to cut down on liquor establishments through zoning, the store owners and their lawyer cried foul.

Licensees shouldn’t be blamed for social ills they didn’t cause, they argued.

To be sure there are social challenges and extreme poverty in these neighborhoods. In Sandtown-Winchester (where the rioting took place and where the Oxford is located) the demographics are stark: 1% White, 96% Black, 0% Asian; 0% Hispanic ethnicity; 34% households have children under age 18; median household income: $23,974.

(This is according to Booze News, the watchdog blog set up by the Community Law Center to monitor the city’s Liquor Board, fabled for years of dysfunction and corruption.)

This morning local residents simply saw the stores as small businesses in trouble.

Volunteers from across the city showed up in a spontaneous gesture to help them, including liquor store owners. Donning gloves and grabbing brooms, some of the folks showed up at the Oxford and helped the owner clean up.

Photographer Jim Burger was one of those good samaritans, and he posted photos of the effort on Facebook.

He also wrote this:

This morning I took my broom and went to see if there was any way to undo some of the damage those idiots did to Baltimore last night. There isn’t. But as long as I was there I put the broom to work. I’ve never been in the Oxford Tavern, although I’ve driven by it enough. It’s at the corner of North and Fulton Avenues and took a real beating. The place is like 100 other package goods stores around town, maybe a little nicer. I got there at 8:30am and it was wide open. The local patrons, paying customers the other 364 days of the year, were still helping themselves. The owner showed up when I did and we just started shoveling broken glass and lottery tickets into garbage bags. He’s Asian and didn’t seem to speak much English. Eventually more people came. It looked like church groups, neighborhood people, volunteer types. A few hours later all the trash was out and plywood went up over the doors. I hope it reopens one day. If for no other reason than to prove that things can reopen after stupid shit like this. The owner shook my hand before I left. I don’t even know his name.