Over the course of an hour in front of the Liquor Board, the tables turned on East Baltimore tax preparer Mark Mellett, who had lodged a complaint against the business next door to his, the Mustang Inn, 3203 Eastern Avenue.

Mellett had come to last Thursday’s hearing to complain about an incident last month in which he said unruly patrons came out of the Mustang and caused a disturbance on the sidewalk, scaring him and a customer in his Ameritax business and requiring a call to police.

“We can’t enjoy our life, we can’t do our seasonal business,” Mellett said, noting that he has had problems with the bar for 10 years.

Pretty soon it was clear the commissioners were more disturbed about Mellett’s actions in provoking the May 15 incident.

On a Public Sidewalk

Three bridge painters had come into the bar after work and two of them, one Latino and the other African-American, after their first sip of beer, had gone outside to smoke.

(Below: the Mustang case begins at about 51:17 minutes)

When they got out on the sidewalk, a loud buzzer buzzed, a horn sound blared and barking dogs yapped – all part of an electronic alarm system Mellett has installed as part of a long-running conflict with the Mustang.

The system can be set to go off automatically with a motion sensor, but that day it was flipped on manually from the second floor by Mellett’s wife. (The couple lives upstairs.)

Licensee Ginger Cornejo testified the barmaid (“Miss Connie”) had warned the men to stand to the left. (Mellett’s business is on the right as you exit the bar.) When the men went outside and the alarm sounded, the barmaid went outside.

The men were angry, according to Cornejo, because “they were not doing anything wrong, . . . they were on a public sidewalk.”

Barmaid Connie Devenny testified that the bridge painters “did not disrespect me,” but were “enraged” about the loud buzzer and barking-dog sound and being asked to move.

The bridge painters were also angry because, according to one of them, Mellett had told the African-American painter to leave using a racial slur.

“He was enraged that [Mellett] called him that n-word,” said Devenny, who did not hear the alleged slur herself.

Mellett denied to the board that he used the slur, saying, “I don’t use that word.”

Moore questioned Mellett closely, asking what exactly he said to the men. 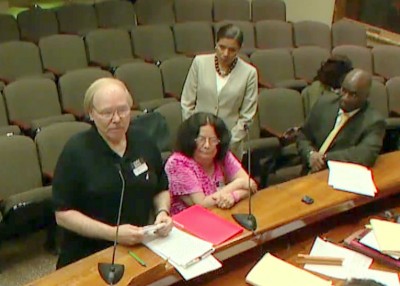 Mark and Dawn Mellett testify before the liquor board with Chief Inspector Shelton Jones to their left. (YouTube)

So you didn’t use the n-word? Moore asked.

“Honestly? No,” he replied.

“On a public sidewalk?” he asked repeatedly.

“The two dogs are Rex the Barking Dog Alarms bought on Amazon. They set up when you go near my door,” Mellett said. “We’ve had some incidents in the past where the was urination and puking.”

“At night we have a disco light and a red flashing light,” Dawn Mellett explained further.

Mellett said the motion sensor only extends to the vestibule in front of his business, but said his wife turned the alarm on manually that night because the men were cursing.

The police left without filing charges, and the men left after the barmaid gave them their money back.

According to Liquor Board Inspector John Chrissomallis, who followed up the next day, none of the nearby businesses, including The Creative Alliance and High Grounds coffee roasters, had complaints about the Mustang.

“I Heard About That Buzzer”

Several witnesses from the neighborhood, bar patrons, also gave testimony, saying they have found the Ameritax buzzer alarm system to be annoying.

“I sat over in front of Creative Alliance in the afternoon one day, oh it was well before 3 o’clock, and that buzzer went off,” said Mary Jane Ghiz, called up to testify by Mustang’s attorney Melvin J. Kodenski.

“I heard about that buzzer. I’d never heard it, but I heard it that day,” Ghiz recalled. “And I jumped off the bench and I says, man, now I believe everything I’m hearing. And you know it’s not right! This woman was just [walking] back and forth to the liquor store. And next thing you know the thing buzzes and all that stuff!”

In the end, the commissioners voted unanimously against finding the Mustang in violation.

“Your conduct is outrageous!” Ward said to Mellett, chastising him and his wife.

“She has unnecessarily and improperly turned on buzzers and noise affecting a public sidewalk, which anyone has a right to be on at any time of the night or day, 24 hours a day in the city of Baltimore,” Ward said.

“And you have no right to put barking dogs, lights flashing and all this other business Why this bar has put up with that. . . I haven’t got the slightest idea.”