Friday’s press release about a new rules committee to update the city Liquor Board’s regulations created confusion – in particular about who would sit on the 12-member panel.

Today the committee assembled in downtown Baltimore to hold its first meeting and, ostensibly, to clear things up.

But as people introduced themselves around the table at the board’s small conference room, something odd became apparent.

Two of the people in attendance were not on the list of committee members on Friday’s press release – and they weren’t on the amended list that was handed out today at the conference room door.

Also at the table – heretofore unmentioned by the Liquor Board– was Tom Yeager, executive vice president of the Downtown Partnership. “I’m just trying to clarify who everybody is,” Corbin said during the “public participation” period at the end of the agenda . 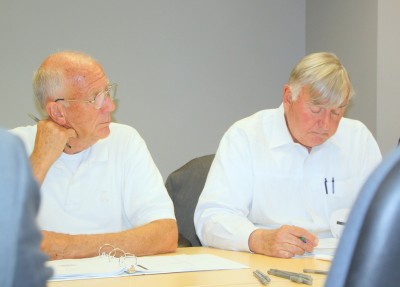 Did that mean there are actually 14 people sitting on the committee, two of whom (Goldberg and Yeager) don’t vote?

“No, they were on the email from the beginning. They were both regular [voting] members,” board executive secretary Michelle Bailey-Hedgepeth said. Pressed, she then acknowledged that the names actually were not mentioned in public press releases and apologized.

“I’m sorry I wasn’t in the office Friday. I didn’t make sure all of the names were on there. I don’t know how they got dropped off,” Bailey-Hedgepeth said. “I’m sorry, I’ve been working on a thousand things.”

So commenced the job of rewriting the agency’s rules, a task that the group (of 14 people, it seems) will be undertaking in the coming weeks, with a deadline of October 31, 2015 set by the state legislature.

It may be a wonky and dreary-sounding task, but the process of updating the agency’s rules is a high-stakes matter being closely watched by licensees and community groups alike. (The rule-making is being undertaken by the new Liquor Board, appointed by Gov. Larry Hogan, that is already coming under fire for re-opening a bar closed by the previous board and creating a rules group heavily weighted to liquor interests.)

While some of the process involves weeding out old terminology in the current rules (there’s are reference to “Mickey Finns”) and adding new ones (suddenly we’ve got “growlers”), much of it involves spelling out fair rules and procedures for all.

“There’s a lack of clear standards for licenses,” said deputy executive secretary Thomas R. Akras, addressing the seven members of the panel who showed up today. 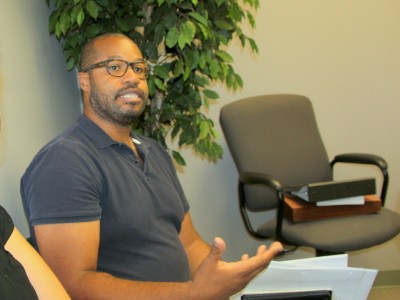 Chris Redwood, of the Hollins Market neighborhood, at the first Liquor Board rules committee meeting. (Photo by Fern Shen)

Major corrections and additions to the rules are needed, according to watchdog lawyer Rebecca Lundberg Witt of the Community Law Center.

A critic of new Liquor Board chairman Benjamin A. Neil and a two-year community advocate on behalf of liquor reform, Witt asked to be on the rules committee, but was not selected.

“Mostly, the application process needs to be much better defined – what does a complete application include? Applications are still coming in incomplete, which makes it really difficult for the community to figure out what’s going on,” she said earlier this week.

“Sometimes the board issues an approval ‘subject to the checklist’ of documents that are required, but shouldn’t those documents already be in the file?” she said.  “The process is extremely messy, and so are the files.”

[Read Witt’s full comment to us on this here.]

At today’s meeting, Witt and Corbin (who also asked to be on the rules committee) sat with one other member of the public, Chris Redwood, who lives near Hollins Market in Southwest Baltimore.

Witt’s snub by Chairman Neil was not mentioned directly.

“We’ll be submitting a lot of comments so you can look forward to those,” Witt said, when her turn came to speak.

“The only thing we would ask you is you submit comments timely,” Fine told her.

Corbin asked if the “one or two public meetings” that Bailey-Hedgepeth plans in October to get public comments on the group’s final draft could be held in the evening when working people could be there.

Redwood recommended a bigger room and suggested a live webcast.

Outside after the meeting, Redwood said he came to the meeting out of concern about the board’s ability to control nuisance bars in his neighborhood.

“You look at the establishments in our area and a lot are the kind of taverns where you have to be buzzed in to get inside,” he said.

“They’ll operate with 50 people standing around outside of the bar, and they’re letting them do whatever they want – all kinds of behavior. They do it because it’s cheap, and they can get away with it.”

Several procedural and membership matters were discussed, with some of them being resolved, some remaining murky.

• How, Fine asked his group, should decisions be made? By a vote? A simple majority? Would a quorum be required? (Nothing was decided.)

• “Should the group really be called the Rules and Regulations Steering Committee?” asked Greektown Community Development Corporation executive director Theo Harris. (This was on the printed agenda.)

“In my business that’s a term that’s frowned upon,” quipped Harris, a real estate broker who appeared today in place of John Gavrilis, whose name had been on the Friday press release. (Group consensus seemed to be to steer away from “steering.”)

• Speaking of Harris, the realtor’s remark about someone who would be coming in his place to represent him at a future meeting prompted this question from The Brew: “May members just send whoever they want to in their place?” This is how Bailey-Hedgepeth, later via email, answered: “I will be in contact with members regarding their availability and attendance.”

• Also being worked out, according to Bailey-Hedgepeth: Whether Will Bauer, who also calls himself Lou Catelli, will be a member of the panel.

Bauer, a non-lawyer who consults with licensees to help them through the liquor license process, was listed Friday and again today as a “community” member, representing the Hampden Community Council.

But the HCC has not approved him to represent them on the board’s rules committee. Asked if Bauer was still on the panel, Bailey-Hedgepeth said, “I am researching the issue.”

• What about David Kim, the head of KAGRO (Korean-American Grocers and Licensed Beverage Association) who was listed as a community member?

Bailey-Hedgepeth said he is “a placeholder” and that a KAGRO member who has a city liquor license will be named in his place.