The Liquor Board had all they needed to justify – to require, really – a “no” vote on the liquor license transfer request from Lil’s Place.

First of all, the 1909 North Pulaski Street bar’s license was “a zombie,” a term reformers have coined for licenses that are dead by law but arbitrarily allowed by the city to live on.

“This license is expired under Article 2B section 10-504 (d) for over one year,” watchdog-blogger Rebecca Lundberg Witt wrote in her Booze News post about the Oct. 8 meeting.

(Witt is an attorney with the Community Law Center which has been working to persuade the board to extinguish these expired licenses since state lawmakers red-flagged them in a scathing 2013 audit.)

But perhaps a more compelling reason to vote against the request was the strong opposition to the bar from leaders of the West Baltimore community where it is located – Mondawmin, which is still struggling to recover from the events of April 27 and the decades of disinvestment that came before.

“We want to increase home ownership, not dispel it. And with a bar, there’s no way someone’s going to come in and and build a new renovated house,” said Adeline Hutchinson, president of the Robert W. Coleman Community Organization.

She said 41 members of her group signed a petition against the Lil’s transfer.

Our Neighborhood is Dying

The Liquor Board’s files tell the story of Lil’s Place’s difficulties, as do multiple posts on the Booze News blog. But Hutchinson recounted her version of them for the commissioners that day.

The bar, she said, had been mostly closed for years, even before a March 8, 2014 fire. Lately, the community has had high hopes that post-uprising funding and attention might bring needed changes to their blighted area, she said. 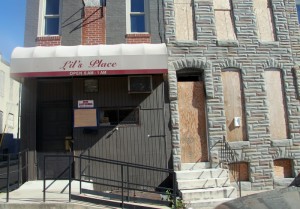 Blue Water Baltimore and the city Planning Department, she noted, are working with the community on a streetscape project, discussing what will take the place of more than 20 houses on Herbert Street that are scheduled for demolition.

There’s a grant from the Parks & People Foundation to develop green space, a partnerships with the Neighborhood Design Center and Enterprise Homes “to do something with these vacant houses.”

“But I wouldn’t want to buy a house if I knew there was a bar around the corner,” she said.

Along with hampering revitalization efforts, she argued, the establishment would have a negative effect on neighborhood health.

“Our population is dying as it is,” she said. “We do not need alcohol to be an influence on that.”

Another potential consideration for board members – the bar is in a neighborhood zoned residential – grandfathered in but no longer valid under the city zoning code.

A Green Light from the Board

The community might have had support from City Councilman Nick Mosby- but Chairman Benjamin Neil wouldn’t allow it.

A representative from the 7th District Councilman’s office appeared at the meeting with a letter from Mosby, but Neil said the board doesn’t take letters from council members on the day of the hearing.

Kodenski hadn’t had an opportunity to review the letter, Neil said, citing the 6th Amendment to the U.S. Constitution guarantee of the right to cross-examine one’s accuser.

In the end, the commissioners approved the transfer request unanimously.

What was their rationale?

“It’s up to the community”

The bar’s attorney, Melvin J. Kodenski, had said that Dale Watkins, the longtime owner’s daughter, had been granted a transfer by the board in December but couldn’t finish the process of applying for it.

According to Witt’s account of the meeting, Kodenski said there was a “reason why [Ms. Watkins] couldn’t become a licensee” but he never explained it.

In March, Watkins amended the application to name her husband, Claude Shell, as the intended transferee, Kodenski said. Testifying before the commissioners, Shell said he invested $15,000 into the property.

(Witt noted a current “vacant building” notice attached to the property and said she found no permits on file for any work that allegedly had been done there – “either the work has not been done, or it was done without permits.”)

Watkins testified that she has opened the bar off and on for short periods. (Witt, who has followed the case for years, says there is “lots of evidence to contradict this.)

Witt details the two sides’ lengthy back-and-forth in her post, and sums up the commissioners’ explanation of their vote this way:

“Commissioner Trotter stated that he understood the community’s concern, but Ms. Watkins had been granted permission for a transfer and she and her partner invested money in it, in good faith, and there was no reason why the Board should deny the transfer.”

“Trotter added that it’s up to the community to make sure that the licensees live up to their standards.”