Long regarded as dysfunctional and corruption-prone, stung by multiple harsh state audits, the Baltimore Liquor Board has been doing something this year which in theory could help them clean up their act.

A panel formed by Liquor Board Chairman Benjamin A. Neil has been re-writing the agency’s out-of-date rules and regulations at nine working meetings over the past three months.

But at least in the eyes of the community advocate who has been sitting on the sidelines watching the liquor industry-dominated group meet weekly in a downtown conference room, they have made few meaningful improvements – and, in some cases, loosened the rules.

“Over and over again, the committee set the bar at the status quo,” said Witt, who sought unsuccessfully to be a member of the Advisory Rules Committee.

“The bottom line is that liquor licensees and their attorneys wrote these regulations.” 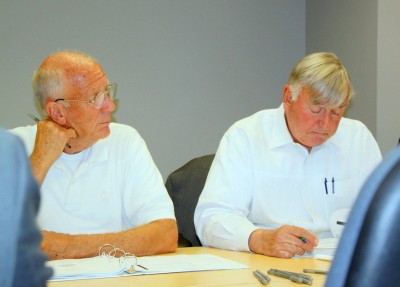 Steven Johnson and Mel Kodenski at a meeting of the Liquor Board’s rules rewrite committee. (Photo by Fern Shen)

Community leaders, meanwhile, complain that the Liquor Board failed to publicize the fact that the draft rules have been completed and that a public hearing on them is set for tomorrow (Thursday) at City Hall at 11 a.m. in Room 215.

While a press release went out on Monday, notice of the hearing didn’t go up until just before midnight on Monday on the Liquor Board’s online docket page.

This is the spot where community groups and other interested parties find out – typically a week or two ahead of time – about cases being heard at the Thursday hearings.

The fact that the spot was left blank for so long made Chrissy Anderson mad.

“I have a real problem with this lack of notice to the public,” said Anderson, president of the Fells Prospect Community Association.

Witt said the draft rules have been available to the public since late last month (albeit in a hard-to-find spot at the bottom of a webpage only insiders are likely to know about).

And she says a number of the proposed new rules do represent “a step in the right direction.”

But Witt’s main issue is the committee’s failure to make changes to address issues that most vex communities.

Her prime example – an instance where she says the re-write committee actually loosened the rules – is the Class BD-7 “taverns” that many community leaders say spawn public intoxication, public urination, loitering, littering, drug trafficking and crime.

These licenses, which allow liquor sales 7-days-a-week from 6 a.m. to 2 a.m., may make trouble for the neighborhoods, but they are lucrative for the licensees.

A long-standing problem has been “sham taverns” that skirt the law requiring them to have onsite consumption and be truly “tavern-like.”

There’s often a bulletproof, plexiglass barrier between the liquor sales area and the couple of dusty stools that ostensibly constitute the onsite alcoholic beverage consumption area.

In her formal comments on the draft rules, Witt said the new version of the tavern rule is essentially “a relaxed version” of the current one that specified no more plexiglass partitions after 1993.

This new rule sets a new grandfather date for plexiglass/bulletproof glass partitions: the effective date of these new rules. BLLC staff has stated during the committee meetings that they have not enforced this rule at all in the past and that many licensees have added plexiglass since 1993, the former grandfather date.

The BLLC commissioners have even approved the addition of plexiglass in the past several years, apparently unaware of the prohibition against doing so in the current rule. Many communities oppose the use of plexiglass and feel as though the addition of the glass lessens licensees’ incentives to manage properly their establishment. The idea that a BD-7 owner is in compliance if there is an on-sale area that could hypothetically be accessed is an extremely low threshold and not in keeping with the plain language definition of “tavern.”

The committee, according to Witt, also rejected proposals to strengthen the wording of the current law which defines “tavern” as “an establishment where alcoholic beverages are habitually served for on premises consumption.”

Suggested changes included “consistently” or “routinely,” but the vague “habitually” was left intact.

With Witt or a colleague attending all of the rules rewrite work sessions, they were able to document that industry members dominated every session, she said.

There were never more than nine members present, and three or four of them were liquor lawyers and two were licensees, she said, “so the industry had a built-in majority.”

But Liquor Board staff attorneys, who attended the work sessions, also seemed to share the perspective of the licensees and their lawyers, Witt observed.

“What truly disturbed me is that this was the main concern of the Liquor Board staff,” she told The Brew. “The regulators were most concerned with protecting the status quo above all else.”

She pointed to an exchange she recorded from one meeting in which Assistant City Solicitor Minda Goldberg questioned the idea of letting sham taverns with plexiglass remain when the practice was outlawed by the agency itself years ago.

“Why should somebody, because they just chose to, put a separation in there?” Goldberg said. “They never got it approved, they have no evidence whatsoever, they just did it. And you say, oh okay, it’s now 2015. And we had in our own rules back in 1998 that you couldn’t do this. But you kinda got away with it.”

“But I guess if somebody had a candy shop and they put up different walls and nobody came in and did it, I think that’s what happens in a lot of places in Baltimore. I don’t think it’s just the Liquor Board. I don’t think we’re unique in that. But if somebody made an alteration to a different business and the regulatory agency wasn’t, didn’t – you know, whether they noticed it or not, over the years it becomes the use.”

The Planning Department’s Laurie Feinberg interjected at this point, “The Zoning Board doesn’t operate that way.” But nobody seemed to pay attention to Feinberg as Bailey-Hedgepeth continued, “That’s what we’ve always had and my thing is, we have licensees that have that.”
______________________________

• The Board is currently taking public comment on the Committee’s draft recommendations for both the Rules and Regulations governing Alcoholic Beverages and Adult Entertainment. (Both can be found here. They’re toward the bottom of the list of links.)

• At the scheduled public hearing on November 19, 2015 at 11 a.m., the committee will make a presentation on some of the changes to the Rules and Regulations. The public will also be allowed to comment on the rules at this meeting.

• The Board will make all final determinations as to the Rules and Regulations governing Alcoholic Beverages and Adult Entertainment and they will formally adopt the rules and regulations at their December 17, 2015 meeting.

• On January 1, 2016, the Board will promulgate the both the Alcoholic Beverages and Adult Entertainment Rules and Regulations. These final documents will be posted on-line and made available in hard copy format to licensees and the public. The documents will be available in both Korean and Spanish after final adoption and translation.

• Interested parties can seek more information by contacting the office at (410) 396-4377 and comments can be sent by email to Thomas Akras, Deputy Executive Secretary (Thomas.Akras@baltimorecity.gov).