After complaints about their failure to give enough advance warning about a hearing on proposed new rules and regulations, Baltimore Liquor Board officials were on the defensive about it.

“As you can see there are not a lot of people here,” Clarke said, gesturing to the audience of about a dozen people, half of whom seemed to be liquor inspectors and liquor lawyers.

A new hearing in City Hall Room 216 on December 3 at 4 p.m. has been scheduled, Liquor Board executive secretary Michelle Bailey-Hedgepeth announced. “It was posted on the website today, I checked it myself,” Bailey-Hedgepeth told Clarke.

Bailey-Hedgepeth told Fells Prospect Community Association president Chrissy Anderson, via email, that a technical glitch resulted in the hearing not being posted to the board’s website.

She told Anderson that “the agency did not realize that this docket was not up until I saw a recent Tweet (11/16/15) because this process is normally seamless.”

Anderson was not satisfied with her response.

“Does anyone in the office have an internet connection? It is as simple as checking to verify that the information was posted by the date required,” Anderson replied in an email.

Confusing to the Public

Community Law Center’s Rebecca Lundberg Witt submitted extensive written comments on the regulations that a committee has proposed as the new rule-book for the city agency that is charged with issuing liquor licenses and monitoring licensees.

Noting that the proposed changes represent “a significant improvement,” Witt said the overarching problem with the documents produced by the group is “a failure to show its work.”

“I don’t see the steps being taken,” she said. “Either you’re considering the facts under Article 2-B (the state law governing liquor licenses) or you’re not. We have no way of knowing unless you tell us.”

She reiterated her criticism of the changes on the rules regarding BD7 tavern licenses.

“You’ve set the bar at what licensees are currently doing,” she said. “As the regulatory agency, you have the ability to expect more.”

She said that tavern in the proposed rules “has been redefined to basically not mean what the plain language means. . . a place where people can go to drink. It’s confusing for the public.”

Other language was missing as well, she said, including some of the criteria for issuing a license and hardship extension language.

The current draft, she said, “doesn’t require public notice when a licensee is being added or removed at renewal time.” That provision should be changed she said. “Otherwise licensees pop on and off with no notice to the community.”

Councilwoman Clarke and others at the meeting expressed surprise and strong concern about an additional document the rules rewrite committee produced – proposed state law changes to push for in Annapolis this year. 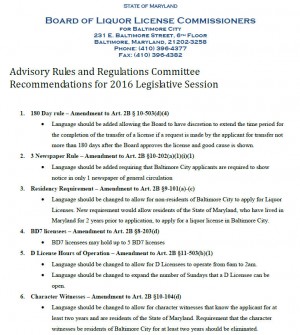 The only community representative to speak, Mark Parker of Highlandtown, asked whether these recommendations, published on the rules group’s webpage alongside the draft rule changes, would be something the public could address at the December 3 hearing.

In the interests of time, probably not, Bailey-Hedgepeth told him.

She called the rules committee and its website simply “a parking place” for that discussion.

Assistant City Solicitor Minda Goldberg, a member of the rules rewrite panel, jumped up and walked to the microphone.

“These are not recommendations. These are just ideas certain members had,” Goldberg said. “There was no voting on them.”

Former chairman-turned-licensee-lawyer Fogleman quickly rose to push back on the matter and defend the Board.

“Never before have these been publicly discussed,” he said. “I don’t think there is any legal requirement for any legislative package to be publicly reviewed.”

It was easy to see why the proposals were contentious. One of them would allow holders of the “D” License (for six-day-a-week taverns) to stay open from 6 a.m. to 2 a.m.

Other proposed law changes would relax Baltimore City residency requirements, instead permitting non-city residents to apply for licenses and to serve as character witnesses for licensees.

The document proposes eliminating the requirement that character witnesses be city residents for at least two years.

The rules panel’s own chairman, attorney Stanley Fine, got hung up on this issue with a high-profile client two years ago – the Horseshoe Casino.

As discovered by the Community Law Center and reported by The Brew, the casino’s license (approved by the Liquor Board under Fogleman) was invalid because of the people who had signed on as character witnesses.

The witnesses were Fine himself, his law office colleague, Caroline Hecker, and a paralegal at their office.

The law requires a licensee’s application to include signatures from three Baltimore City property owners who have known the applicant for at least two years.

Fine and Hecker acknowledged that they had only known the applicant, Horseshoe General Manager Chad Barnhill, previously of Louisiana, for four months.

The paralegal indicated that she had just met Barnhill.