For the most part, Liquor Board Chairman Benjamin A. Neil listened quietly yesterday as witnesses from across Baltimore – from neighborhoods rich and poor, black and white – criticized and frequently blasted the three member panel and agency staffers at a hearing on proposed new rules.

But Neil erupted when Shannon Dawkins Wrenn, president of the Hampden Community Council, pressed him to explain the board’s position on MOU’s (Memorandums of Understanding.)

For years, communities in Baltimore have negotiated these agreements with neighborhood bars and liquor stores, settling on rules the licensee would live by to ensure that the establishments don’t cause a problem with noise, litter or over-served patrons.

But a couple of months ago, Neil had cause a sensation when he told a member of the Highlandtown Community Association during a hearing that the board was powerless to enforce the MOU the group had signed with a local tavern – or for that matter any group’s MOU with any liquor establishment.

“We don’t have the authority to to enforce an MOU – you know that, don’t you?” Neil had said at the September 17 meeting, which is recorded on video.

Wrenn quoted Neil’s September 17 statement in a just published op-ed in which she also said that his announced reversal of the long-established practice “undermines” negotiations between community associations and business owners.

Yesterday, standing before the commissioners and agency staff and about two dozen people in the audience, Wrenn said she was concerned to find no mention of MOUs in the draft rules and asked for clarification.

Neil, pulling out a copy of the op-ed which he had underlined, said that Wrenn was misquoting him. “I don’t know where you got your information from. . . That’s what we do. So your editorial was patently incorrect.”

“Sir, if you go to hour 1, minute 11, I have not misquoted you at all, and you said you do not enforce MOUs,” Wrenn said. 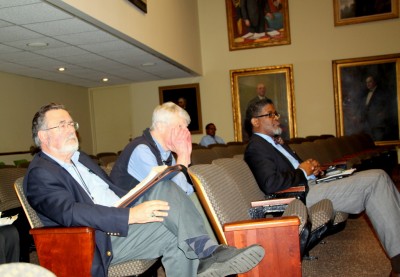 “We do not enforce MOUs that are issued by the community on their own with licensees unless the licensee consents on the record, which they do, and then we enforce them.”

“That’s great clarification, Ben,” Wrenn shot back, “because I don’t think that was clear previously.”

The first contingent to address the board was from Park Heights.

George Mitchell, of Communities United, said the concentration of liquor establishments there is hurting an already struggling community.

“We got close to 40. On some blocks we got three on one block,” Mitchell said, noting that the stores are a magnet for substance abuse and violence, recounting recent homicides in his neighborhood.

“I beg you and I say to you, if these liquor stores are out of compliance, I don’t care if it’s one light bulb out, we need to close ’em down,” Mitchell said. “Cause these kids do not need to be near 38 liquor stores in one area.”

The rules’ failure to crack down on faux taverns – “they continue to be approved!” – is hurting the massive redevelopment underway in his community, said Park Heights Renaissance executive director Cheo Hurley. 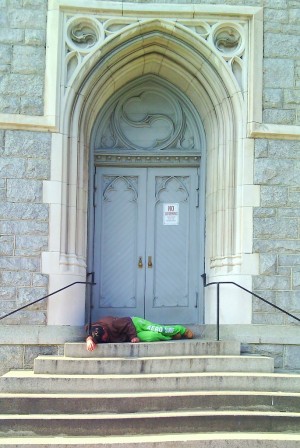 He and Ronald Anthony Mills, also of Park Heights Renaissance, were among many yesterday who said that the board’s new rules should sharpen, not weaken, the definition of BD7 license “taverns,” which are supposed to be for onsite consumption of alcohol.

“Most don’t have space [for consumption]. They don’t have stools or chairs,” Mills said. “That’s if you can get beyond the plexiglass.”

Eliminating the square footage requirement for taverns, Hurley said, is a mistake.

“They’re not taverns, they’re liquor stores. We all know what they are,” said Victor Corbin, president of the Fells Point West Neighborhood Alliance. “We all know they are using the BD7 license so they can stay open until 2 am.”

The heavy concentration of places where people can buy cheap liquor during all but four hours of the day is “killing” his neighborhood, Corbin said.

“What we’re seeing in Fells Point, especially in the upper part of Fells Point, the Broadway corridor, is the BD7s are morphing into liquor stores,” he said. “And the consequences are public intoxication, people all over the place, drunkenness from 6 in the morning til 2 a.m., people in front of churches, drunk.”

Speakers offered specific critiques of the draft rules, pointing to changes they don’t like or to the absence of changes they see as needed to prevent longtime community betes-noir, like so-called “zombie” licenses and out-of-town owners hiding behind shell licensees.

“We would like to see a list of factors that the liquor board must consider in determining whether to approve an application. It would be very nice to clarify the procedure for extension of time to keep unused license unexpired,” said Stan Wilson, secretary of the Homeland Association, representing 950 homes.

“And if licensees can request reconsideration of the board’s decisions, the community associations should as well,” Wilson said.

Mark Parker, of Highlandtown, said specific criteria should be spelled out for how hardship extensions are granted.

“We need to  know exactly might qualify as a hardship extension or is the licensee just blowing smoke up your behind,” Parker said. Rules are needed, he said, “or else it’s just ‘make a case and see how compassionate you’re feeling that day.’ ”

Echoing him, Corbin said he knows of one establishment whose hardship extensions are over 900 days old.

The board under Neil, appointed by Gov. Larry Hogan earlier this year, is causing widespread concern in his area, said William Miller president of the Northern Police district Community Council, which represents 60 neighborhood associations, six business districts and three colleges. 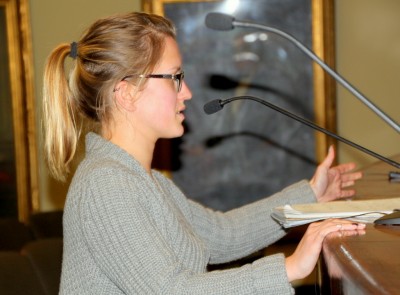 Chrissy Anderson addressing the Liquor Board. (Photo by Fern Shen)

Miller, Wilson, Corbin, community leaders from Remington and Federal Hill and nearly all the speakers said they support the detailed critique of the rules submitted by Witt, with several saying that Witt should have been included on the rules rewrite committee that Neil convened.

(PDFs of Witt’s FULL COMMENTS, along with those of others, are posted by the Liquor Board here, along with draft rules themselves and other documents.)

Chrissy Anderson, president of the Fells Prospect Community Association, elaborated on those points, noting that no one on the panel was from the neighborhoods with the highest concentration of liquor establishments, like Fells Point and Park Heights.

“It was almost all comprised of people with a financial interest in liquor licensees,” Anderson said.

The liquor lawyers in the back of the room did not testify.

At the conclusion of the hearing, Neil said final adoption will be on December 17, so there is still time for people to submit comments, but he noted “there is an executive session next week.”

“The last time the rules were changed was in in 1998. We’re doing the very best we can,” Neil said. “I know some of you don’t believe that, but we are.”

Neil noted that the liquor board will be holding a number of meetings in the community next year.

“The press release will be going out soon,” he said. 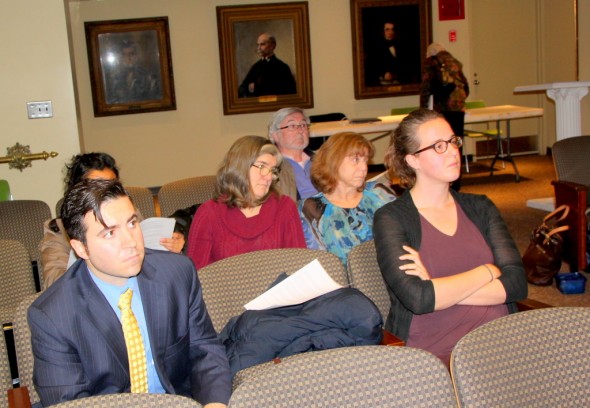