That is how the Rev. Frank M. Reid III of Bethel AME Church defended his controversial decision to tear down Freedom House, a meeting place for local and national civil rights leaders and former home of the first African-American elected to Baltimore’s City Council.

Accusing his critics of being “political” and part of an attack on inner-city churches, Reid stood yesterday before the members of Baltimore’s Commission for Historical and Architectural Preservation (CHAP) at their regular meeting and scolded them.

“We’ve been accused of poor stewardship, on the record. . . And I’ve been accused of not having a positive civil rights record,” he said, likening criticism of the demolition to “what happened to the great churches of Europe. . .what is happening to churches in DC.”

“This is about whether Baltimore is a city where churches that serve poor people are welcome or not,” he said.

Local preservationists held a protest rally on the block after the building was gone.

Although it had reportedly been visited by prominent national figures such as Martin Luther King Jr. and Eleanor Roosevelt, Freedom House was just outside the Marble Hill historic district and unprotected by any sort of landmark designation when it was demolished.

Reid made reference to that fact in his remarks.

Reid, Bethel’s pastor for the past 27 years, had not spoken publicly about the demolition or his plans for the property until yesterday.

He had come to the meeting to testify in opposition to a plan by the commission to give “preliminary landmark” status to a vacant row house at 1232 Druid Hill Avenue, which the church also owns and wants to tear down, and which also is not protected by landmark or historic district designation.

Despite the pastor’s strong objections, the commission voted 8-0 to place 1232 Druid Hill Avenue on its preliminary landmark list, effective immediately.

The designation is a temporary, emergency listing that means that the church cannot tear down the building or change the exterior in any way for six months, without CHAP’s approval. 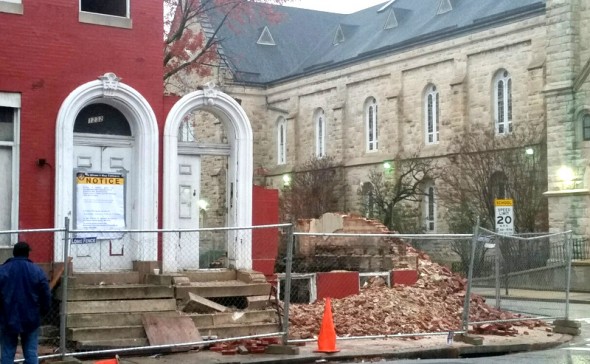 The now-demolished “Freedom House” with Bethel Church in the background. (Mark Reutter)

The commissioners said they hope the six month preliminary landmark listing will give the church and local preservationists a chance to meet and find a way to preserve the building, which might then be added to the city’s permanent landmark list.

It was the first time that CHAP  used the newly-created designation of “preliminary landmark” listing, which replaced its previous “endangered buildings” list.

Reid, who had failed to return numerous calls from The Brew, spoke on the record outside the meeting room yesterday and denied that the church tore down 1234 Druid Hill Avenue to make way for a parking lot, as some have suggested.

He said the church has not decided what to do with the land, which is just south of the main church building at 1300 Druid Hill Avenue, and that he intends to work with the community to determine that.

Reid sat through much of the meeting with his head bowed, his glasses off and his eyes closed,  waiting for the church’s Druid Hill Avenue property to come up on the commission’s agenda. Several dozen church members were also in the audience.

When commissioner chairman Tom Liebel invited Reid to address the panel, he spoke at length about why the church tore down the Freedom House and why it now wants to tear down 1232 Druid Hill Avenue.

The thrust of his argument was that old buildings such as the row houses on Druid Hill Avenue are expensive to maintain. Noting that he is a Yale-educated historian, he said the church serves a poor community and wants to use the money it has to help people in the community, not spend it all on buildings.

“My name is Frank Madison Reid III. I have a Bachelor’s degree, I have a double major in… African American studies and history from Yale University.

At the end of the day, buildings don’t make history. People do. And what is being said here today, while we focus on 1232, is that the people who we serve, who live predominantly in the community, are not here today.  The 21217 [zip] code is one of the poorest, one of the most underserved, and has one of the highest dropout rates, pregnancy rates, etc.

What is going on, if you go and look at what happened to the great churches of Europe, if you go and look at what is happening to churches in D.C., in the city of D.C., they’re being forced out of business. This is bigger than 1232. This is about whether Baltimore is a city where churches that serve poor people are welcome or not. Buildings don’t make history. People make history.

So as I wrap up my comments today, I will share with you that there is a book about the Cristero Rebellion in Mexico. There is a movie made by Andy Garcia about when Mexico decided they were going to take the property of the church, make it illegal for. . . priests to wear their garb and to speak in public. People were publicly hanged. Property was taken. And a rebellion took place. . .

Your work is great. I am a historian, and I would put my black liberation struggle-record against anybody, not only while I’ve been here in Baltimore for 27 years but for the eight years that we served in Los Angeles. But at the end of the day, the church, any church, is a movement. It is not a museum. Because when a church becomes a museum, it’s on its way to becoming a mausoleum. And when you look at the great churches of Europe that are now empty, many of them bulldozed down, that’s what you’re being asked to decide here.

And at the end of the day, as I take my seat, there is but one issue. The fact of the matter is, when we got the permit to demolish both properties, one which you say was not paid for, which you ought to go talk to housing about how that business is done, but at the end of the day, when we got it, it was outside of the historic district. Now you’re going to tell us that, in the ninth inning, you’re going to change the rules of the game? There’s something about this, there’s something about the politics of this, that does not smell right.”

Reid left the meeting before the commissioners took their vote to make 1232 Druid Hill Avenue a “preliminary landmark.”  Reached as he was getting into his car after the meeting and told about the vote, Reid said he had no comment and drove off.

City officials have said previously that they were on firm legal footing to initiate the landmark designation for 1232 when they did because the church had not yet paid for the demolition permit or picked it up, and that meant it wasn’t officially issued.

Had the church paid for the permit for 1232 and picked it up back in October along with the one for 1234, they said, they would not have been able to start the landmarking process for 1232.

Josey said the building was condemned by the city that year, meaning that it can’t be occupied until it is repaired. 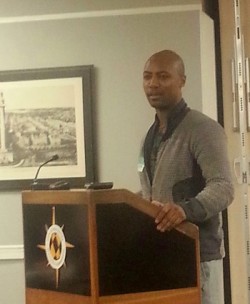 She said, as Reid stated, that the church wants to use its funds to help people rather than repair buildings and that is why it eventually applied for a demolition permit.

Reid said before he left the meeting that church leaders were hoping that the real estate market would improve since it dropped in 2008, the start of the last recession. But he said it never recovered in Marble Hill, and that was a factor in pursuing demolition.

“We Have Gotten Rid of so Much”

Preservation advocates acknowledged the case underscores the difficulty that many urban churches have in maintaining older buildings that require extensive maintenance. But they argued that the buildings along the 1200 block of Druid Hill Avenue are too significant historically to be torn down because of high maintenance costs.

“We are very hurt to have lost 1234, the Freedom House” he said. “Many of our civil rights leaders not only came there, but they met there, they organized there, they fund-raised there,” he said, adding that next-door, at 1232, “the same thing was happening.”

Cheatham, the former head of the Baltimore branch of the NAACP, said he believes “there’s no civil rights city in the state of Maryland nor the United States that has more civil rights leaders, litigation and legislation than Baltimore City.”

“But sadly enough, those who come to visit us have no idea what we have because we have gotten rid of so much,” he said. “We have retained so little. This is one of the few buildings that is still left.”

He said the demolition issue had exposed an unfortunate division between traditional allies.

Kelly Cross, president of the Old Goucher Community Association, also addressed the CHAP meeting. He said he believes Bethel AME should consider another option besides demolition.

“If the church can’t hold onto that building and preserve it, can’t provide the stewardship that’s needed, perhaps they should consider getting rid of it,” Cross said.

“Perhaps,” he added, “there are some other people, other developers, other community members who would be better stewards.”