Some big and urgent questions about Baltimore’s future were asked of mayoral candidates assembled at Station North on Wednesday.

How would you bring equity to a city still recovering from a hundred-year-old legacy of legally-mandated housing segregation?

How would you fix Baltimore’s chronically under-performing school system and make sure new spending wasn’t wasted?

What is your five-year vision for the city, candidates were asked at the Baltimore Impact Hub forum.

With 11 people on the stage and with one minute allotted per answer, rhetoric, talking points and catchphrases often seemed to prevail.

The one moment that cut through the static was not an answer, but a question posed by activist J.C. Faulk: “How will you stop police from killing black people in this city?” 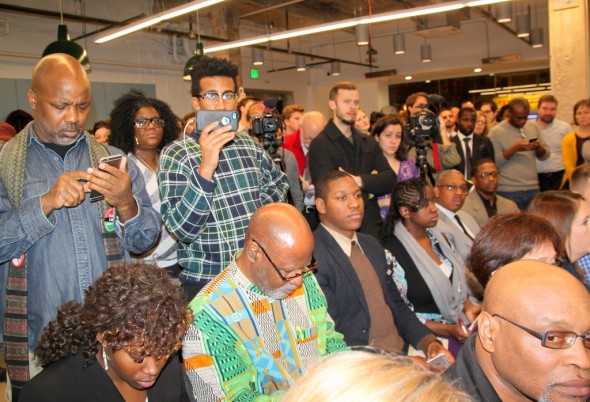 After a tough 2015, there was grassroots interest in what mayoral candidates had to say about Baltimore’s future. (Fern Shen)

(At this point the moderators switched to 30 seconds for each answer, a shift which didn’t set well with Faulk.)

“First we need to stop these gag orders, the non-disparagement agreements where someone does something to someone in the city of Baltimore [and] they are not allowed to talk about it after they get a civil lawsuit.”

He called for “more teeth in the civilian review board” and promised body cameras and dashboard cameras “for every single patrol officer” within his first 100 days in office.

He cited having more police officers who live in the city, more foot patrols, equipping officers with “body cameras, obviously” and promoting from within.

“We are not going to Oakland to get the chief of police in my administration,” he said, winding up with “we need to change the culture of the police department.”

Patrick Gutierrez likewise called for “a massive culture change,” and said officers should be given clear expectations and held accountable for wrongdoing.

But what got Gutierrez big applause was when he cited a recent example – the high-ranking police union official who was reassigned from street patrol after a coalition of city activists demanded his firing for what they said were offensive tweets posted to his personal Twitter account.

Gutierrez even recited the specific policy, “section 6.2,” that would allow the mayor to terminate the officer, Lt. Victor Gearhart.

“So it’s there,” he said. “We just need a mayor who’s going to be strong enough to stand up and use those [provisions] to get them out.”

Here’s what Elizabeth Embry had to say:

She called for body cameras (they all did), a change in the way police are recruited and trained, and in “the way we hold police accountable for their actions, for their brutality, for their misconduct.”

Josh Harris also spoke about training, having “a true community policing model” and having the community involved “from the training and recruitment of officers all the way through substantive review upon infractions.”

(At this point he confessed to losing his train of thought and told people to “talk to me afterwards.”)

From Gersham Cupid, a candidate who is a police officer, came a relatively brief answer.

“You have to convict them and you have to punish them – period,” he said. “Convict and punish officers that murder not just blacks, but any residents of our city.”

Cindy Walsh didn’t say what she would do, but dwelt on the fact that responsibility for the police ultimately rests with the mayor. “So when we yell at the police commissioner for such egregious situations we are yelling at the City Hall, at the mayor.”

Acknowledging “a lot of common sense things we’ve all said,” Calvin Young used his 30 seconds to answer Faulk’s question by addressing what he called the “root causes” of social disorder.

“How many young black men don’t have jobs and as a result have to sell drugs?” he said. “They don’t have the education to get the jobs.”

And how would the two most seasoned pols in the lineup reply to Faulk?

“I believe that you have to try and convict,” said Sen. Catherine Pugh. “Open up the trial boards so the public can participate” and have more officers who live in the city, she said.

Also on her list was cultural diversity training and psychiatric evaluations of officers.

As for Sheila Dixon, she, too, promised body cameras, noting that “our civilian review board is going to have professional staff so if a civilian wants to send a picture through a camera or email or letter or call, they can send that information.” 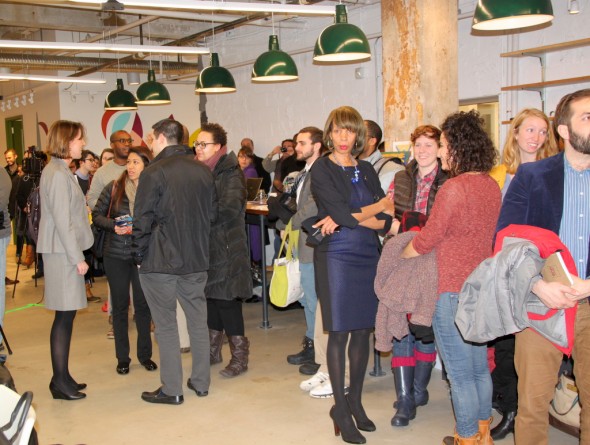 Catherine Pugh, facing the camera, and others wait the start of the forum. (Fern Shen)

Substantively, there was not much else from the former mayor aside from calling for mental health services for officers, continuing to speak well past her allotted time.

Despite the challenging format, the forum gave speakers ample opportunity, with moderators’ other questions, to show off some fresh ideas or approaches.

“How will you incorporate racial equity into the design of your policies and into the evaluation so that you know they’re working?” moderator Lawrence Lanahan asked.

(Translation: Convince us you won’t take the same tired approaches as city leaders have in the past that sound good, but accomplish little.)

Dixon said she would recruit police officers who live in the city and “increase training money” to help people “coming out of [being] incarcerated to be able to get jobs in the IT industry, etc.”

She also mentioned “enhancing the living wage for city employees to $15-an-hour” and enhancing MBE (minority-owned) and and WBE (women-owned) business enterprises.

Pugh filled her minute with an uninterrupted string of sound bites.

Baltimore needs to keep senior citizens and “our milleniums 18 to 34,” from moving out of the city, she said, winding up with this:

“We’ve got to build better schools, we’ve got to create neighborhoods where everyone can live and we’ve got to be more inclusive in our decisions and our opportunities and create the jobs for everyone that wants to work, even our young people, believe it or not many of them need to work even after school and we need to make those connections with our business communities and our young people, a city for all people, inclusive of all kinds of housing. Thank you.”

Warnock’s approach to equity? He began with requiring developers to spend money to help communities in return for the lucrative tax subsidies known as TIFs and PILOTs.

“I’ve told the biggest developer in town that in my administration, you cannot harvest the fruits of the Inner Harbor without planting seeds in East and West Baltimore,” Warnock said, adding that he would require any TIF or PILOT recipient to build and maintain a recreation center.

Harris warmed to the topic of tax breaks and givebacks, citing a recent example.

He touted his efforts as a southwest Baltimore activist to help win a “community benefits agreement” in return for the $17.5 million TIF that the city is awarding to La Cité, a New York real estate company, near the University of Maryland BioPark. 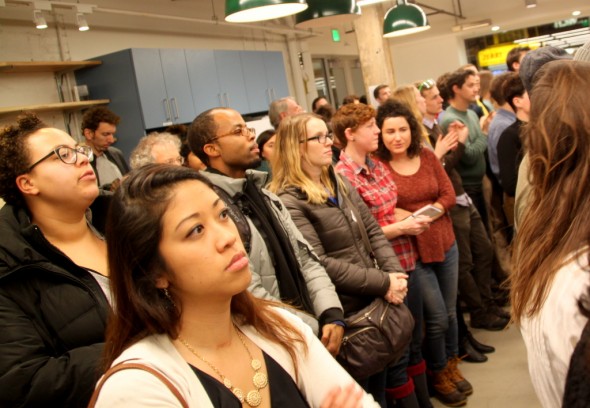 If it hadn’t been an election year, he said, “I don’t know what would have happened.”

“We need CBAs with every single TIF,” Mosby said, when his turn came. “It’s unfortunate we have not done this to date.” He talked about housing that had not increased in value in decades and pointed listeners to the 15-point plan on his website.

Stokes’ answer on the equity question was to say that, if elected, he would end the practice of granting waivers (at the weekly Board of Estimates meetings) to contractors who say they cannot meet woman and minority hiring requirements.

Embry, on equity, kept it general, speaking of the “staggering disparities” in Baltimore, including “the fact that a child born in Roland Park has a life expectancy 20 years greater than a child born in parts of West Baltimore and South Baltimore.”

“These are unbelievable disparities,” she said, “and that has to be the lens through which we view all public policy.”

Speaking of tax subsidies, Dixon was asked specifically about TIFs and PILOTS and how she would leverage them to benefit citizens across the city.

She answered without hesitation, “I’ll give you two examples.”

Rather than describe future plans, she opted to recount the tax breaks she greenlighted during her time as mayor, though she left out the more controversial ones.

(Those would be the $13.6 million PILOT for her then boyfriend-Ron Lipscomb’s Harbor East apartment project and the biggest-ever TIF for the Westport project then being developed by Patrick Turner, who famously left gift cards at City Hall which Dixon used for personal purchases.)

For the crowd of about 250 people Wednesday, Dixon talked about the Hilton Hotel negotiations: “TIFs and bonds” in return for “jobs and opportunities” and “a specialized person assigned to find jobs” for people in the community.

Similar negotiations took place around the TIF awarded for Mondawmin Mall, she said, including benefits for Frederick Douglass High School across the street.