Faced with residents demanding tougher regulation of  “BD-7” taverns that one speaker described as “holding our community hostage,” Liquor Board officials repeatedly said their hands are tied by the limitations of Maryland’s liquor laws.

Then go back to the legislature, one of the residents replied at a public forum last week, and tell them “we don’t have the teeth because you don’t give us the teeth. We can’t do the job you ask us to do.”

After which the board’s deputy executive secretary, Thomas Akras, expounded on the difficulty of drafting laws, getting them passed by the legislature and signed by the governor.

Listening to all this at the town hall meeting was frustrating to Community Law Center staff attorney Rebecca Lundberg Witt, who pointed out later in a post on her blog that the agency has all the authority it needs – it just doesn’t choose to exercise it.

“The Liquor Board is required by state law to ‘adopt regulations to determine the manner of operation’ of a BD-7 licensee. This means that, as long as their regulations don’t conflict with state law, the Liquor Board has the authority to tell BD-7s how they may operate,” Witt wrote, reacting to the explanations given at Wednesday’s night meeting in Northwest Baltimore.

Witt had just sat through the months-long process of the Liquor Board’s rules and regulations update, conducted by a committee dominated by licensees and their lawyers and chaired by one of them.

The BD-7 regulations specifically were reviewed at meetings 7, 8 and 9, she recalled.

“The agency had every opportunity to update its rules and regulations to demand more from BD-7 taverns,” Witt wrote.

“After hours of discussion, including passionate defenses of the status quo from both [Executive Secretary Michelle] Bailey-Hedgepeth and Akras, the committee voted to keep the BD-7 regulations essentially the same as they were in 1998.”

Passing on the opportunity to clarify its rules regarding BD-7  taverns, the Liquor Board has left the category to be broadly construed and in practice defined “with a different definition of ‘open and operating’ than most people have,” Witt wrote.

“Buzz You In” Rule

A BD-7 is supposed to have on-site consumption, but this often turns out to be a sham lounge with boxes piled on the “bar” and a couple of dusty stools, leaving the establishment to function primarily as a cheap liquor store, open seven days a week from 6 a.m. to 2 a.m. 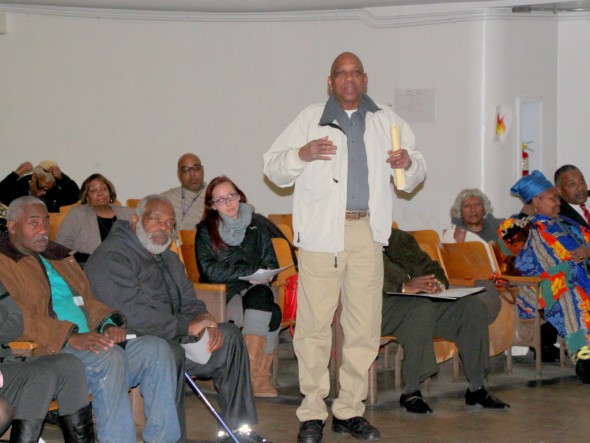 Witt illustrated her point by reviewing Wednesday’s discussion of 4 G’s Liquors at 4701 Liberty Heights Avenue, a tavern that has drawn years of complaints from residents in Howard Park.

Acting Chief Inspector John Howard said that when inspectors did investigations of the store, they were buzzed into the lounge area upon request, which, Mr. Howard says, is all that the Liquor Board can legally require.

(In practice, residents said, the lounge area is even more hostile to potential patrons. One speaker said he tried to enter on the previous Sunday, but the owner working in the liquor sales area refused to let him in.)

Inspector Howard, according to Witt, was “incorrect” when he said the Liquor Board cannot ask for more.

Through the Rules and Regulations rewrite process, the panel had ample opportunity to establish a definition that was tougher than their de facto “as long as they buzz you in” standard.

Going back to her notes from the rewrite meetings, she explained it this way:

At meeting #8, the Executive Secretary “said that the Liquor Board should be able to define what a ‘tavern’ is, and that the term tavern does not really have any meaning to it, as applied to BD-7 licenses, because the license is being used in so many different ways throughout the city.”

When a representative of the City Solicitor’s office, Minda Goldberg, suggested that, at minimum, the Liquor Board should bring its regulations in line with the Zoning Board’s description of a tavern, the committee, composed mainly of licensees and their attorneys, roundly rejected her suggestion and kept the original language, though many community members and even licensees! (see the notes from the hearing for 1041 Greenmount Avenue) have argued over the years that the regulation is confusingly vague.

In committee meeting #8, “Bailey-Hedgepeth . . . said that to change the rule to require ‘consistent and routine’ bar service would be to put some licensees out of business.”

The Liquor Board’s consistent prioritization of licensee profits over community members’ complaints about public health, safety, and welfare is central to the agency’s failure to meet the needs of Baltimore City communities.