If community leaders and other critics thought it would be easy to get the Democrat-dominated Maryland legislature to help them oust the three city liquor commissioners appointed by the Republican governor, they found out otherwise last night.

Weeks of lobbying by community associations and tough talk by city senators – followed by an hour of at times harsh questioning – all seemed to evaporate when the most powerful person in the Senate rose to speak favorably about the embattled Liquor Board.

“I think these are good people. There needs to be some education here.”

In the wake of Miller’s words, the Senate Executive Nominations Committee decided, by a unanimous voice vote, to delay confirmation of the appointees: Chairman Benjamin A. Neil and commissioners Douglas H. Trotter and Elizabeth A. Hafey, who were appointed by Gov. Larry Hogan last summer.

But after the vote, chairman Sen. Jamie B. Raskin (D-Montgomery) said the Nominations Committee is still considering the three. 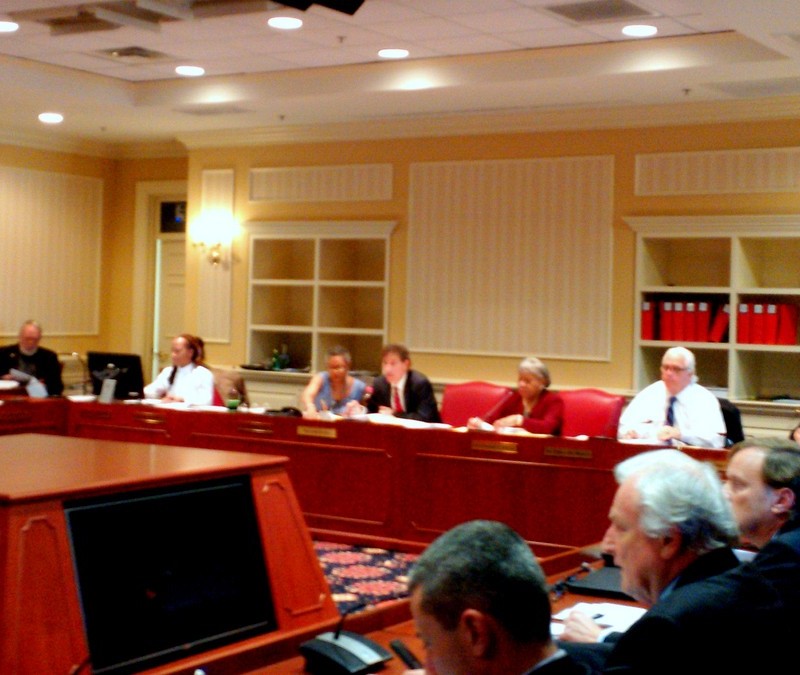 The appointees “are good people,” Senate President Thomas V. Mike Miller, right in white shirt, remarked toward the end of the hearing. (Photo by Fern Shen)

“The committee is clearly troubled by what they heard today,” Raskin said, speaking with The Brew. “They have these thick packets of documents to review. The members are going to reflect on the situation and do some further inquiry.”

“That is not acceptable to me. We cannot let them learn on the job when it comes to issues that affect peoples’ health and safety,” she said.

As Witt spoke to reporters, Chairman Raskin approached and asked if she had ever considered becoming a commissioner.

“Why don’t we try to make that happen?” he said. “It’s just so obvious that you would clean things up.”

Noting what he described as “President Miller’s sympathetic remarks,” Raskin said, “there was some sense that the commissioners arrived there without any training. They didn’t know what they were doing and so made a series of poor judgments and miscalculations.”

This prompted an objection from Witt.

“They have a deputy executive secretary [Thomas Akras who was at the hearing] who is an attorney whose full-time job is to provide them with legal advice about” the state liquor law, Witt said.

“Okay, nobody made that clear,” Raskin replied.

“Proud of the Work We’ve Done”

The idea that the  commissioners may have made some initial mistakes out of inexperience was one of Commissioner Neil’s main points in his testimony.

“I was given a call from the appointments secretary on a Wednesday and [they] said there was a confirmation tomorrow on a Thursday and your first docket’s on Thursday,” he said.

“I am actually proud of the work we’ve done,” Neil said, speaking in front of the committee and before a standing-room-only hearing room.

Commissioner Trotter said he thought it would take a year to turn around the agency. At times in his testimony, he blamed the Liquor Board staff for failing to give the commissioners required information on cases before them.

Some of the more detailed testimony centered on the board’s widely criticized Stadium Lounge decision.

That Waverly tavern, cited for having illegal video poker gambling machines as well as other violations, was shut down for six months by the previous board.

Acting without input from the other commissioners, Neil reversed the decision, ordering the establishment re-opened after only two months of suspension.

Neil said he made the decision to help Alice Pinderhughes, who represents the Liquor Board in Circuit Court, with an appeals backlog he said left her “overwhelmed.”

“I asked her, was there anything I could do to alleviate the [backlog] problem. She thought the previous board had been pretty harsh on the Stadium Lounge.” Neil said that he and Pinderhughes drew up a documents, signed it, and got a judge to sign off on it.

Asked by Raskin if he got the other commissioners to sign the document, Neil said he did not. He said he did it on his own “on the advice of legal counsel.”

Asked by another senator why he didn’t alert the community, which had been up in arms about the establishment, he responded, “That was an error in judgement on my part.”

Witt, addressing the committee, said the appointees “have repeatedly ignored the law and community concerns” and after reviewing many of the points she has made in previous written testimony, concluded that “either they don’t know what the law says or they don’t care to apply it.”

Some on the committee questioned the appointees closely, including vice chair, Sen. Delores Kelly (D-Baltimore County), who asked about the appointees’ estimate that only about half of the managerial deficiencies noted in a 2013 audit of the agency have been corrected.

“Why such a poor record of remedying?” she asked.

Then Trotter brought up the Stadium Lounge and took a different stance than Neil. When discussing the case with Neil, Trotter said, he told him that he thought a six-month suspension “would put them out of business.”

Raskin asked, “Are you saying the six-month suspension originally was contrary to the law?”

“You stand by the two-month decision?” Raskin asked.

Trotter said that he did, then went on to equate the illegal use of video poker machines at the Stadium Lounge with legal gambling at Baltimore’s Horseshoe Casino.

“If we didn’t stand by it, there’s a very prominent, let’s just say casino, in Baltimore that should be shut down,” he said, going on to dismiss other complaints from residents about the Waverly establishment.