Every year during the month of April, by law, there’s an opportunity for people in Baltimore with complaints about a bar or liquor store to make their case for why the establishment’s liquor license should not be renewed.

Most don’t, but some communities do persuade the Liquor Board to kill a license, as in the case last year of the infamous college watering hole Craig’s (also known as Favorites) on York Road. That hearing went on for about four hours.

But this year, instead of scheduling the hearings across multiple days throughout the month, there is just one day, April 21, and seven cases are scheduled. Each is allotted one hour.

“That really shows a disregard for the interests of community members,” said Becky Lundberg Witt, staff attorney at the Community Law Center who blogs about liquor issues.

Witt, who covered both the 2014 and 2015 protest process, said witness testimony and cross examination by licensees’ lawyers make many protests long, drawn-out affairs.

Community members who generally don’t have a lawyer, would get short shrift without enough time to make their presentation, she said.

“The vast majority of protest renewals in my experience take longer than one hour to do justice,” Witt wrote in a letter to the Board of Liquor License Commissioners urging the board to reconsider.

In her letter to the Board, Witt said the Board should reconsider.

“I strongly urge the Board to schedule sufficient time for these hearings, perhaps break them up into two (still very full) days,” Witt wrote.

Asked this morning why the Board scheduled all the hearings on a single day, Thomas R. Akras, Deputy Executive Secretary of the Liquor Board, said he was “busy with some things right now. Let me get back to you.”

Akras said the scheduling of the hearing was by instruction of the  commissioners. “The members of the Board believe that they have the capacity and wherewithal to conduct all seven (7) hearings on the same day,” Akras said,  reading from a letter he sent to Witt. (He quoted “the guidelines set out by Pridgeon v. Board of License Commissioners of Prince George’s County.)

Yesterday, the final day of the 2016 General Assembly session, the legislature approved a one month extension, allowing until June 1 for renewal protests to take place.

Today (4/14/16), Liquor Board office secretary Nadine Davis sent out an email saying the previously scheduled April 21, 2016 Protest of Renewal hearings have been “postponed until further notice.”

Ordinarily, a letter such as Witt’s would be addressed to the Liquor Board Chairman.

But, with none in place, indeed with effectively no liquor commissioners at all at the moment, her missive was directed to “To Whom it May Concern.”

Witt says Akras is misreading the law, and that the pertinent reference is an opinion by the Maryland Attorney General which says that the commissioners, if not confirmed by the General Assembly, are no longer in place after the end of the legislative session (That would be Sine Die, which is today.)
________________________________________

Concern over the unusual protest schedule comes as the Liquor Board remains in leadership limbo, with appointments for the three-member board currently vacant. 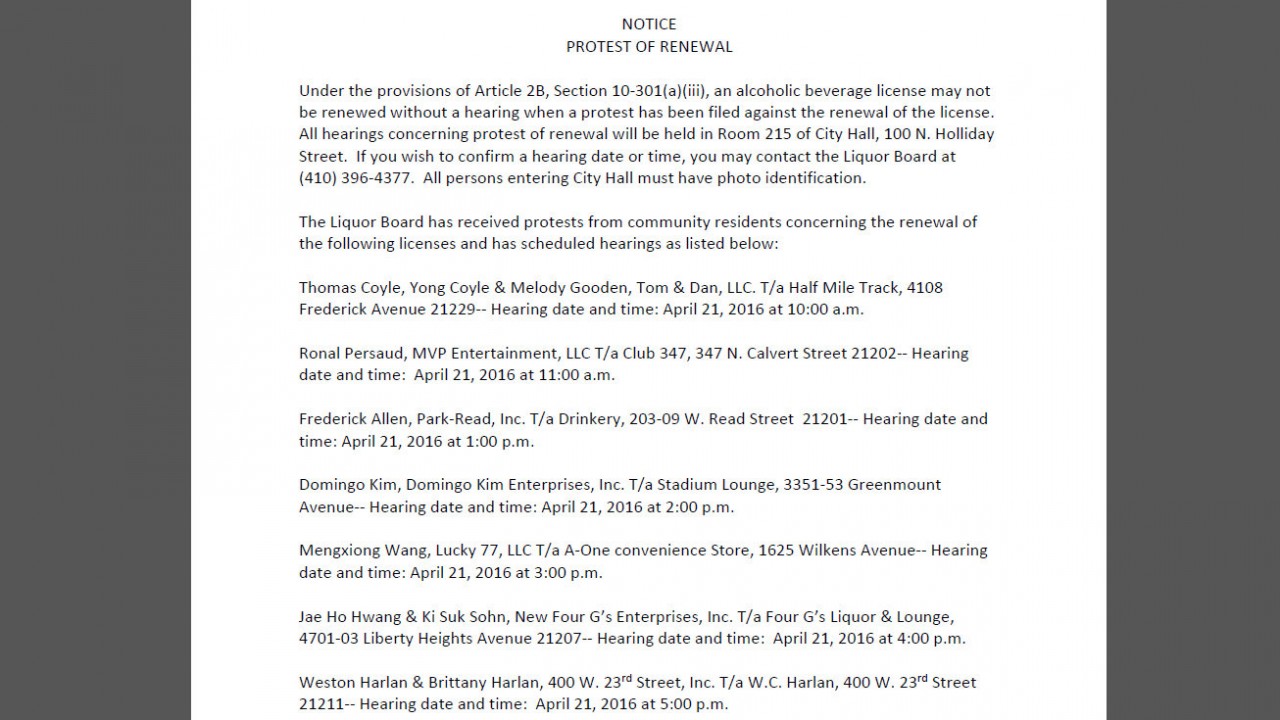 “Protest of Renewal” cases scheduled to be heard on April 21. (Baltimore Board of Liquor License Commissioners)

Amid complaints by neighborhood leaders and the Community Law Center that the Board under Chairman Benjamin A. Neil did not follow the law and was too pro-licensee, the legislature chose not to confirm Neil and his fellow commissioners, Douglas H. Trotter and Elizabeth E. Hafey.

Not only were the three appointees of Republican Gov. Larry Hogan turned out after less than a year on the job, the Democrat-controlled legislature stripped the Governor’s power to appoint the city’s liquor commissioners.

Under the measure pushed through by city lawmakers, the power to appoint liquor commissioners has been given to Mayor and the City Council.

Witt said the Community Law Center has not received any inquires from Mayor Stephanie Rawlings-Blake’s office or from City Council President Bernard C. “Jack” Young seeking advice on who should fill the vacancies.

The leadership troubles at the agency extend to staff as well as commissioners. 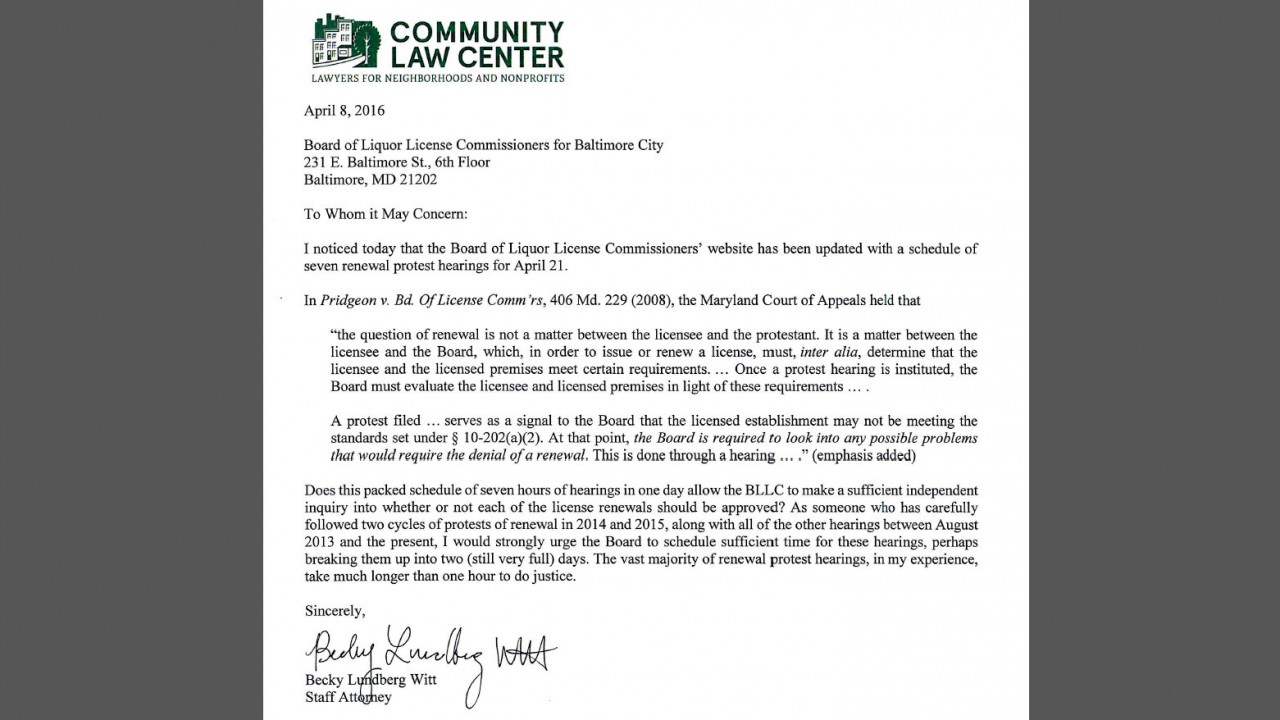 Last month, Liquor Board executive Secretary Michelle Bailey-Hedgepeth left the Liquor Board under circumstances then-Chairman Neil has declined to discuss.

Bailey-Hedgepeth has deferred comment on the matter to her lawyers.

Meanwhile also causing concern is the fact that an expected audit of the city Liquor Board, conducted by the Office of Legislative Audits, has not been released.

An audit of the agency is required by law every three years. The last one, which was released in March 2013, was blistering.

Reached last week, the Office of Legislative Audits was unable to provide any information about when the document will be released. 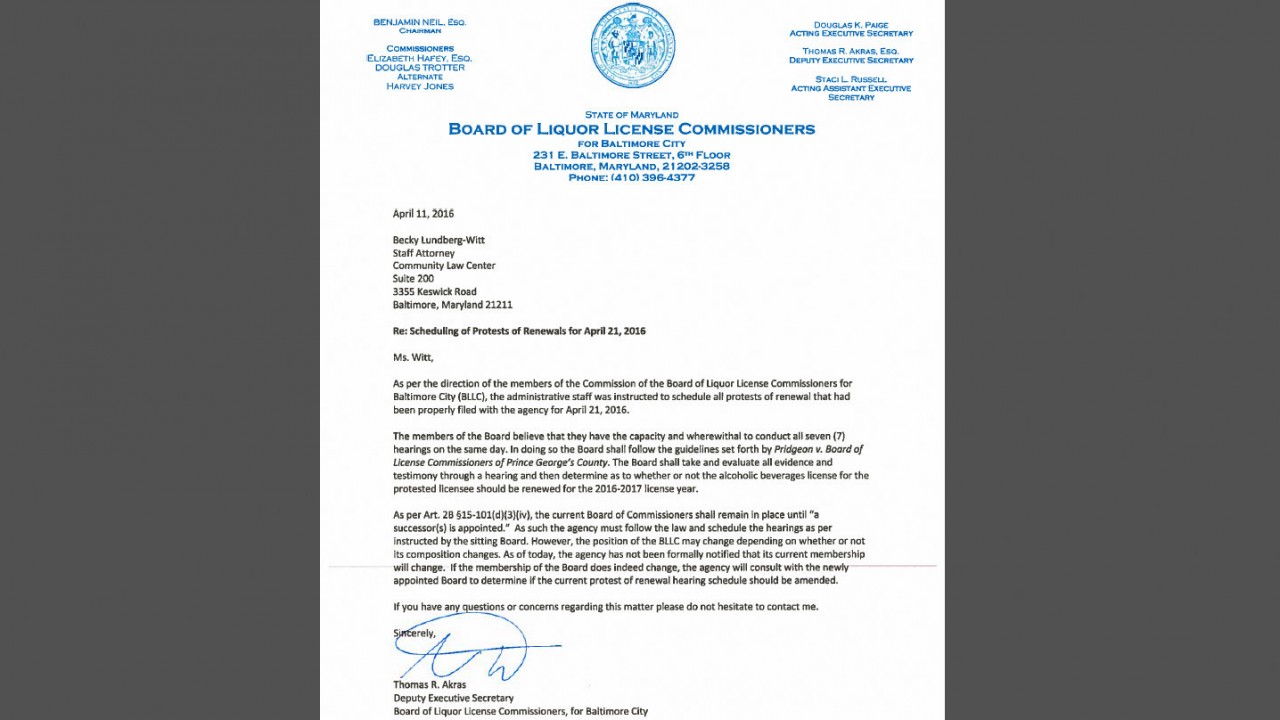 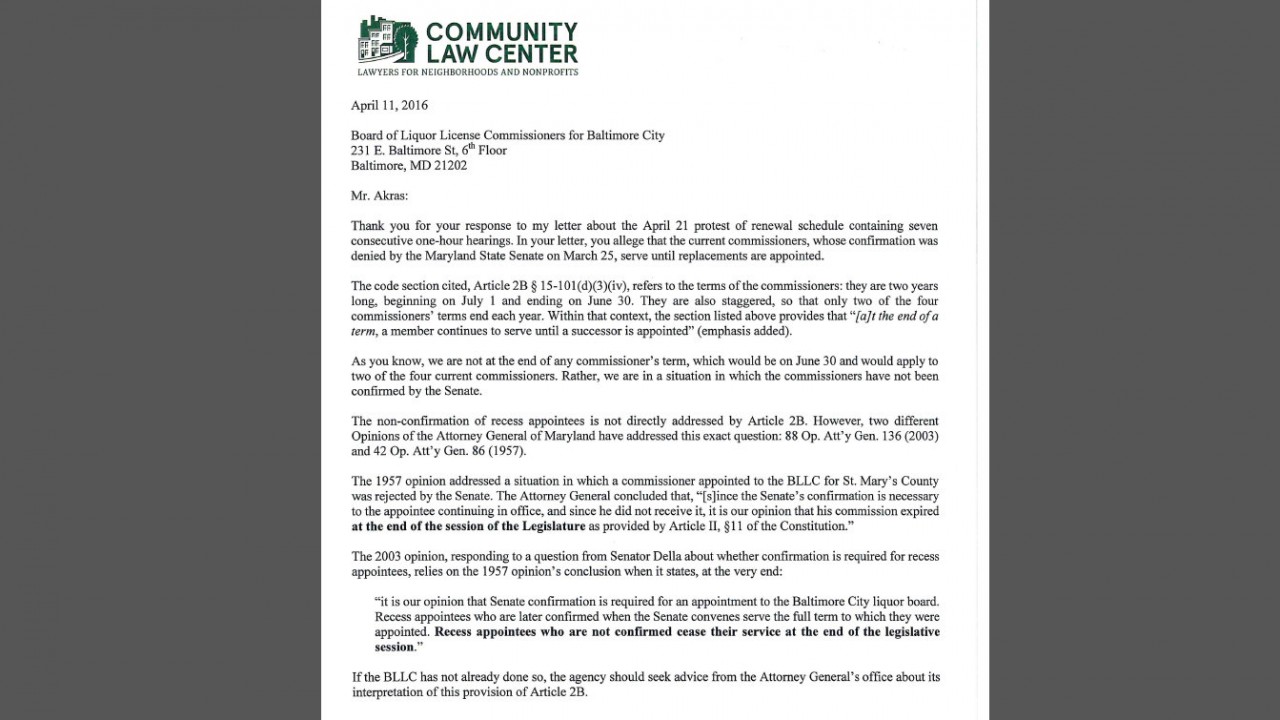 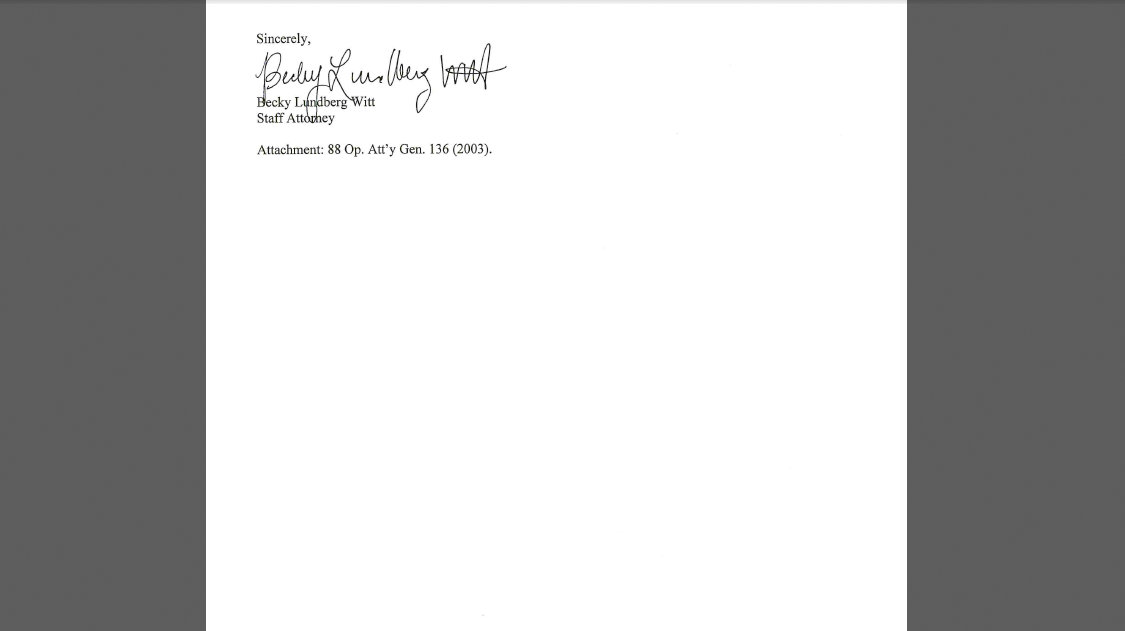