One of the three Baltimore liquor commissioners appointed by Gov. Larry Hogan – and then ousted by the legislature – has filed a suit challenging the law that gave temporary authority to city officials to appoint Liquor Board members.

In March, the Senate Executive Nominations Committee opted not to confirm Trotter and fellow Hogan appointees, Benjamin A. Neil and Elizabeth A. Hafey, amid criticism of their actions on the liquor board.

The legislature subsequently approved Senate Bill 1159, which gave the mayor and council president power, through 2018, to appoint commissioners if the legislature failed to confirm the governor’s nominees.

Trotter and Watkins contend that the measure is unconstitutional because the legislature “interfered with powers that the [Maryland] Constitution expressly confers on the Governor.”

The eight-page complaint notes that the Board of Liquor License Commissioners “has been an agency of the state of Maryland since its inception in 1934, shortly after the repeal of Prohibition” and that commissioners have always been appointed by the governor.

The complaint asks that Trotter, Neil and Hafey be restored as commissioners and that the court nullify the appointments of the new commissioners, Albert J. Matricciani, Jr., Dana Petersen Moore and Aaron J. Greenfield, who are also named in the suit.

The lawsuit is the latest twist in a battle over city liquor regulation that has pitted liquor interests against community leaders and the Democrat-controlled legislature against a Republican governor.

The melodrama, played out late in the legislative session, led to some transition problems as the new liquor board had to extend the deadline for license renewal protests.

The suit filed yesterday, which alleges that Matricciani, Moore and Greenfield “have no legal authority or force,” comes after the three already held their first hearing, making a ruling in one case to extinguish the license of a Mt. Vernon bar, The Drinkery.

As of today, the the agency’s online schedule still included a June 9 hearing to hear more renewal protests. Liquor Board Executive Secretary Thomas Akras said he could not comment on the effect of the litigation on the board and agency.

Howard J. Schulman, who filed the suit on behalf of Trotter and Watkins, called the current commissioners “in effect, squatters,” and said he plans early next week to request a Temporary Restraining Order preventing them from acting in any official capacity.

One feature of the suit is the novel claim that because the appointment of Trotter, Hafey and Neil occurred when the Senate was not in session, it “thus was not subject to [Senate] confirmation in accordance with state law.”

It also charges that the city’s senators “exerted a heavy influence” on the appointments of liquor commissioners and employees. In a footnote, it singles out Sen. Joan Carter Conway citing news coverage describing her husband, a former liquor board inspector, as “a phantom employee.”

The suit also argues that a system of city-appointed commissioners will hurt property values and Baltimore’s tax base.

Because it “eliminates gubernatorial oversight” of the commissioners, it will make the board “less efficient in carrying out its functions and responsibilities and more costly to operate,” the complaint says, noting that the plaintiffs, Trotter and Watkins, are city residents who pay property taxes. 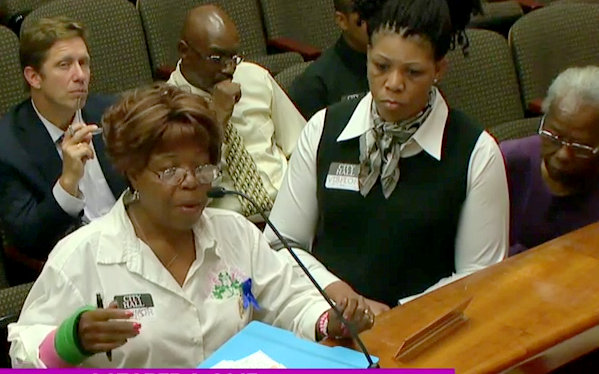 The daughter of the owner of Lil’s Place at 1909 North Pulaski Street, Watkins tried unsuccessfully last year to have the establishment’s liquor license transferred to her name. She then amended the application to have it transferred to her boyfriend, Claude Shell.

At an an October 8 hearing on the transfer request, neighbors complained about the bar, saying it would hurt efforts to uplift their Mondawmin-area community.

Adeline Hutchinson, president of the Robert W. Coleman Community Organization, testified that Watkins had used the n-word at a community meeting and presented a petition signed by 41 people in opposition to the transfer and reopening of the bar.

Trotter, Hafey and Neil voted unanimously to approve the transfer. The bar’s plans were thwarted by the city Zoning Board, which denied its request to open a bar at that location.