Allowing people who can’t deliver testimony in person to submit it in writing is a long-established practice of boards and commissions in Baltimore and beyond – from the local City Council to the U.S. Congress.

But it won’t be permitted at the Baltimore Liquor Board.

Under an “administrative order” issued last week by Liquor Board chairman Albert J. Matricciani, Jr. – that has raised the hackles of community leaders and their advocates – only testimony delivered with a visit to City Hall will be considered.

This is how “Administrative Order #7, ” announced by a late Friday afternoon press release just before the July 4 holiday weekend, reads in full:

“Any individual who wishes to present testimony as part of the evidentiary record for consideration by the Board in its decision concerning a matter in which a public hearing is held, shall be present at the public hearing so that his or her testimony will be presented in person, under oath, and on the record. This regulation is effective as of July 1, 2016.”

Would requiring interested parties to attend the Board’s daytime City Hall hearings – regardless of job or family obligations, physical disabilities or transportation issues – be unfair?

“They’re going to have to find some representative to give that testimony on their behalf,” Matricciani said, in a phone conversation with The Brew.

The chairman, appointed to lead the troubled Board in April, said the reason for the administrative order was that some people have been excessively burdening the agency with questions that were inappropriate outside of the weekly hearings.

“I understand in the past there’s been some experiences where people have been contacting the commissioners and staff about cases that are ongoing before the board,” Matricciani said.

“I don’t want there to be an Open Meetings law issue. There shouldn’t be all these subterranean conversations,” Matricciani said. “I’m told this was becoming a problem and I wanted to stop it before it got out of hand.”

Asked if the policy applies to licensees and their lawyers, Matricciani paused and said “the licensee has the right to contact the Board about scheduling and certain issues but generally, yes.”

Chrissy Anderson said she thinks she knows the reason for the new policy:

Her barrage of emails about a liquor license that appears to be expired, directed at Liquor Board deputy executive secretary Thomas Akras, who sent out the Friday memo.

“I 100% believe it It was a direct result of my questioning the agency about the Arcos license, and the agency’s role, or lack of, in this case, becoming part of a court settlement when the license had been dead for quite awhile,” said Anderson, president of the Fells Prospect Community Association. 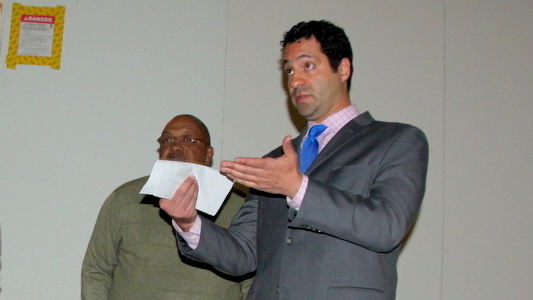 Asked about it, Matricianni said he didn’t know what particular case had raised staff concerns.

“Most people cannot afford to take time off of work or get child care to attend a hearing in the middle of the day on a Thursday,” Witt said.”How can we really expect all testimony to be in-person? It doesn’t seem fair.”

Sen. Bill Ferguson, in a letter to the Board sent out today, pressed Matricciani sharply about it.

“Many constituents have contacted my office with great concern as to both the substance of this order and the process by which the Board has issued the order,” he wrote.

One of Ferguson’s questions was whether the new policy might lead to perjury charges, a query stemming from the recent subpoenas sent to community members that sparked allegations that it was meant to intimidate.

“Given the Board’s clear concerns for the authenticity of written communications, will the Board be pursuing perjury cases against individuals who provide willfully inaccurate information to the Board?” the 46th District senator wrote.

Ferguson made a number of objections, including the fact that the Liquor Board’s Administrative Order #5 issued last year “expressly permitted license holders not to appear before the board for matters involving a license transfer.”

• Does the Board plan to begin holding extended hearings during evening hours for people with full time careers that take issue with matters requiring a hearing before the Board?

• How will Order #7 apply to written letters of support or opposition from community members/associations or from licensees on matters before the Board?

• How will Order #7 apply to petitions in support or in opposition to a matter before the Board? Will all signatories to a petition now be required to attend Board hearings in person?

• How will Order #7 apply to matters that do not require a hearing before the Board or matters that are handled without being placed on the docket?

Witt questioned the need for the chairman’s order, noting that agency staff is already able to instruct anyone trying to improperly contact the commissioners to use the proper channels.

Meanwhile, communications with staffers, she argued, are appropriate.

“If people are contacting Liquor Board staff – well, isn’t that the staff’s job? To answer questions from licensees and the public about both general and specific topics?” Witt said.

Emails and letters raising substantive and procedural issues – from community members, as well as licensees and lawyers – are frequently included in the liquor establishments’ files, which the commissioners can review.

For cases coming before the Board in upcoming dockets, these communications have been made available online.

Matricciani’s order left some wondering whether it means written communications will not be accepted for matters that do not require a hearing.

Administrative orders, which the Liquor Board began issuing under the chairmanship of the late Judge Thomas Ward, are not mentioned in Article 2-B, the state liquor law, Witt said. State law does lay out a procedure for changing the agency’s rules and regulations, but it requires a 30-day comment period for the public and review by the city solicitor.

“By what authority does the Board justify the issuance of Administrative Orders that bypass this statutory mandate?” Ferguson asked, in his letter to the board.

“I think we are authorized to adopt these procedures,” Matricciani said, adding “anyone who wants to make a case that we are not is certainly welcome to do so in writing and we’ll consider it.”