Fearing the beer-and-brats house was going to be the kind of rowdy mega-bar they said is over-saturating South Baltimore, many residents opposed the plan.

But they encountered high-level pushback, including what appeared to be discussions between Mayor Stephanie Rawlings-Blake’s chief of staff and a Crossbar representative, Peter E. Auchincloss, about influencing a favorable zoning board decision for the project.

Ultimately, Crossbar got Liquor Board approval via an end-run. Its attorney, former Liquor Board chairman Steve Fogleman, pushed the project through using a different liquor license, one that was not deemed expired.

Last month a triumphant Fogleman posed for a photo at the bar.

His companions? Auchincloss, who chairs the Parking Authority of Baltimore City, and former mayor Rawlings-Blake, who now operates a Roland Park political consulting and advocacy firm. 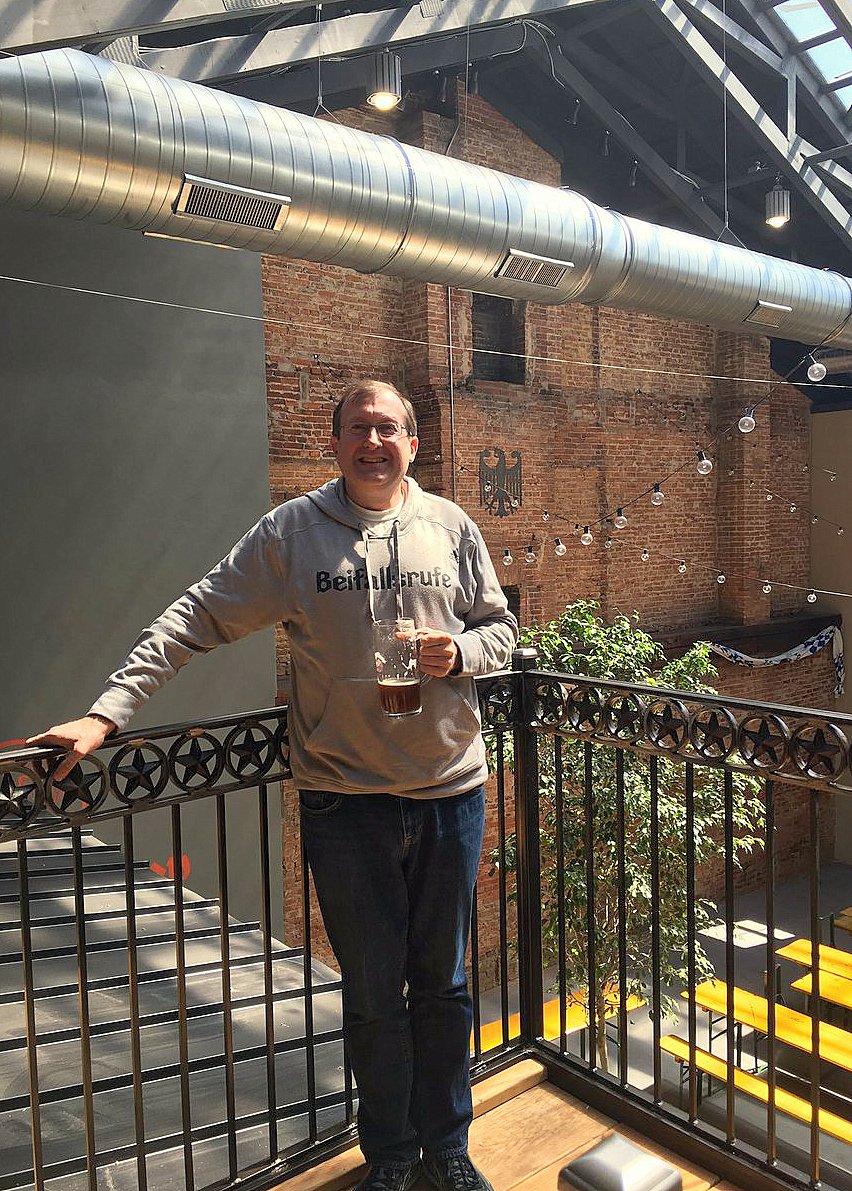 “The @BaltoBeerBaron has officially blessed the biergarten” @Crossbar_ tweeted. (Twitter)

Last week, news that residents had persuaded an appeals court to declare McComas’ other (now-superfluous) liquor license expired, seems to have rankled Fogleman.

On Twitter, as @BaltoBeerBaron, he seized on a line in a City Paper story about that Maryland Court of Special Appeals decision.

Recapping the years-long history of neighborhood battles over the project, author Ed Ericson Jr. had written that residents had expected Crossbar to cause “a proliferation of woo-girls and dude-bros.”

“Dude bros and woo girls? @City_Paper hates you, Federal Hill bars, but they love your advertising $$,” Fogleman shot back on Twitter.

Another tweet called the City Paper article “biased but interesting.”

And still another tweet, along with the photo showing Rawlings-Blake surrounded by the bar-owner and his attorneys, said, “Call us @CrossBar_ dude-bros if you like, @city paper, but don’t call her a woo-girl!”

And the Other Zombies?

The appeals court decision may have no significance for Crossbar, but it is potentially a huge turning point for city liquor regulation, according to Community Law Center staff attorney Becky Lundberg Witt.

They came up, she said, with contorted interpretations of a seemingly straightforward state law that says a liquor license ceases to exist if the establishment stops serving alcohol for 180 days (or if a “hardship extension” is granted, 360 days.)

The current board, Witt said, has been applying the rule to license transfers properly.

“This, however, gives future boards some guidance,” she added. If the commissioners are asked to transfer a license that is expired by law,  she said, they will have to deny it.

“Under the ruling, if the board transferred a dead license to someone else or allowed them to reopen with this license that would be completely illegal,” she said.

Liquor commissioner Dana Moore has not yet responded to a request for comment from The Brew. Neither has Fogleman. But McComas (@macoyster on Twitter) did express an opinion on the ruling.

“Also means the Baltimore City Liquor Board MUST revoke all licenses currently operating that were ‘Zombies’ when they were approved,” he wrote.

Witt said she found herself agreeing with McComas: “He has a legitimate point. I can see the unfairness that he feels.”

“There are lots of other establishments that are operating on licenses that are expired, though not for as long as the one he tried to use was,”  she said.

Witt said the Liquor Board wouldn’t likely sweep through the city and shut them down (“it would be a logistical nightmare”), but the commissioners “should acknowledge that, technically, they should and explain why they’re not doing that.”

Witt also said she was frustrated by all the effort it took from citizens to get the board to enforce “a very clear law.”

“One of the citizens involved in the lawsuit said it took $200,000 of donated legal help,” Witt said. “That’s just not right.” 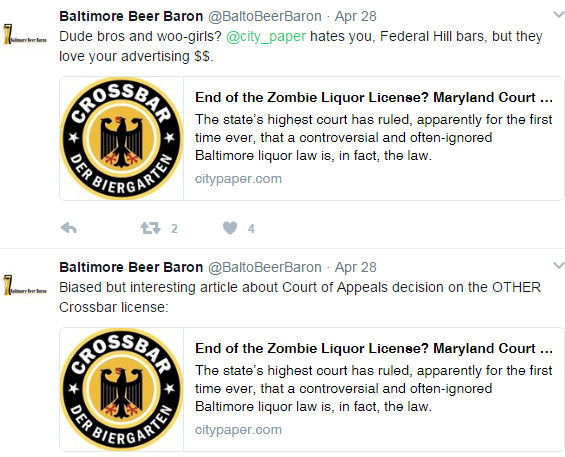 Some of the tweets by @BaltoBeerBaron (Steve Fogleman) responding to a Baltimore City Paper article on a Court of Special Appeals ruling on the Crossbar.