Neither of the men standing before the Baltimore Liquor Board looking for permission to reopen “Kings and Diamonds,” a strip club on The Block that had been shut down for more than 90 days, was actually its owner.

Licensees Roberto Silva and Mustafa Jackson each had 0% financial interest in the club, at 414-16 East Baltimore Street, according to the paperwork before Commissioner Aaron J. Greenfield.

“Is anyone here who is an owner?” asked Greenfield.

Pointing to an imposing bald man who had been in the back of the room, Silva said, “Right there: Mr. Jackson.”

“Why wouldn’t he have come up?” Commissioner Dana Moore said under her breath, as Jackson made his way to the microphone.

A quick Google search might have turned up the likely answer.

A felon turned businessman, Kenneth Antonio “Kenny Bird” Jackson is said to have inspired plot lines on the HBO series The Wire, about Baltimore and its drug trade, and a major character in the series, Stringer Bell.

Convictions including manslaughter, theft and drug possession, a murder charge resulting in acquittal at trial, allegations of political influence-buying, a number of Liquor Board violations at strip clubs he has operated, including the Eldorado Lounge that the city purchased to make way for Westside redevelopment – Jackson’s lengthy Wikipedia page and decades of news stories document his notoriety in detail. 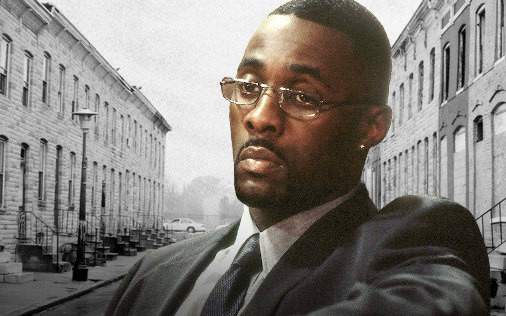 The fictional drug kingpin Stringer Bell in “The Wire” was said, in part, to have been inspired by Kenneth “Kenny Bird” Jackson. (Wikipedia)

There was no mention of any of this on Thursday, as the three-member board voted unanimously to give Jackson permission to re-open the club with licenses for liquor and adult entertainment.

“I brought [Silva] in along with my son,” Jackson said, referring to Mustafa Jackson, who was standing at his side. “They’re actually going to be running and operating the club.”

“We’re not going to have adult entertainment all the time – that’s not the way we’re going to market it,” Jackson told the commissioners.

“We want to have the ability to use that [adult entertainment license], but that’s not what we want to do every day,” he explained.

Loophole in the Law

State law prohibits those convicted of a felony from holding a liquor license, but there is no prohibition against them owning a business that sells or serves alcoholic beverages.

It’s a large loophole, according to Becky Lundberg Witt, staff attorney for the Community Law Center.

“I’m sure this has happened multiple times before,” Witt said, noting that a liquor business can have multiple owners, but only put the three “cleanest” ones on the license.

“It’s just such a glaring example in this case,” she said. “I mean, it wasn’t that hard for me to find out about Jackson’s history. What is the commissioners’ responsibility for ensuring that the ownership of a club is clean?”

Commissioner Moore, an attorney who has been acting as spokesperson for the commissioners, said she knew nothing about Jackson’s history.

“None of the paperwork we received had his name on it,” she told The Brew, adding that she would be looking into the matter. 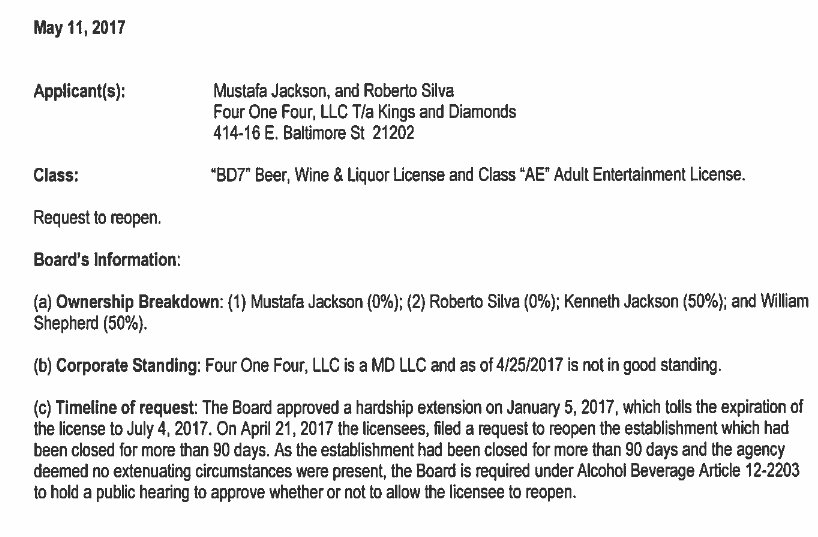 One of the documents posted by the Liquor Board for last week’s hearing on the application by Kings and Diamonds for permission to reopen. (Baltimore Liquor Board docket.)

Documents on file with the Liquor Board for Kings and Diamonds list Silva and Mustafa Jackson as licensees. The elder Jackson and a person named William Shepherd, who was not at the hearing, are listed as each owning 50% of the business.

“So you’re not on the license, right?” Moore said Thursday, pointing to Kenneth Jackson. “And you don’t own the building?”

Liquor Board rules require that each licensee be an owner and operator of the business, a provision that Witt says the commissioners have only been enforcing recently.

How, then, could they allow the club’s two young sole licensees to have no ownership in the business?

Silva said Thursday he will be buying Shepherd’s 50% share.

Describing himself as a Baltimore native who has been working as a DJ in Washington in recent years, Silva told the commissioners he envisions the club as an “upscale” venue for an urban clientele.

“We need someplace downtown that feels safe, that is clean, that is not just . . . some rinky-dink place,” he said.

At one point, Silva mentioned “my good friend Larry,” and Moore asked him who he was referring to.

Larry Young, the former city senator-turned radio talk show host, was the person he was speaking of, Silva said.

It’s a reference that harks back to the 1990s when Young, the a state senator, backed a controversial liquor license application for the Royal Cafe, a jazz club and restaurant.

Questions were raised after the licensee could not explain how the project, in the former Sons of Italy building, was to be financed ,and Jackson was reported to be the person planning to operate it.

Questions of political influence were also raised years ago about the sale of the Eldorado Lounge, a strip club operated by the Jackson family on the west side in an area slated by City Hall for redevelopment.

“The city paid the Jacksons $450,000 for the building and, later, $250,000 more to settle a lawsuit brought by the Jacksons that alleged the city reneged on a deal to move the club near The Block,” according to a 2001 Baltimore Sun story. “City officials abandoned the plan after questions were raised about the move’s legality and the location’s appropriateness.”

(One Season 5 Wire plot line has a fictional city council president reacting angrily to newspaper stories about the sale of a strip-club property owned by a drug dealer named Fat Face Rick.)

These days, the Eldorado Lounge, located at 4100 East Lombard Street, is the address of Four One Four LLC, the corporate entity associated with Kings and Diamonds, which lists Kenneth Jackson as the registered agent.

In the most recent election cycle, for example, he gave the Young campaign $1,500 through his Four One Four group.