The public was asked last night to go to the back of the room and talk to staffers at “learning stations” after city officials gave a status report on their efforts to stop sewage overflows and bring Baltimore into compliance with federal law.

But three people made a beeline for the front of the room to press Rudy Chow, director of the Department of Public Works, on the issue of Baltimore County’s sewage, a portion of which flows into Baltimore’s system.

“We estimate that about 50% of the sewage that overflows in the city originates from the county – and the county is growing,” said Larry Fogelson, of the Green Towson Alliance (GTA).

Like Baltimore City, the county is under a federal consent decree to stop sanitary sewer overflows that pollute area waterways and back-up into basements.

The trouble is that the city, which accepts sewage from its surrounding neighbor, is not exercising its authority under a cross-jurisdictional agreement, Fogelson said.

“How are you assuring that the county is holding up its end of the bargain and not exacerbating your problems?” Fogelson asked Chow. 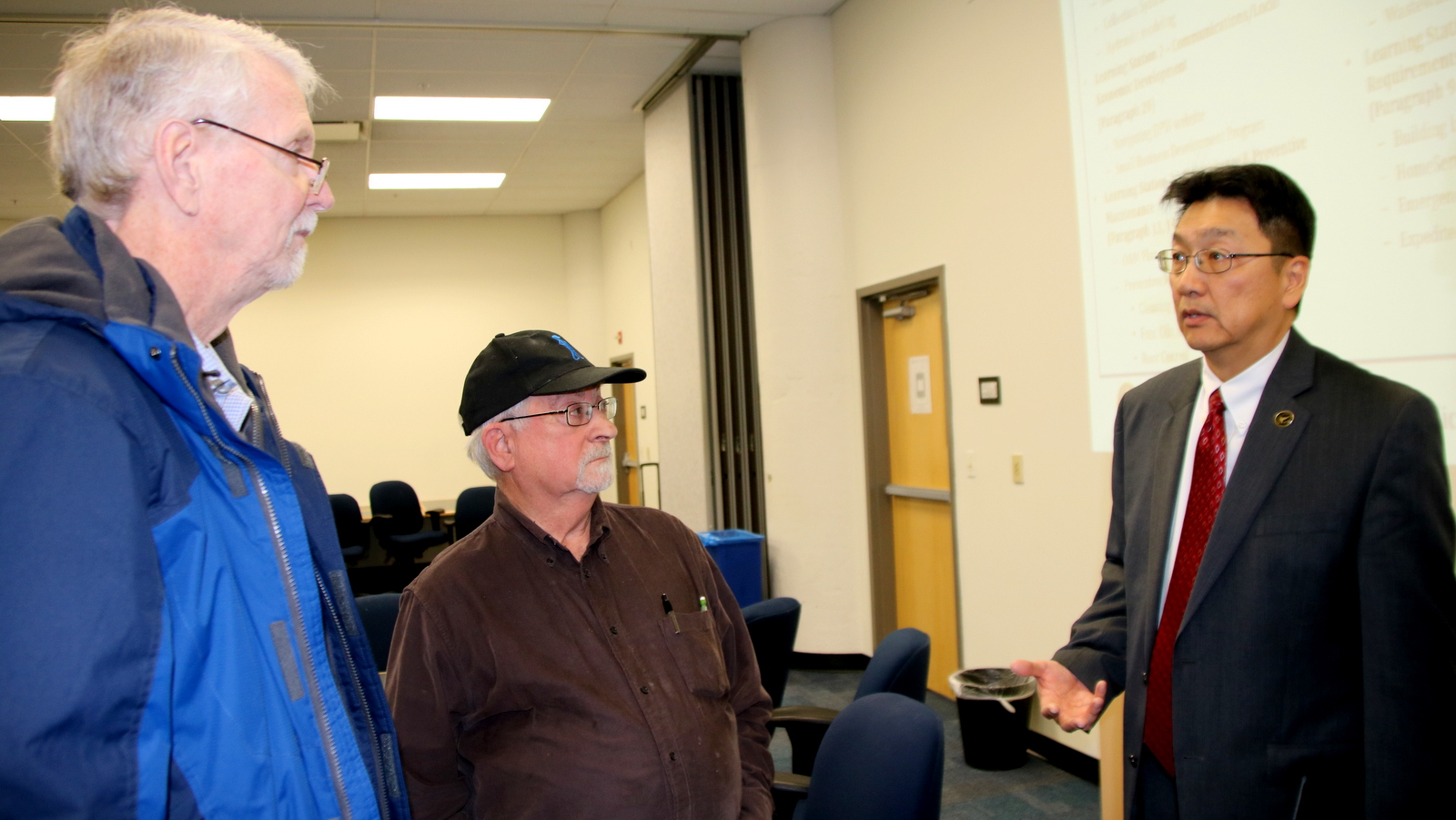 “The county’s data indicate a severe back-up going into the county sewer lines that goes into the feeder under Lake Roland. That pipe underneath Lake Roland can’t handle [the sewage] the county is already providing,” Gookin told Chow.

“Does the city have any plans to expand that pipe so there won’t be a back-up?” he continued. “Because if there’s a back-up, that goes right into the Jones Falls” and down to the Inner Harbor.

“We want to make sure our methods are methodical and we don’t have any knee-jerk reaction,” Chow replied.

About 50% of the sewage overflows in Baltimore City are caused by sewage flowing down from the county, the Green Towson Alliance says.

Chow thanked the men for their information and promised to look into the issues they raised.

But then he added, “There’s no reason for me to be doubtful about whether the county is providing us proper information.”

“There is [doubt],” Fogelson shot back, “if citizens provide to you detailed information, chapter and verse, indicating that the county’s data is not, in fact, accurate.”

The exchange took place at the Maryland Department of the Environment’s headquarters in Baltimore. Notices described it as DPW’s “first annual public meeting to discuss the city’s Modified Consent Decree.”

Sued by the federal government, Baltimore agreed in 2002 to eliminate “structured overflows,” intentional sewage releases via pipes that allow human waste to flow into waterways when heavy rains threaten to overwhelm the system.

The agreement was modified and extended after the city failed to meet a 2015 deadline to complete the work.

Now the consent decree has been extended to 2030, as the city copes with roughly $1 billion of upgrades to its sewer lines and the Back River and Patapsco wastewater treatment plants.

Phase I of the agreement calls for sanitary sewer overflows (SSOs) to be eliminated by January 1, 2021.

Last night, DPW officials promised that the $430 million “Headworks” project to increase capacity at the Back River Treatment Plant, scheduled to be completed in 2020, would eliminate 80% of the overflows.

Amid heavy rains in August, over 7 million gallons of waste-mixed with-rainwater poured into the Jones Falls, primarily from structured overflows.

Officials last night discussed the number of SSOs, but not the size of them. They said 60 of the 62 original SSOs have been eliminated.

But they also noted the presence of “additional SSO structures,” which they said have been discovered over the last 12 months.

As a result, there are now 15 SSO structures being monitored for sewage overflows, according to Paul DeSantis, DPW’s chief of legal and regulatory affairs. 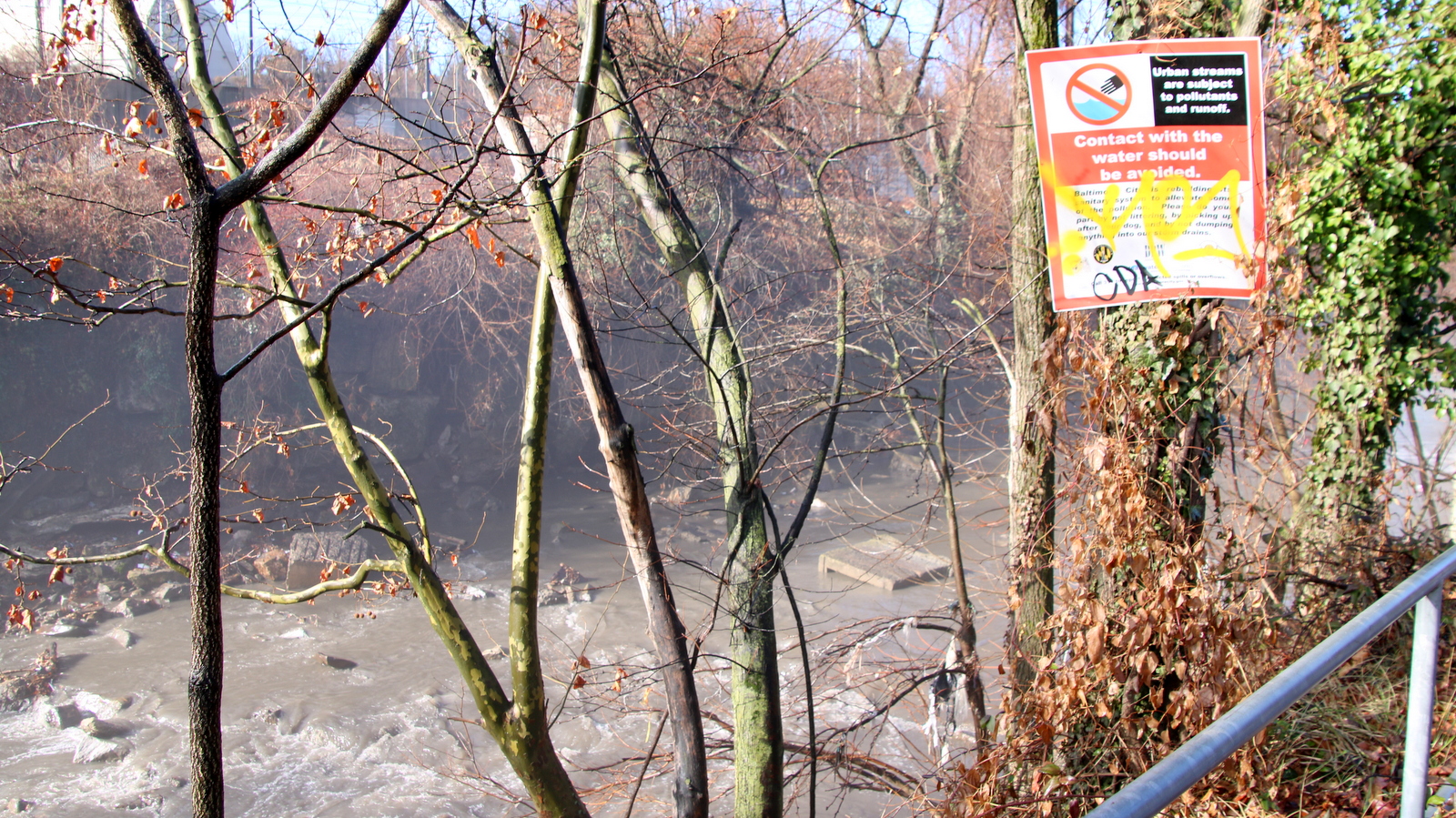 The Jones Falls yesterday, after a brief downpour, with the requisite warning: “Contact with the water should be avoided.” (Fern Shen)