Saying Baltimore’s Liquor Board is not protecting citizens from rampant drug-dealing and violence, neighborhood leaders and city and state  lawmakers are asking Mayor Catherine Pugh and City Council President Bernard C. “Jack” Young to hold a hearing to address problems with the agency.

“The Liquor Board is behaving in a very neglectful way to the community,” said Alina Lightchaser, co-president of the Waverly Improvement Association. “We’re kind of fed up with them.”

One key concern is that the board has focused almost exclusively on joint underage drinking investigations with the police department, said Lightchaser, Councilwoman Mary Pat Clarke, Delegate Mary Washington and others in a letter sent today. (See list below.)

“Complaints about violence, drug-dealing and other serious public health and safety concerns. . . do not make it before the commissioners for violation hearings,” the letter states.

Non-emergency 311 complaints are prioritized over more serious 911 complaints, according to the letter, which says the result is “a perverse system in which the board is more likely to hold a violation hearing for minor nuisance issues than for dangerous crimes.”

A “perverse system” is prioritizing non-emergency 311 complaints over serious 911 calls at the liquor board.

The problem came to light in April when the board renewed the Waverly Tavern’s license despite powerful testimony about violence and drug activity associated with the business by citizens and police officers.

The three liquor commissioners said they found the testimony – as well as  pages of documentation about 911 calls for service – “credible” and “troubling,” but said their hands were tied because the 911 police reports had not been placed on record at the board.

To Clarke, who stood with citizens at the tavern’s renewal hearing, the panel’s inaction was unacceptable.

“We just got blown off by some requirement the police did not know about,” she said. “It sounds like either this is all new or it has not been communicated properly to the community or the police department.”

The liquor board and police need to work properly together, Clarke said, pointing to the diagnosis spelled out in the two-page letter:

“The Board of Liquor License Commissioners has not set up an efficient and effective system of communication with the Baltimore Police Department.”

City Hall now “owns” the Board

The fact that Pugh and Young were taken to task for the conduct of the liquor board, a state agency, stems from a change made by the Maryland General Assembly in 2016.

In the wake of controversy over the board members appointed by Republican Governor Larry Hogan, lawmakers passed a bill transferring the power to appoint liquor commissioners from the governor to the mayor and city council president.

“This will give us an opportunity to have more accountability and more transparency with the liquor board, and hopefully a board that that holds a better balance between neighborhood interests and business interests,” then-mayor Stephanie Rawlings-Blake said at the time. 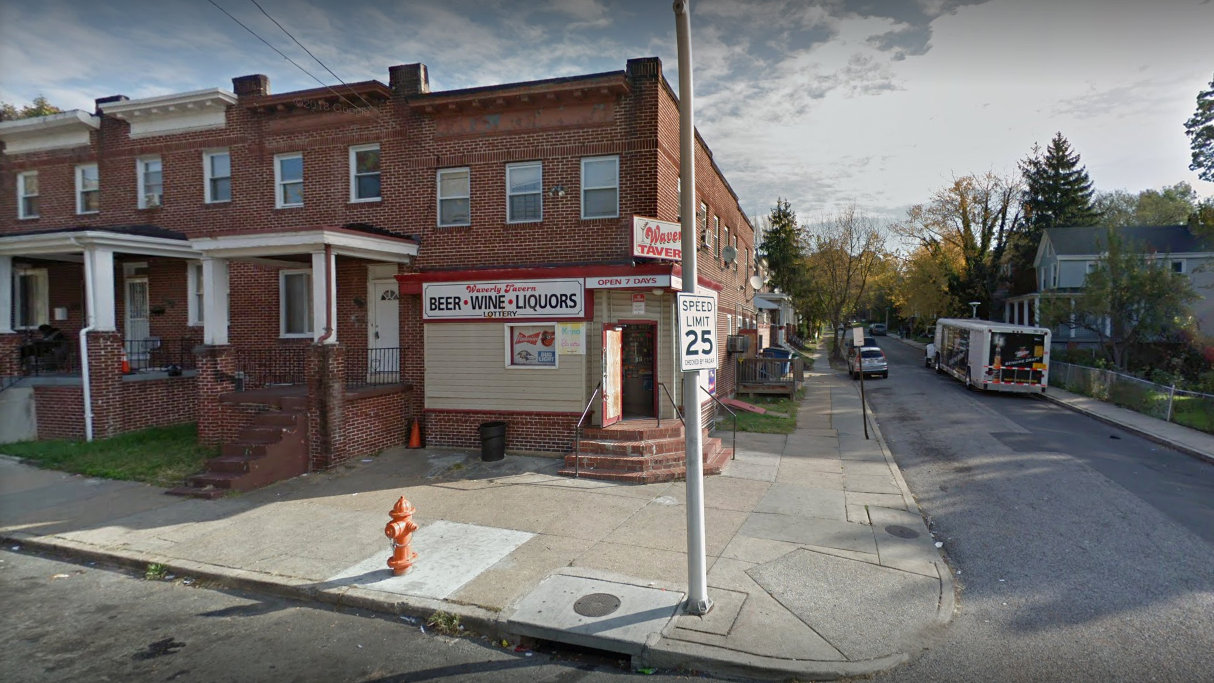 Waverly Tavern, located in a residential neighborhood in the 3800 block of Old York Road, was a good neighbor until recent years, witnesses testified at the recent liquor board hearing. (Google Streetview)

At the April hearing on the Waverly Tavern, Liquor Board Chairman Albert J. Matricciani Jr. clearly  found the disconnect between police and his agency troubling.

“I feel like I’m living in Oz or something because I have in front of me licensees who’ve had the license since 2014 without a single complaint being made,” Matricciani said. “And then I hear that they operate an establishment that is a significant cause of the worst violence in Baltimore City.”

Contacted by The Brew, Matricciani and the liquor board staff have not yet responded to a request for comment.

Lightchaser said the requirement that citizens use 311, not 911, to report problems at bars and taverns “was totally new to us.”

“We have a close relationship with the police – we were always told to use 911,” she said.

She said the community worked diligently with Northern District officers, including the homicide division, to collect documentation for the Waverly Tavern hearing.

“It was heart-wrenching, we all worked so hard on it,” she said.

Another problem the communities cited in their letter was what they said is an inappropriate insistence by the Liquor Board “that communities engage in time-consuming and burdensome mediation with licensees.”

The letter writers said mediation and MOU’s (Memoranda of Understanding) can be helpful tools, but that the liquor board has “coerced” communities into using mediation as a substitute for enforcement of the law.

“When a Health Department inspector discovers improper food storage at a restaurant, or if a fire inspector notices that a business’s emergency exit is blocked, they do not require the closest community association to meet with the owner for mediation to talk about their frustration with the problem,” the letter said.

“Instead, they issue a violation notice and/or shut the business down. In contrast, when communities approach the Liquor Board to complain that a BD-7 tavern owner is allowing drug transactions to take place in his store or giving out plastic cups so that his patrons can drink in public on the front steps of the building, the BLLC repeatedly suggests mediation and MOUs and does nothing to address the problem.”

Legislation introduced this year in the General Assembly to give the agency the power to compel mediation did not pass. It was opposed by