What does a stillborn library in East Baltimore have to do with Johns Hopkins University’s all-out drive to win General Assembly approval of a private police force?

Or $10 million of yearly grants and loans to hospitals and universities undertaking projects in “blighted” areas?

ANSWER: They’re all part of the legislation establishing a Hopkins police department.

Tying the funding of social programs to the bill is “a way to compromise the state delegation and give them cover to pass the legislation,” says Donald Gresham, president of BRACE (Baltimore Redevelopment Action Coalition for Empowerment).

“It’s a way for people to feel, ‘Oh, they’re going to give us all this money if we back their police department,’” Gresham said, complaining that the legislation gives too much power to a private entity to stop and frisk, arrest and even shoot citizens suspected of committing a crime in and around its property.

“As a black man in East Baltimore, I’m going to lose my civil rights,” he said.

The University did not respond to detailed questions about the funding package in the police bill.

Instead spokesman Karen Lancaster issued a statement to The Brew that read in part:

“We recognize that non-security interventions are an essential component of public safety strategies and are pleased that in response to community input, this bill includes a series of proposals to help address the root causes of crime through investments in community development, youth engagement and economic opportunity.”

On the Hook: Taxpayers

The spending put forward in the legislation would cost JHU next to nothing.

The university commits only $100,000 of its own money in the spending package.

This would be earmarked to the East Baltimore Historical Library, a community project yet to get off the ground despite promises of support by JHU President Ronald J. Daniels and the Hopkins-funded nonprofit East Baltimore Development Inc. (EBDI).

The spending put forward in the legislation would cost Hopkins next to nothing.

There is no cost estimate given to opening the PAL center.

Otherwise, state taxpayers could shoulder as much as $100 million by year 2030 for the open-ended “blight” program alone, according to the currently-written legislation.

The House Judiciary Committee and the Senate Judicial Proceedings Committee will hold their first public hearings on HB 1094 and SB 793 today.

The hearings are expected to attract large crowds, including van loads of students from the Homewood campus, where a student government poll found that 75% of undergraduates surveyed oppose the police plan.

Hopkins has mounted a vigorous lobbying drive, which has included a visit to the Maryland State House by former New York City Mayor Michael Bloomberg.

A 1964 Hopkins graduate, Bloomberg has donated a total of $3.35 billion to the university. His $1.8 billion gift last November is believed to be the largest philanthropic donation ever given to an institution of higher learning.

Bloomberg has vigorously backed his alma mater’s policing plan, telling reporters it was “ridiculous” and “irrational” for campus police not to be armed “when you have a city that has a murder rate that Baltimore has.” 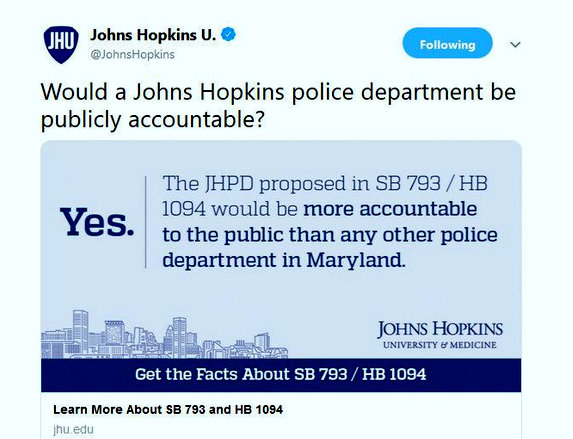 On the eve of today’s public hearings, Hopkins sent out this tweet last night.

The identical House and Senate measures would authorize a JHU-controlled police force with full arrest powers in and around its Homewood campus in North Baltimore, medical complex in East Baltimore and Peabody Institute downtown.

Currently, security officers employed by private universities in Maryland, including Hopkins, are not granted full law enforcement powers. Hopkins says it is spending $58 million on security costs this year, an increase of $20 million over a five-year period.

If handed permission by the General Assembly, the university plans to employ 100 armed police officers to supplement its current force of 1,100 unarmed security guards.

While the security guards will remain on the job as the “eyes and ears” of the university, the police force will work closely with Baltimore City Police to combat street robberies and assaults, which Hopkins says have surged since 2015.

The bills are similar to a Hopkins-backed measure that was withdrawn from the General Assembly last year because lawmakers considered it too controversial in an election year.

What’s different now is Hopkins’ efforts to recast its proposal as community uplift.

How? By turning a public safety bill into a spending bill that hews closely to the priorities of Mayor Pugh, who has backed arming Hopkins police from the start.

The public relations offensive begins with the title.

This year, the measure is the “Community Safety and Strengthening Act,” and the words “police department” and “Johns Hopkins University” do not come under discussion until page 8.

Instead, the first item of business is allocating future spending for the Seed Community Development Anchor Institution Fund.

The fund was the brainchild of Pugh and other city delegation members during her last year in the state Senate before she was elected mayor.

The Anchor Institution Fund supplies grants and loans to universities and hospitals that use the money for community development projects in blighted areas. Hopkins is one of four local institutions that initially signed up for the program.

There is no termination date for the appropriations.

The $14 million in the bill for the Baltimore Children and Youth Fund would add to the current funding of a program initiated by Council President Young.

A former employee in the filing room of the Hopkins’ Radiation Department, Young backs the policing bill. 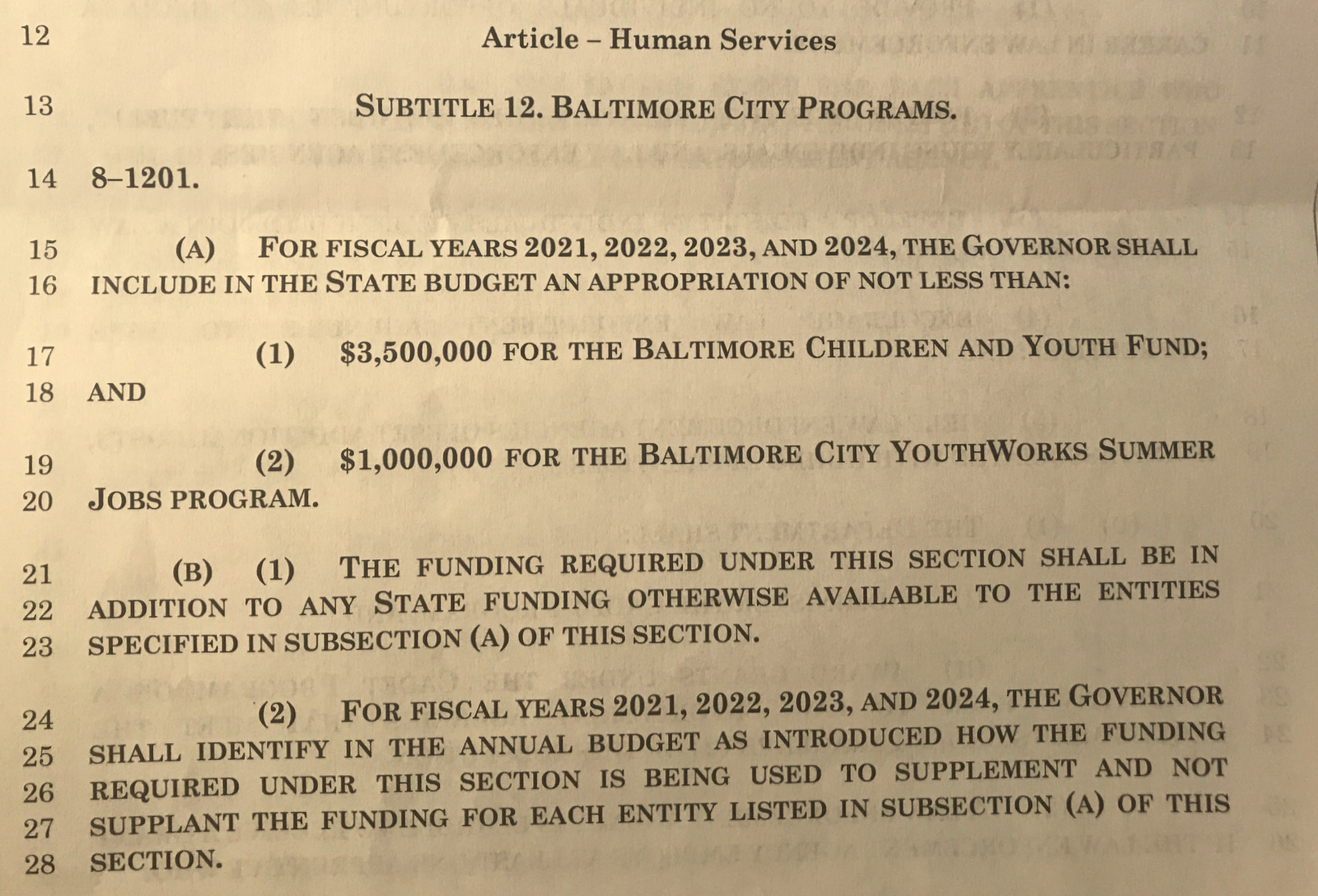 The bill also would authorize $4 million for YouthWorks, a summer jobs program for teenagers run by the mayor’s office.

The police legislation calls on the state to make, at minimum, $750,000 a year available to law enforcement agencies that have such cadet programs.

Pugh: Not my Request

After the first eight pages of appropriations for community development, human services and cadet programs, the bill devotes the next dozen pages toward setting up the Hopkins police force.

The language in HB 1094 and SB 793 is identical to the draft policing bill posted by Hopkins on January 30.

The Senate bill was introduced on February 4 by state Sen. Antonio Hayes. The bill is listed as “By Request – Baltimore City Administration,” which indicates a bill introduced on behalf of the mayor of Baltimore.

“We did not request SB 793,” Bentley said in an email exchange. “I think that was a filing error. We would defer questions regarding drafting to JHU and the bill sponsors.”

He continued, “We support this legislation and we look forward to hearing from the community and the Baltimore City delegation at the scheduled hearings on Friday [today].”
____________________________
To reach this reporter: reuttermark@yahoo.com