A gaggle of VIPs assembled at an intersection in Little Italy – the mayor, a city councilman, top transportation officials, community leaders and television crews – to witness a first for Baltimore:

The city’s first pedestrian-activated crossing beacons, installed at the corner of South Exeter Street and Eastern Avenue, where residents have complained that whizzing traffic causes crashes and makes crossing the street a dangerous exercise.

“Beacon means light – a new way. I appreciate this beacon, and I pray to God that this works,” said longtime community advocate Gia Blatterman, adding that, if the beacons don’t work, “the next step is putting in a traffic light.”

Asked if the beacons – with their bright yellow flashing lights attached to the traditional crosswalk sign – will be installed elsewhere in the city, a spokesman told The Brew that the Department of Transportation has reached out to different community associations about putting beacons in their neighborhoods too.

“We have three other beacons that will be placed throughout the year,” German Vigil said last week.

Acting DOT director Frank Murphy had a somewhat different answer, asked yesterday at the event whether the devices are being installed elsewhere.

“Not exactly,” Murphy said, explaining that other communities have asked DOT for beacons, but that the department is waiting to see how well the one in Little Italy functions first.

Murphy said he does believe the beacon will become “a tool that we can use in other places.”

Fatalities on the Rise

From 2013 to 2017, traffic-related pedestrian fatalities increased every year, according to Jed Weeks, policy director of the advocacy group, Bikemore.

In 2017, he said, there were 574 incapacitating injuries and 8,357 total injuries in the city due to traffic incidents. 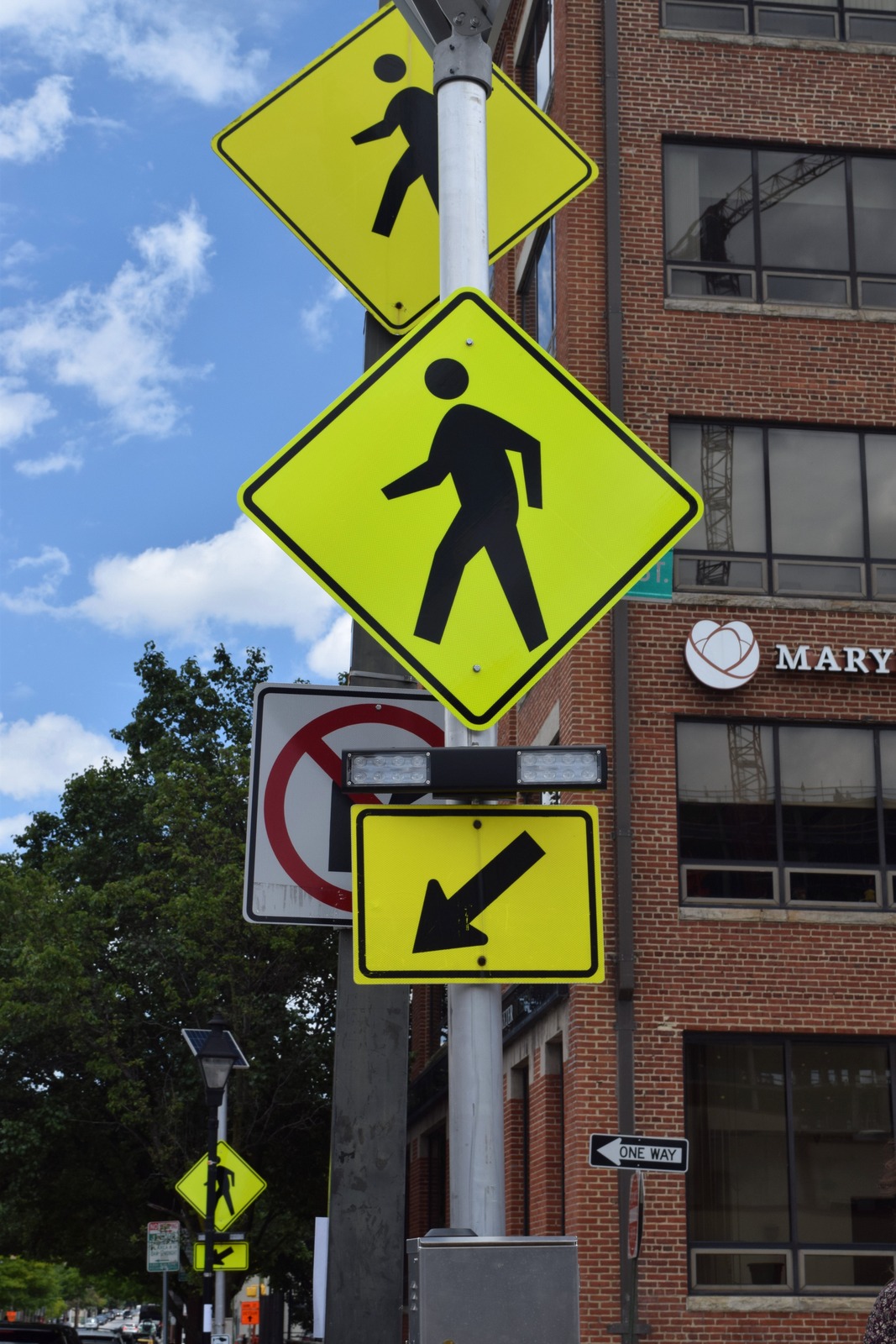 According to the vice president of the Little Italy Neighborhood Association, Dan Weiser, for the past two years, community residents advocated for change at this hazardous spot which until now has had only crosswalks designated by painted lines.

Now there are four beacons, one at each of the intersection’s corners.

Listening to and working with the residents, DOT and City Councilman Zeke Cohen came up with the idea of the beacon.

Cohen said he was thrilled to see the project come full circle and observed that he had “lost track” of the number of accidents in the area.

“This is how Baltimore gets better: government and community working side-by-side,” he said, in his address at the event.

Mayor Bernard C. “Jack” Young noted that the beacon is a “key component of our safe city strategy and one of the many ways we are working to make our streets safer.”

While the event was billed as a momentous occasion – with Young promising that the beacons would “decrease vehicle speed when activated by pedestrians” – some have doubts about their effectiveness.

The beacon is a device known as a Rapid Rectangular Flashing Beacon (RFB), which Weeks said does not guarantee a decrease in vehicle speed.

RFBs allow pedestrians to push a button that activates yellow flashing lights underneath crosswalk signs. Even in the bright light of day, the flashes can be seen.

“It doesn’t force anyone to stop – it just blinks at them,” Weeks said, adding that he favors a different type of pedestrian beacon, the HAWK (“high intensity activated crosswalk”) which creates red lights for cars.

Still, any efforts aimed at improving pedestrian safety in Baltimore are valuable, Weeks said, applauding the new beacons at South Exeter and Eastern.

Continental Crosswalks have highly visible, big rectangular stripes. Curb extensions are when curbs are bumped out to the ends of parking lanes, reducing the crossing distance.

White flex posts are put at intersections and slow down cars; these were placed with the crossing beacons in Little Italy.

Weiser, meanwhile, had nothing but praise, calling the new beacons “the right way to give pedestrians the right of way.”

Noting that she has “seen many near misses,”  Pennington said she is hoping the addition of beacons “is going to help make it safe for families . . . as long as the vehicles pay attention to the lights.”