A restaurant in Little Italy has been serving alcohol to patrons for the last three months even though it doesn’t satisfy the minimum requirements established by state law for a restaurant at its location – and the city’s liquor board has allowed it.

Angeli’s Pizzeria received a new seven-day beer, wine and liquor license in May after its attorney told the liquor board that it has the capacity to seat at least 150 patrons, a threshold spelled out in state law.

But recent visits show that Angeli’s actually provides seating for fewer than 50 patrons, 10 of which are bar stools.

According to the Baltimore Fire Department, Angeli’s has a “maximum occupancy load” of 47 persons, not 150. That’s because the restaurant’s second floor (with reportedly 104 seats) is off-limits because the owners have not installed a sprinkler system.

The licensing dispute has raised temperatures in Little Italy and pitted a feisty former liquor board chairman against an equally outspoken community activist and businesswoman.

The license holders of record, Baran Mutlu and Cuneyt “Juniet” Ozturk, submitted documents and testified under oath that they spent $776,000.06 for “capital investment” in the building.

The expenditures were meant to show they had met the minimum required investment of $700,000 for a 150-seat restaurant, which helped made them eligible for a new liquor license.

The license that was awarded to Mutlu and Ozturk cost them less than $2,000 in application and license fees. Buying a transferred license in the private market – the standard means for a new restaurant to serve liquor – costs about $75,000 in southeast Baltimore.

To reach the $700,000 investment threshold required for a new liquor license, Mutlu and Ozturk claimed to have made many improvements not visible to a customer viewing their small, utilitarian pizza shop.

The inconsistencies found by The Brew raise questions about the degree to which the liquor board and its inspectors attempt to verify whether an applicant’s documents and statements are accurate – or whether they simply take the applicant at their word.

• $6,200 was reportedly spent for an “awning,” but the building uses the same canopy frame that was there for the previous tenant, Pacific Coast Dining Co.

• $13,372.80 was reportedly spent for “window shades,” but the only visible shade is a retractable blind above a first-floor solarium, which was also inherited from the previous tenant.

• $125,815.55 was reportedly spent for “furnishings,” including $37,400 for “artist painting” and graphics. The space open to the public has no paintings and a few stenciled graphics.

• $64,000 was reportedly spent for a “new 20-foot kitchen hood with fixed fire suppression system,” but the city housing department website has no indication that a permit was issued for such equipment.

• $5,296.82 was reportedly spent on an Espresso machine even though the restaurant doesn’t offer coffee on its menu.

Asked by phone about these expenditures, Ozturk initially responded by offering explanations.

He admitted that the restaurant never bought the Espresso machine. He said he hasn’t installed the kitchen hood fire suppression system because he hasn’t been able to get a city permit. 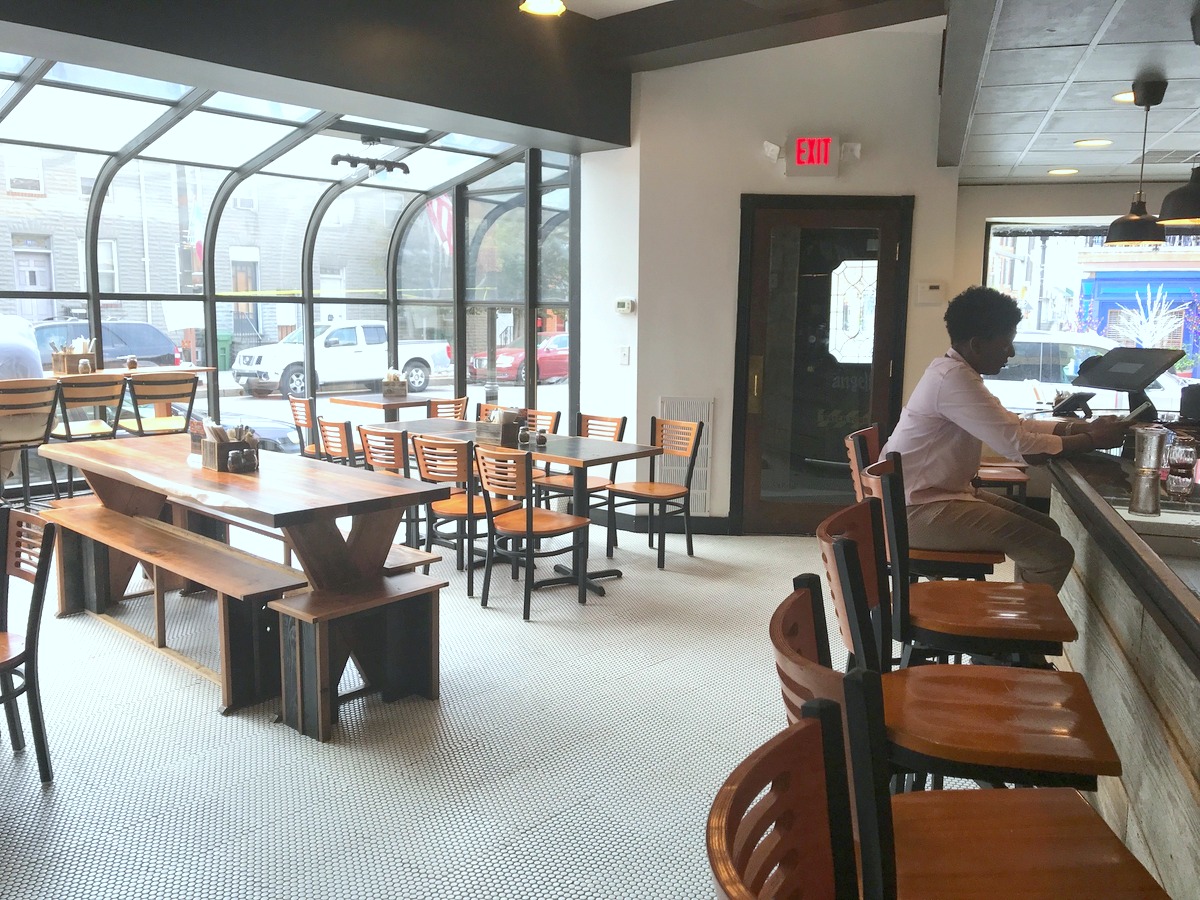 Angeli’s features a utilitarian decor, much of it inherited from the previous occupant, Pacific Coast Dining Co. The restaurant owners claim the barstools pictured above cost them $922.65 apiece. 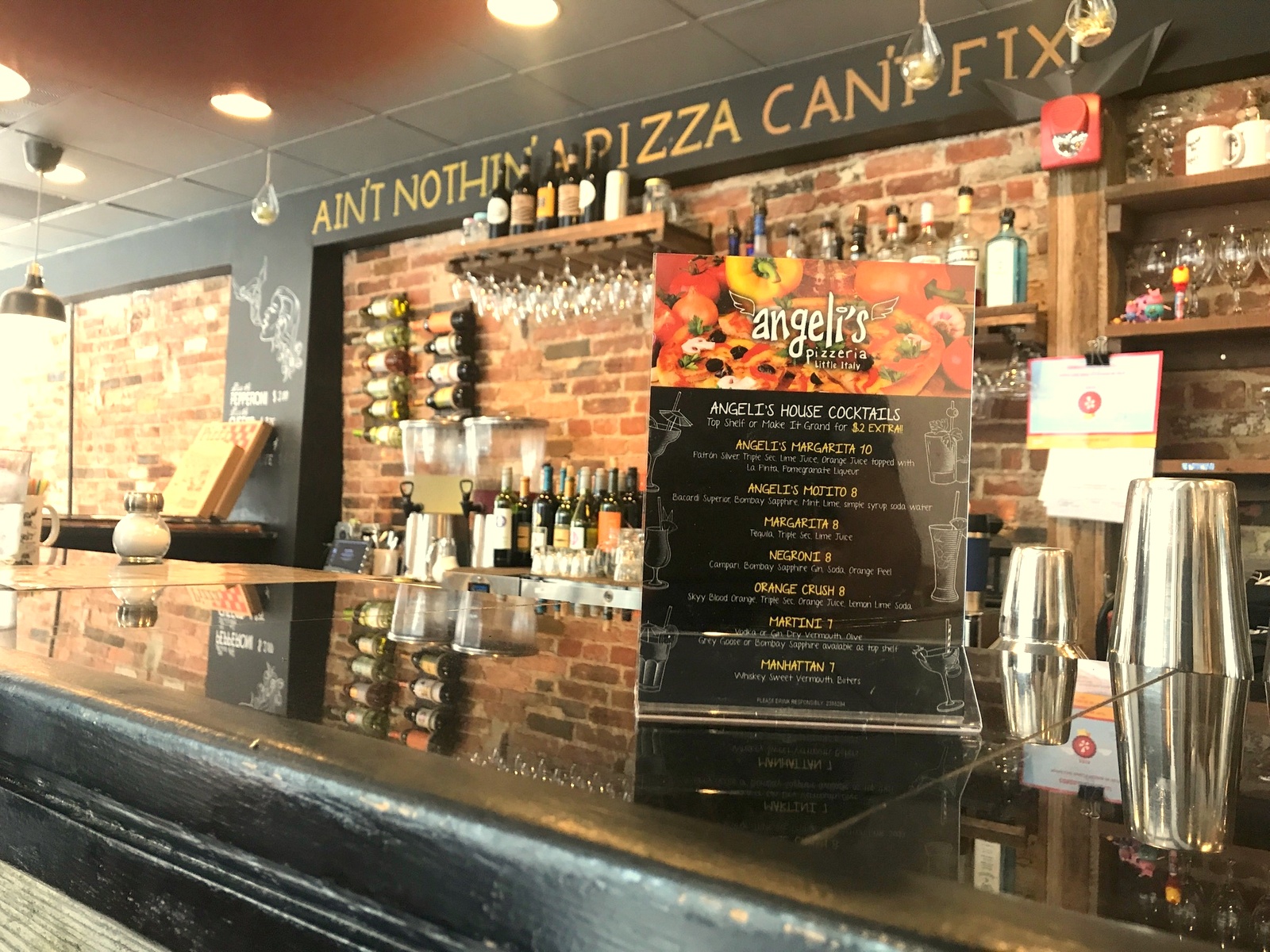 “Seems crazy to me”

The gap between the purported seating at Angeli’s and the actual count has set off alarm bells for one longtime observer of liquor board transactions.

“That seems crazy to me,” said Becky Witt, staff attorney for the Community Law Center and author of the Booze News blog.

“Seating is not a hope and a dream. It’s how many seats do you have and are approved for,” she pointed out. “And if you don’t have the required number of seats, you don’t get a license.”

The fire department ruled that even if Angeli’s installed a sprinkler system, the second floor can only be used to accommodate “approximately 70 persons” because it lacks two “remote exits,” according to a memo in the liquor board files from Sean Eames, fire commander.

Stephan W. Fogleman, chairman of the liquor board from 2007 to 2014 who now represents Angeli’s, said that “from the get go, my clients have taken every suggestion from Baltimore Fire officials and board inspectors.”

“I cannot emphasize enough,” he wrote in a written statement today to The Brew, “that inspectors have found seating for 150 persons on the premises at 413 South High Street at all times.”

The business is part of a group of restaurants that includes Zella’s Pizzeria on Hollins Street and Toss on York Road.

Angeli’s opened on March 20 without a liquor license. The following day the applicants appeared before the board and were granted conditional approval for a Class B Beer Wine and Liquor License.

On May 13, the board issued a letter allowing Angeli’s to serve alcohol for the period starting May 13 and ending on April 30, 2020. 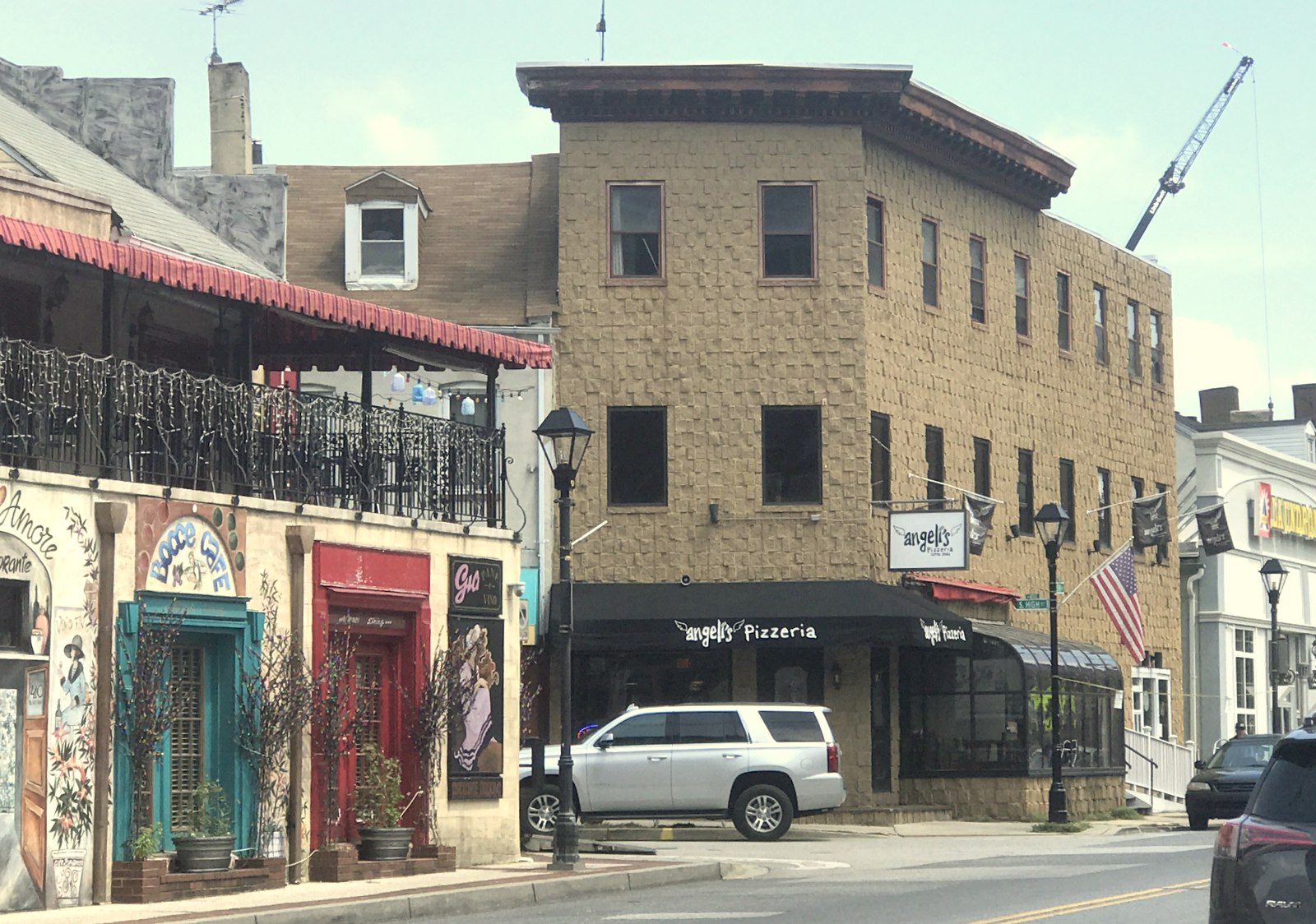 Café Gia is across the street from Angeli’s.

The issuance of the license led to an acrimonious war of words between Fogleman and Giovanna Blattermann, manager of Café Gia located across the street from Angeli’s.

Fogleman wrote to the liquor board on June 24 charging Blattermann with working behind the scenes to torpedo his clients’ business.

“This whole matter stinks of insider dealing,” he wrote, alleging that “she was going to engage the Fire Department to shut my client’s restaurant down.”

Blattermann, who is president of the Little Italy Board of Resident Property Owners, fired back, saying she had not spoken with a fire inspector about Angeli’s and had done nothing to undermine Mutlu and Ozturk.

“These statements are false,” she wrote to the liquor board. “Mr. Fogleman is the consummate Inside Dealer.”

In an interview, Blattermann said she is not against Angeli’s as long as it meets the law. She said the building had been vacant for years before Mutlu and Ozturk came along, and she is happy to see activity on the corner.

At the same time, she questioned the process by which their license was granted. She said Café Gia was required to install a sprinkler system and pass other inspections to get a liquor license.

She was surprised to find out that Mayor Bernard C. “Jack” Young met privately with Ozturk at his pizzeria after a ceremony in Little Italy on June 17.

She said she hoped the mayor wasn’t giving the owners preferential treatment. 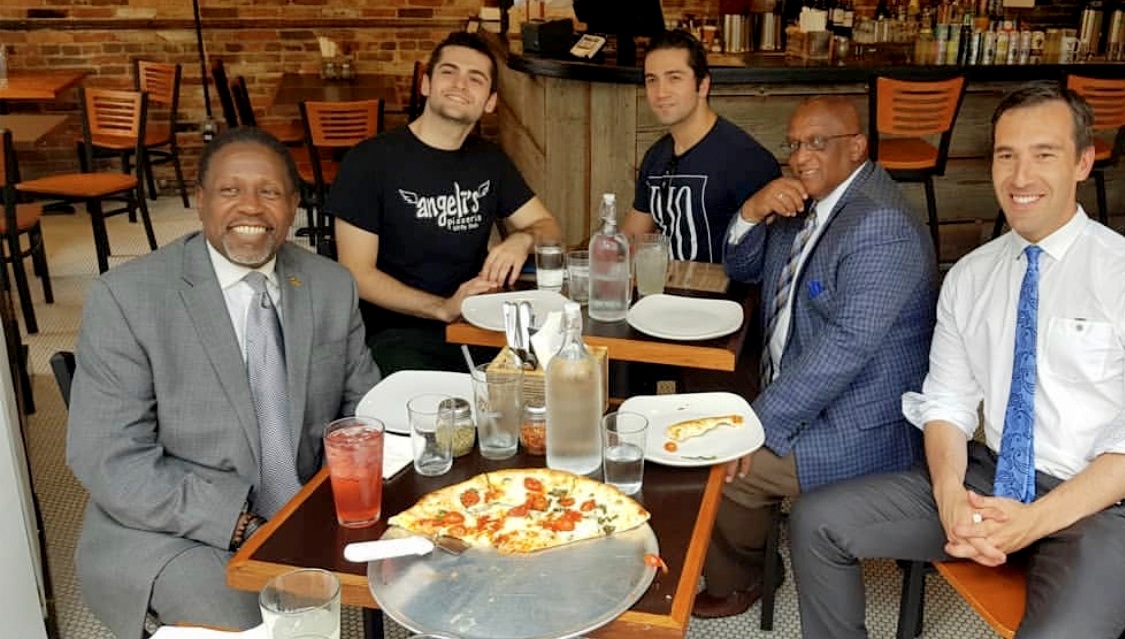 Angeli’s co-owner Cuneyt “Juniet” Ozturk (in black t-shirt) is seated next to Mayor Jack Young on June 17. Councilman Zeke Cohen is at the right. The officials visited the pizzeria following a crossing light ceremony nearby. (Posted on Instagram June 19 @angelisonhigh)

Ozturk has a prior record with the liquor board.

He was co-licensee of Bosphorus, a now-closed hookah lounge at 5716 York Road, whose license was suspended for a month in 2014 after Ozturk was caught selling alcohol to a minor, according to documents on file with the board.

In the 2016 incident, the operators were charged with locking the front door and refusing to cooperate with police and liquor inspectors.

Following that suspension, Bosphorus was cited twice more for violations while Ozturk was co-licensee.

In a 2016 incident, the operators were charged with locking the front door with underage patrons inside and refusing to cooperate with police officers and liquor inspectors seeking entry.

That lack of cooperation with authorities drew a sharp rebuke from Dana P. Moore, a former liquor board member and current deputy city solicitor.

Moore argued at a hearing that the license holders should get the maximum possible fine because they didn’t appear apologetic or seem remorseful about what they had done.

Blattermann said the community doesn’t want a business that starts out as a restaurant, then turns into a loud and unruly nightclub.

“The owner has had violations before. I don’t want them to attract a bad crowd,” she said. 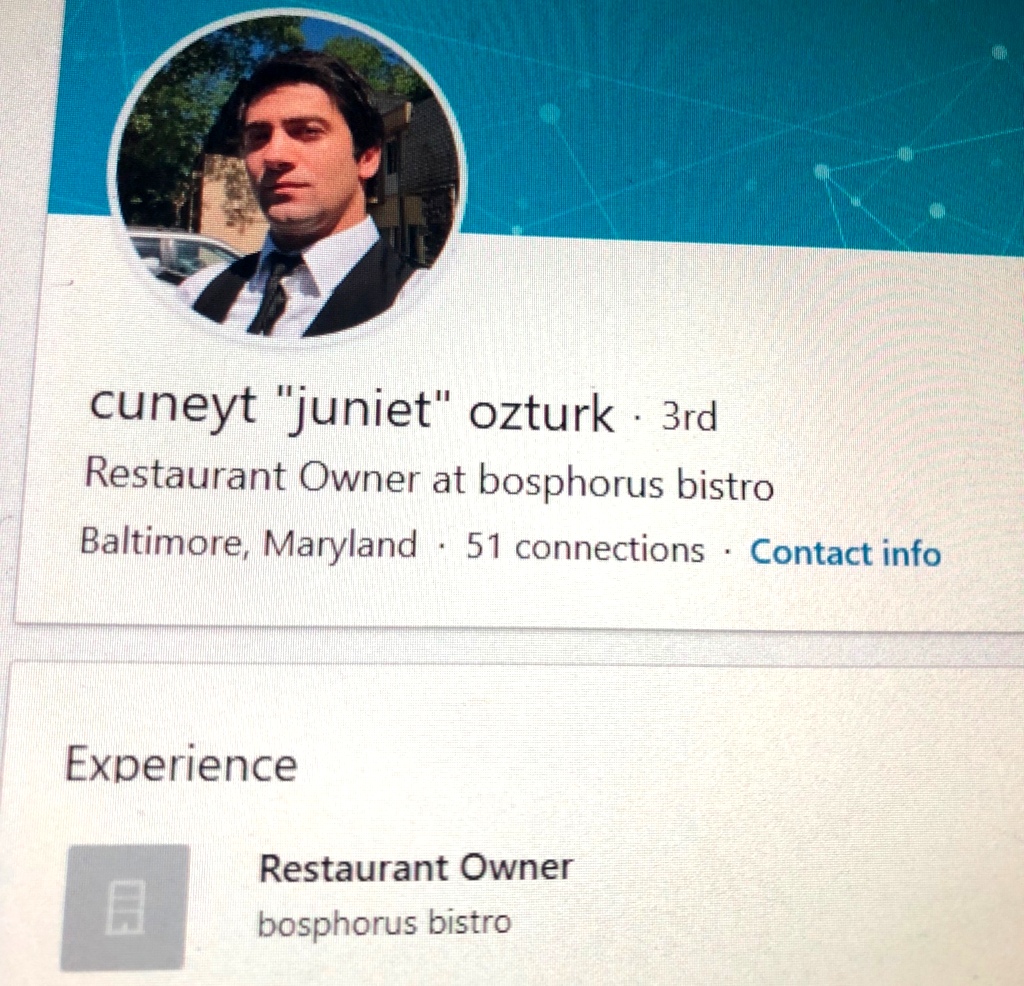 LinkedIn description of Cuneyt Ozturk as a co-owner of the now-closed Bosphorus hookah lounge on York Road.

No License for Little India

Another interested party is Chander Shekhar, owner of Little India restaurant located next to Angeli’s. Shekhar said his business currently has fire department authorization to seat 68 people and could easily be modified to seat 75 or more by making changes on its lower level.

Shekhar said he would love to obtain a new liquor license because he can’t afford to buy an existing license and transfer it to his location. 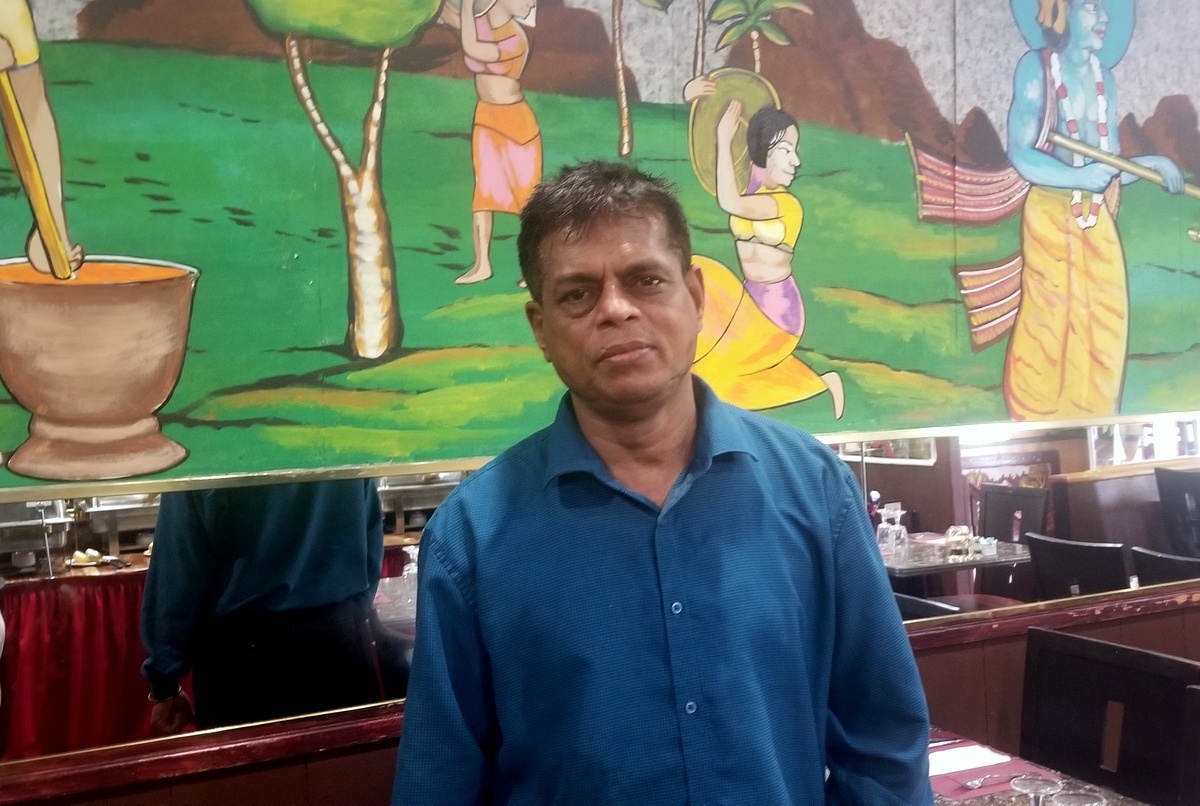 Chander Shekhar says he has more seating approved by the fire department than Angeli’s. But his restaurant can’t get a new liquor license. (Ed Gunts)

Shekhar said he can’t understand how Angeli’s was able to get a new liquor license when it has even fewer seats than his restaurant does.

Little India has been in business for three years and has 12 years to go on its existing lease. It would do more business, Shekhar said, if he could serve alcohol to his customers rather than the BYOB arrangement he has now.

“This is Little Italy,” he added. “Lots of customers here. No liquor license, no customers come.”

On June 24, the liquor board issued a “cease and desist” order, telling Mutlu and Ozturk to surrender their liquor license because the board had learned from the fire department that the “seating capacity for your establishment required by State law was not met.”

But after Fogleman objected to the order (in the same letter in which he accused Blattermann of inside dealing) the liquor board staff consulted chairman Albert J. Matricciani Jr. and ended up reversing course.

On June 25, it sent a memo to inspectors lifting the cease and desist order and saying Angeli’s is “free to operate” with a reissued liquor license “until further notice.”

“This is Little Italy. Lots of customers here. No liquor license, no customers come.”  – Owner of Little India.

Thomas Akras, deputy executive secretary, said the board has asked Maryland Attorney General Brian Frosh to become involved because it wanted guidance in interpreting how the current state law applies to Angeli’s.

He explained that Maryland adopted a new legislative code in 2016 and there has been some question about whether the new language requires a restaurant such as Angeli’s to provide 75 seats or 150 seats in order to hold a liquor license.

Akras declined to say when it expects to hear back from the attorney general. In the meantime, he said, Mutlu and Ozturk have been allowed to continue serving alcohol.

“This would be new information to me,” he said, pointing to a liquor board report dated June 11. The report said that two inspectors, Chief Mark Fosler and Agent Andy Perez, had visited Angeli’s and counted 50 seats on the first floor.

In a June 12 email, Akras wrote that the liquor board is “on solid ground” in issuing a license to Angeli’s and questioned whether the owners should be penalized for “the fire department essentially prohibiting the licensee, post-issuance, from using 100 of its 150 seats.”

In a recent interview, Akras qualified his June 12 email by saying the liquor board was definitely aware of the questions raised about Angeli’s license.