With businesses closed and most of us at home all day, many are structuring their days around solitary outdoor exercise, which is among the activities recommended during the coronavirus pandemic for physical and mental health.

But now that more walkers, runners and bikers are out, it’s hard to maintain the appropriate distance on many sidewalks and trails.

This is happening as far fewer cars are on the road, prompting local transit and environment advocates, led by Councilman Ryan Dorsey, to push for roads to be closed to cars so pedestrians and cyclists can have more space and not spread the virus.

“We’re asking people to social distance, at a distance of six feet, on five-foot sidewalks,” Dorsey said at last night’s City Council meeting, in favor of a bill that would open at least 25 miles of Baltimore roads to pedestrians and bikers during the state of emergency.

Spread Across the City

Bill 20-0532, sponsored by Council President Brandon Scott with input from Dorsey, requires the Department of Transportation to close at least one mile of road to cars in each of the 14 Council districts.

The bill would prioritize streets in neighborhoods with low access to parks or near too-crowded parks, avoid truck routes and hospitals, and prohibit any district from hosting more than 15% of the adjusted roads.

Dorsey said street closures to through traffic would be determined with community members, and that some stretches of residential streets as well as high-traffic corridors should be closed for different reasons.

“Both are even more dangerous now than usual, and both can easily be made to accommodate vulnerable users,” Dorsey said in a text to The Brew.

Scott noted at the meeting that during the summer, many houses will be hotter inside than outside, and opening roads to pedestrians will give kids more space to safely play. 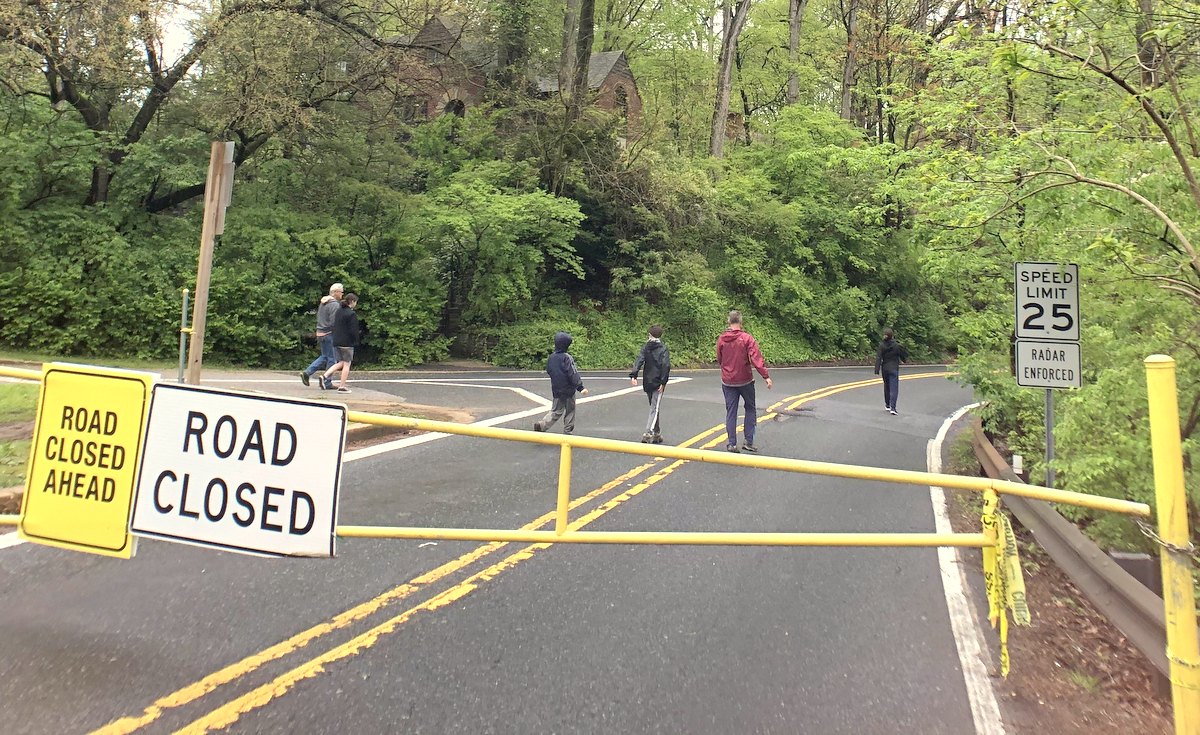 Sligo Creek Parkway in Takoma Park is one of three roads Montgomery County has opened to pedestrians Friday through Sunday. (Ian Round)

Montgomery County has closed stretches of three streets, Friday through Sunday, during the state of emergency.

A growing number of cities have opened up roadways to walkers, bikers, rollerbladers and others, including Boston, Charlotte, New York, Philadelphia, Oakland, Seattle, Kansas City and Minneapolis.

In Oakland, 74 miles of city streets (10% of total roadway space) have temporarily been closed to through traffic by Mayor Libby Schaaf. New York City Mayor Bill de Blasio has converted 40 miles, with the eventual goal of making 100 miles of roadway traffic-free.

The Scott bill doesn’t say how long the streets have to be closed to cars, nor how long any individual stretch of road needs to be.

It now goes to the Transportation Committee, which Dorsey chairs. The measure could go into effect two weeks after receiving Mayor Bernard C. “Jack” Young’s signature. Dorsey said he would announced a hearing on the bill soon.