The Maryland Department of Transportation could terminate 25 bus routes in Baltimore area this winter as part of deep cuts proposed by the agency for fiscal year 2021.

Another 24 routes could face reduced or modified service.

In addition, MARC rail service on the Penn and Camden Lines would be trimmed, with six weekday trains eliminated between Baltimore and Washington, and service north of Baltimore to Edgewood, Aberdeen and Perryville reduced.

The changes would cut the Maryland Transit Administration’s budget by $43 million, part of $98 million in cuts across MDOT. The department also seeks to slash nearly $3 billion from its six-year capital budget.

The MTA said the cuts, forced by steep declines in ridership and revenue, would “enable the agency to maintain a high level of service while meeting the budgetary challenges faced by the state.”

“The proposed changes would focus on connecting Baltimore City with major job centers and would have fewer suburban routes in Baltimore County and Anne Arundel County,” the MTA says.

The MTA said it will announce the final winter service changes on November 30, and they would go into effect January 3.

Transit advocates criticized the proposal, while acknowledging the challenges that the coronavirus pandemic has caused.

Baltimore Councilman Ryan Dorsey, who chairs the Transportation Committee, said transit is the “last thing” the state should cut given the number of essential workers who use it.

“Simply put, public transit service is critically important to our region’s economic, environmental, and public health both now and in the future,” he said.

“Reductions in transit service always disproportionately impact Black, low-income, and transit-dependent populations. Everything must be done to protect transit service during this challenging time.”

Liz Cornish, executive director of the transit-advocacy group Bikemore, also noted that Baltimoreans are more transit-dependent than residents of other areas.

“Once cuts take effect, there is no guarantee they will ever be reversed,” Cornish said in a statement issued jointly with the Central Maryland Transit Alliance. “Our already insufficient transit system will get worse.”

Find out what’s proposed and comment here. You can offer testimony online or at any of 10 virtual hearings scheduled for next month.

Dorsey’s committee is holding a hearing next Wednesday (September 9) with representatives from City Schools and the MTA to discuss how the cuts will affect transportation for students. 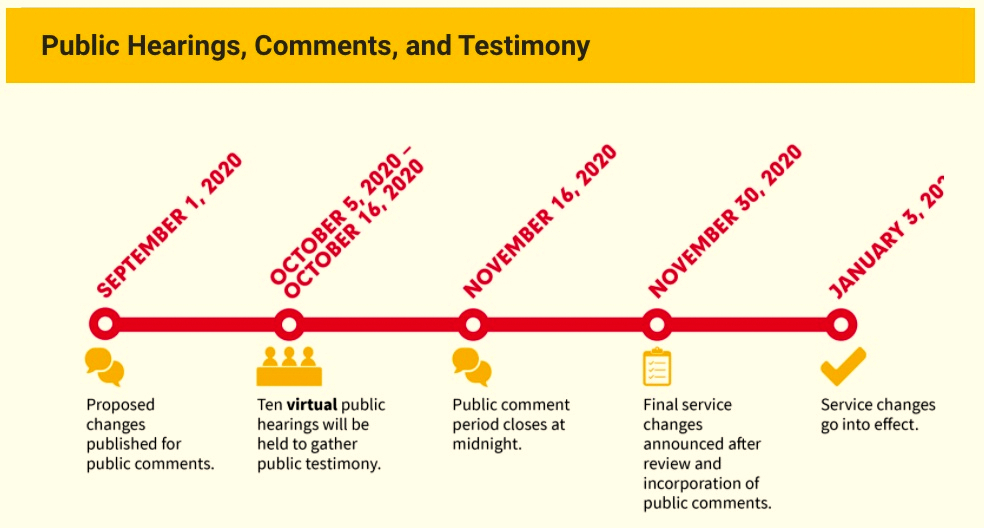