Drew Rieger had six points he wanted to make during a virtual Planning Commission meeting last week about an out-of-town developer’s plan to buy a landmark church in Mount Vernon and sell the adjacent office building.

The Mount Vernon resident, who lives half a block from the historic church, wrote down exactly what he wanted to say to the commission. He got on his computer and clicked on the Cisco Webex link for the meeting long before the church item came up on the agenda.

He sat through a lengthy staff presentation about the developer’s proposal, waiting for his chance to be heard. But when the chairman opened the floor for public testimony, he never got to speak.

“I couldn’t get on. I raised my hand to be recognized, but I never had a chance to say anything.”

Rieger said he sent a message to the city staffer hosting the discussion, Eric Tiso, indicating that he wanted to testify.

Tiso sent a reply: “OK, I believe we have your letter on file, was there anything else that you’d like to share?” he asked in the comments section as the public testimony portion of the meeting was nearing an end. “Feel free to do so here.”

Rieger said he rushed to write down his thoughts and took a screen shot of the dialogue with Tiso, capturing the comments he submitted. But in the end, he said, he was frustrated that he didn’t get a chance to communicate directly with the commissioners, respond to questions and perhaps influence their decision.

Rieger said he felt that speaking during the meeting was particularly important after he heard the chairman, Sean Davis, say the panel received 55 letters about the church subdivision, but he didn’t read them all.

“I read through the vast majority, but I unfortunately did not go through all of them,” Davis said. 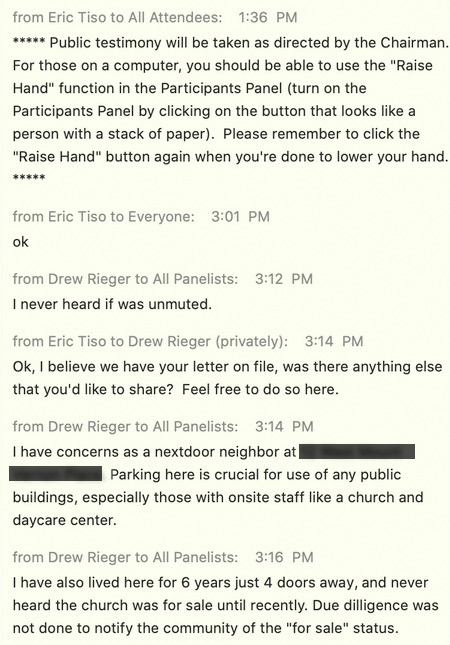 “It’s not a public reading”

Rieger said he was alarmed by Davis’s admission and wondered if his letter was one that went unread. He also disagreed with the way the contents of the 55 letters were boiled down to a three-point summary prepared as part of the staff report.

“If the chairman didn’t read all the letters, how many other commissioners didn’t either?” he asked. “That’s why I wanted to speak, to be sure they heard my comments directly from me. How can they call this a public hearing when members of the commission don’t have a chance to hear citizens speak? It’s not called a public reading.”

Rieger was not alone.

Three other people told The Brew that they attempted to offer testimony about the pending church sale and didn’t get a chance.

They all say the same thing: They logged on or called in to the virtual meeting, listened to the staff presentation and the developer’s remarks, and waited for the public testimony portion to start. But when they tried to say something, they couldn’t.

Only three people representing the community got a chance to address the Planning Commission before it approved the subdivision request from developer Joseph Novoseller.

In all, only three people representing the Mount Vernon community got to address the commission last Thursday before it approved the subdivision request from New Jersey developer Joseph Novoseller.

Others who weren’t able to speak include Michele Richter, president of the Mount Vernon Belvedere Association, and Steve Shen, a longtime MVBA board member and chair of its Architectural Review Committee.

“We were listening” via Webex, Shen said of Richter and himself. “We were trying to speak, and we raised our hands and they didn’t call on us. Many people we’ve talked to seem to have had that issue.”

“I spoke to three people,” Richter said, “and these three people were on the phone dialing in, not via Webex. They used their phone to attend.”

Ritcher said a city planner had instructed callers who wanted to speak that they would hear two beeps when it was their turn. But “those three people said there were no two beeps they heard that they could speak.” 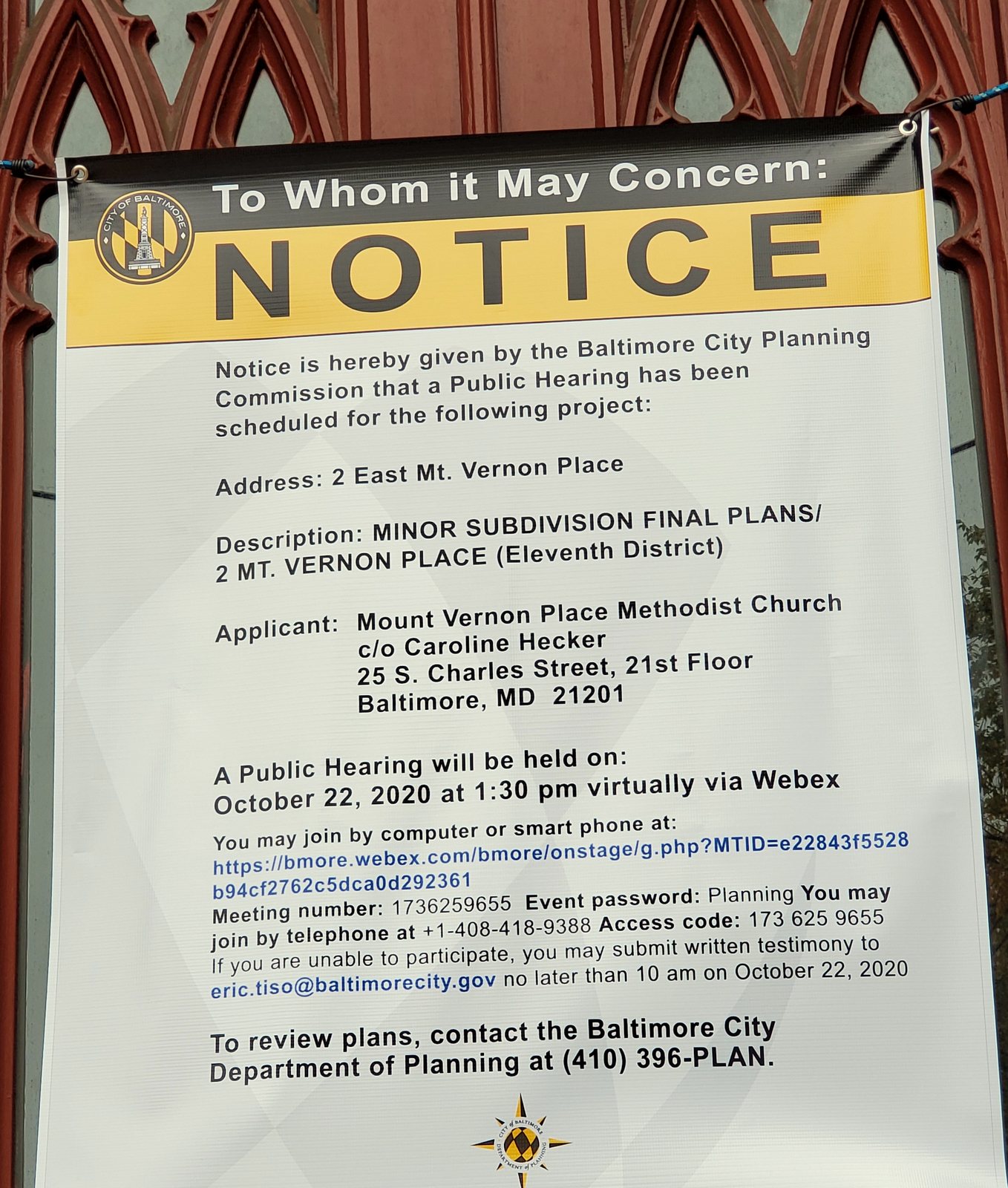 On the church door, information about how “you may join” last week’s virtual hearing. (Ed Gunts)

Charles Duff, president of Jubilee Baltimore and executive director of Midtown Development, said he intended to watch the October 22 meeting and possibly address the panel, but he couldn’t even get access to it.

Duff said he doesn’t understand why it’s so hard for citizens to participate in a public meeting that’s required by law.

“Is it customary for the Planning Commission not to take community testimony nowadays?” he asked. “What’s their attitude toward John Q. Public?”

“Is it customary for the Planning Commission not to take community testimony nowadays? What’s their attitude toward John Q. Public?”  – Charles Duff of Jubilee Baltimore.

Duff said he thinks public testimony is a useful and important component of commission meetings because it exposes panel members to facts and perspectives that help them make informed planning decisions.

Duff said he was expecting a vigorous public discussion about the church subdivision and was disappointed to learn that there wasn’t.

“It invites all kinds of unpleasant speculations. Even though they may be completely unfounded, it invites them.”

He said he was not willing to accept excuses about the difficulty of conducting virtual meetings during the pandemic. “This pandemic has been going on for more than six months. If people don’t know how to use their own virtual technology, I’m not going to give them a break.”

Thursday’s meeting ended with the commission voting 5-2 to allow Novoseller to subdivide the United Methodist Church property, so he can sell an 1850s townhouse that has served as the church’s offices for decades.

During the 100-minute discussion about the subdivision, commissioners heard from half a dozen speakers. Besides planning staff members, the speakers included Novoseller, his attorney Caroline Hecker, a real estate broker representing the church, and City Councilman Eric Costello.

The only members of the general public who got to speak were Gregory Rapisarda, an attorney representing the Mount Vernon Belvedere Association, and Steve Ziger, an architect based in Mount Vernon. Ziger said he raised his hand seconds after the panel opened the meeting to public comments and got through.

During the meeting last week, planners sent out a message containing instructions about public participation to “All Attendees.”

“Public testimony will be taken as directed by the Chairman,” the message said. “For those on a computer, you should be able to use the ‘Raise Hand’ function in the Participants Panel (turn on the Participants Panel by clicking on the button that looks like a person with a stack of paper.) Please remember to click the ‘Raise Hand’ button again when you’re done to lower your hand.”

Chairman Davis made a point of saying that he was looking online to see if others wanted to speak – and observed that “nobody else had their hand up.”

After Rapisarda and Ziger spoke to the commission, Davis made a point of saying that he was looking online to see if others from the general public wanted to speak – and observed that “nobody else had their hand up.”

Noticing that there were “a number of callers” on the phone, Davis asked Tiso to see if they wanted to address the commission.

Tiso went down the list of callers, unmuting them one-by-one and at one point saying, “If you hear two beeps, that’s me unmuting you.”

Out of 11 callers on the line, three responded with “No comment” and there was no response from the other eight.

Tiso said he wasn’t aware that anyone had problems during the hearing.

“I’m not aware of anyone not having a chance to speak,” he said in an email. “We go through quite some lengths to ensure that doesn’t happen, and that people have multiple avenues to share their thoughts (written e-mail, Chat box, Q&A box, verbal testimony), but we can’t guarantee that technology will always cooperate.

“If someone was missed,” he added, “it’d be a rare occurrence.”

• To reach this reporter: edgunts@aol.com