Bar owner Brian McComas – known in Baltimore for his controversial Federal Hill beer garden and for causing offense with his tweets – confronted the Baltimore County Liquor Board at a contentious hearing Monday on multiple violations alleged at his Ryleigh’s Oyster establishment in Timonium.

Acting as his own counsel, McComas defended the actions of his staff after a County Fire Department investigator, responding to a noise complaint, noticed guests frolicking maskless last month.

The encounter rattled the investigator, prompting her to call 911 – but not because of the restaurant’s lack of adherence to the county’s Covid-19 rule  requiring face coverings to be worn inside a restaurant.

Despite wearing her badge and identifying herself, the inspector said she feared for her safety when a manager became irate and followed her into the parking lot.

“It was a very shaken-up thing for me,” the inspector, identified as “Inspector Hill,” said. “This is the first time this happened to me. . . You could see how terrified I was.”

In a combative tone, McComas cross-examined Hill, challenging her testimony that she had identified herself and calling her a “temporary employee” for the county’s “Covid task force.”

More than once, Board Commission Chairwoman Susan Green admonished him to stop.

“She has asked and answered the question repeatedly,” Green said to McComas. “You are badgering this witness. You’re not going to badger this witness.”

Closing in the City

Referring to the people involved in shootings as “thugs,” he said they “don’t give an F about a ceasefire.” He also used the hashtag “village idiots” to describe organizers of the Ceasefire movement.

McComas apologized and said his comments were aimed at government leaders and were misconstrued, but he continued to face charges of racism and calls for a boycott.

Last May, he permanently closed Ryleigh’s Oyster in Federal Hill amid the shuttering of restaurants across the city in the wake of the coronavirus pandemic.

At that time the Baltimore Business Journal noted that the State of Maryland had entered a $7,726 tax lien against Ryleigh’s in February. Another $17,061 lien was entered for the Padonia Road location in January.

Another Ryleigh’s location, in Mt. Vernon, closed in 2017. 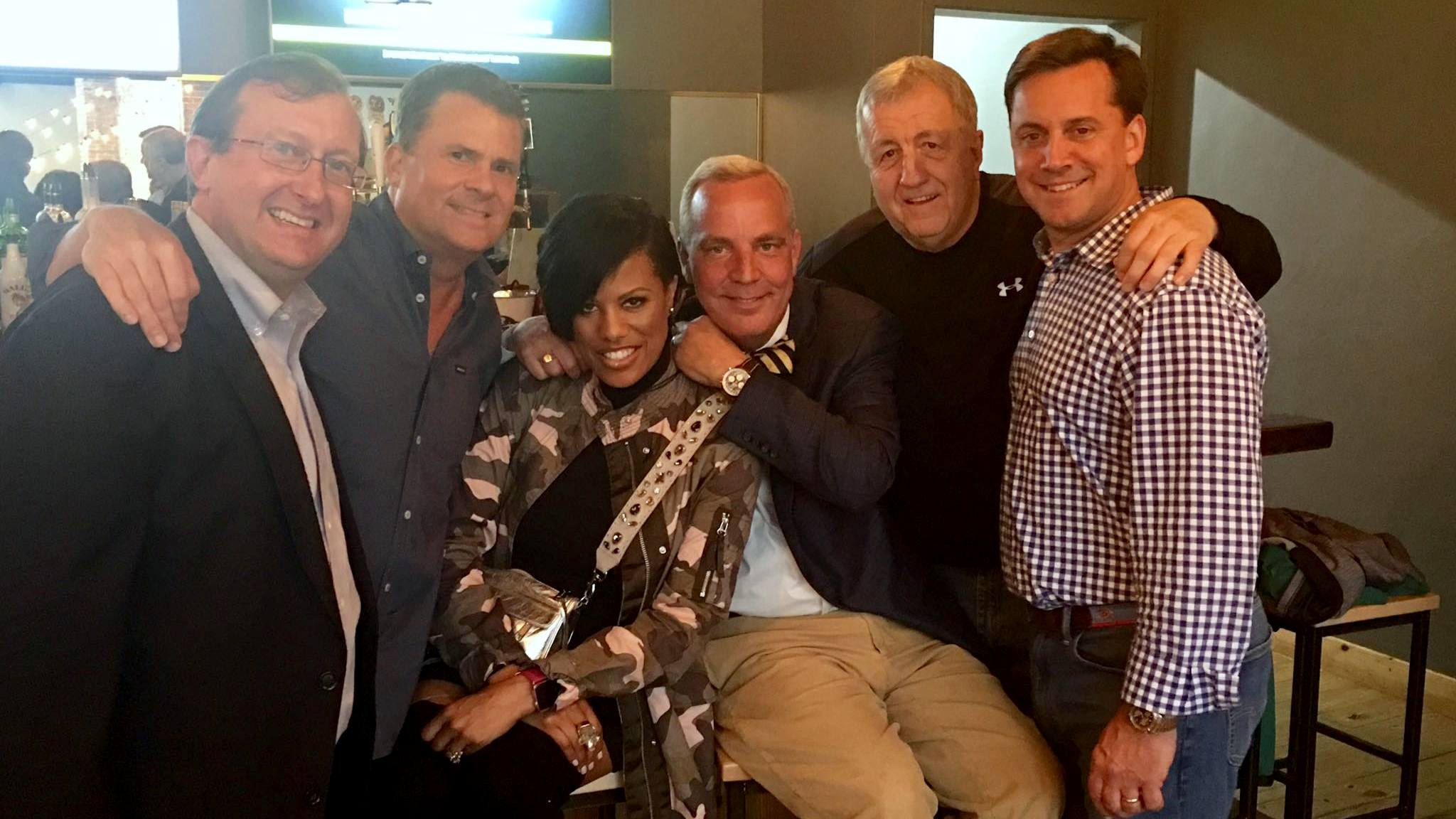 In 2017, McComas won city liquor board approval for his Crossbar der Biergarten project, the subject of years of appeals, packed hearings and legal actions by neighbors who said he was using political influence to bend the rules for a project that would create a nuisance “mega-bar.”

When the beer-and-brats joint opened, he celebrated there, joined by his lawyer, former Liquor Board chairman Stephan Fogleman, as well as former Mayor Stephanie Rawlings-Blake and other supporters.

During yesterday’s virtual hearing, McComas said he was not present at the time the inspector arrived, telling the commissioners that he had left the restaurant 15 minutes before.

But in making his case, he insisted that the only unmasked people dancing at the bar were members of a band hired for entertainment.

McComas grilled the inspector on her claim that she had complied with his mandate, displayed on a sign in front of the restaurant, requiring all county and state personnel to check in with management before entering.

The measure was put in place because “imposter” investigators had earlier shaken down his employees for crab cakes, McComas testified.

The measure was put in place, McComas testified, because “imposter” investigators had earlier shaken down his employees for crab cakes in exchange for letting violations “slide.”

He said a police officer would back up his account that Hill did not identify herself.

But the officer did not appear at the hearing because, McComas said, he was on vacation. 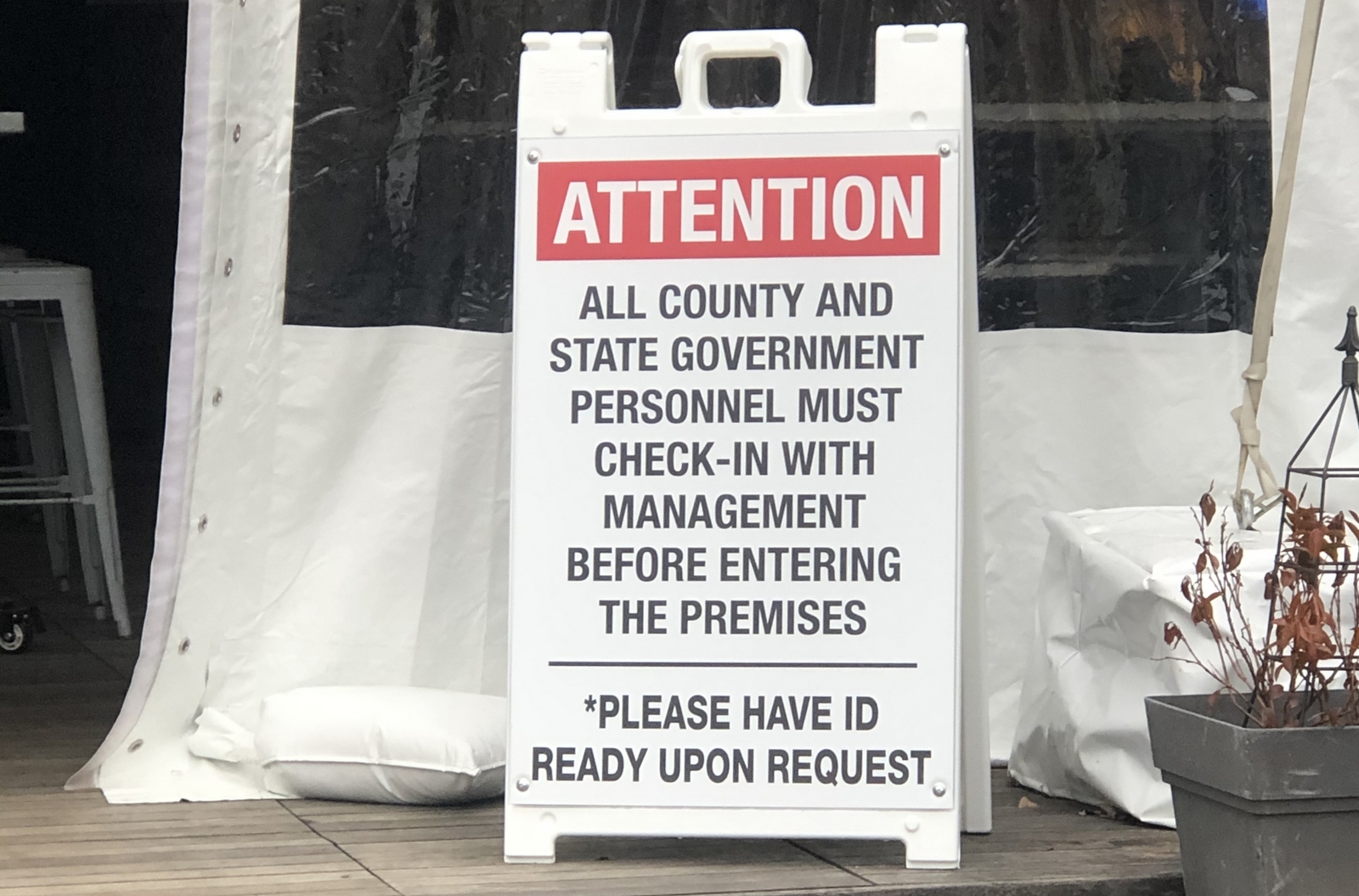 In the end, the commissioners found that Ryleigh’s had violated two provisions of Baltimore County’s Rules and Regulations.

Michael Mohler, the board’s chief administrator and brother of former interim Baltimore County Executive Don Mohler, said he noticed non-compliance with the county mask mandate when he hand-delivered a letter from the health department to McComas regarding the matter.

But he also took pains to note that when dropping off the letter, he had complimented McComas on the restaurant’s tent set-up.

“I would love to have stopped in to have some oysters and some beer, but I was still on duty,” he added, addressing the owner.

Despite the reduced fine, there were some harsh words for McComas. Commissioner Thomas Kaiser questioned the legality of the establishment’s sign, noting that a government official may inspect an establishment’s premises.

“This is the right of the liquor board,” he said.

Green asked him why his wife, Jennifer McComas, wasn’t at the hearing, a requirement since she is the restaurant’s only licensee.

Green also asked McComas whether his managers had undergone background checks and if they were registered with the county since the board’s staff looked, but could not find, any such registrations.

McComas insisted that he had filed the paperwork several times. He later asked Mohler if there was a fee to register his managers, and if he could have a registration transferred for one employee from a previous job.

Neither Brian nor Jennifer McComas was reported available when The Brew called Ryleigh’s today for comment.