Baltimore school officials are scrambling to respond to an outcry from parents and teachers after The Brew disclosed on Tuesday that most school buildings have not installed ventilation upgrades less than a month before some students and staff are scheduled to return for in-person learning.

During an online Town Hall held tonight for parents, the most repeated question, said the City Schools moderator, was about repairs to make buildings Covid-19 safe.

“They’re wondering: are we going to have the proper filters and purification equipment installed?” he noted, as hundreds of typed-in comments scrolled across the screen. “And will we be ready in time?”

“Schools don’t even have heat and running water. How can we go back?” one parent asked.

“Why are students being sent back to rooms that have zero windows and walls that do not go all the way up to the ceiling?” another wanted to know.

A virtual town hall on Wednesday for teachers reportedly drew more than 3,000 questions from teachers and staff, who recently learned that a phased return to school buildings is going forward amid the pandemic.

“Folks were upset and told the administration they are not happy with a plan that is unsafe, premature and reckless,” said Corey Gaber, vice president of the Baltimore Teachers Union.

School officials have announced a program to administer Covid-19 vaccines to 500 teachers and staff members per week. At that rate, to cover all school personnel would take 20 weeks and not be completed until late June or early July. 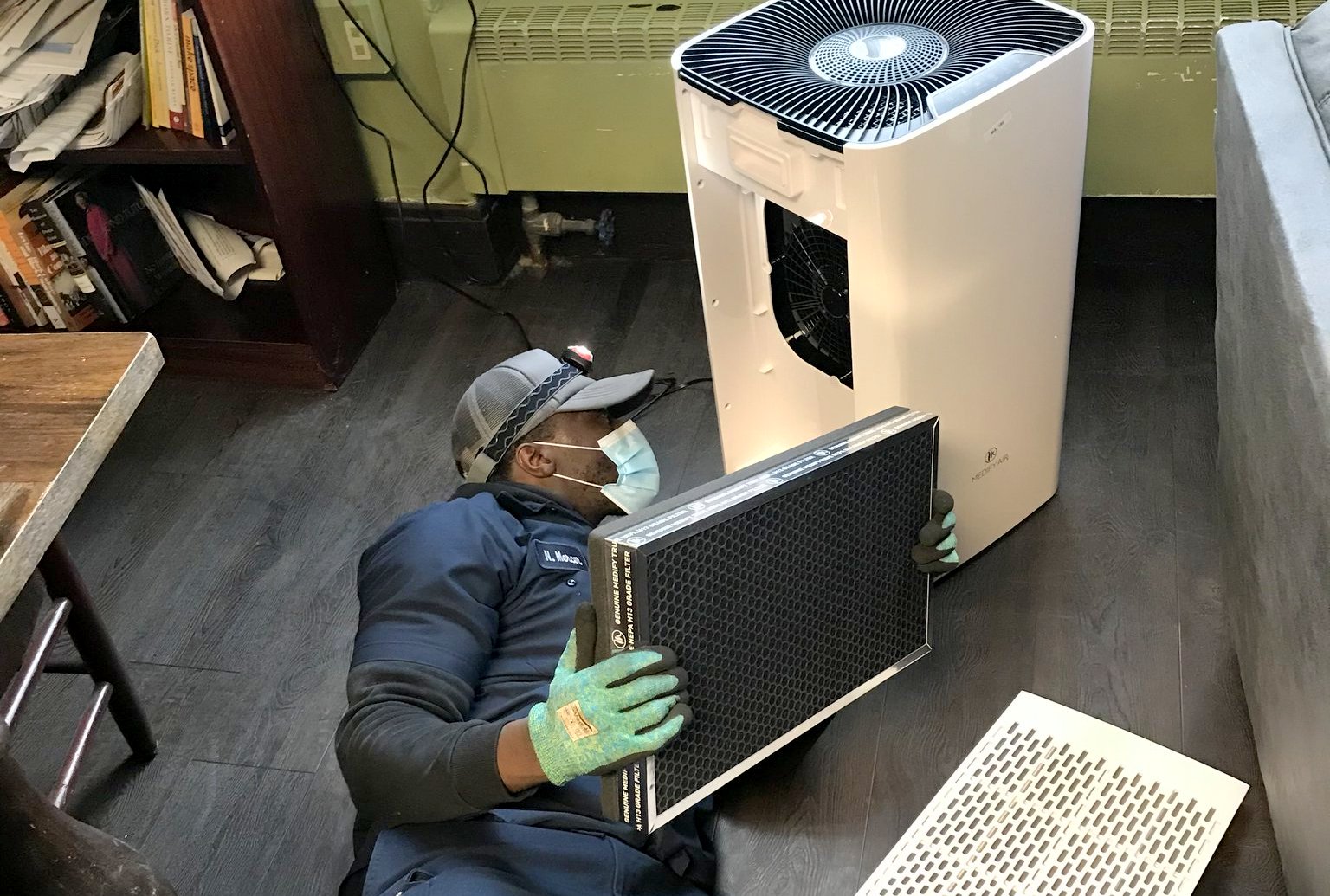 A worker lies next to a newly purchased air purifier for use in Baltimore schools. (@BaltCitySchools)

On Tuesday, The Brew published a City Schools document showing that only one in four school buildings has been upgraded with either high-grade filters or semi-permanent air purifiers.

Among the buildings yet to be upgraded are scores of elementary schools, whose kindergarten through second-grade classes are scheduled to open February 16.

Also without the needed upgrades are prominent high schools, such as City College, Digital Harbor High, Mergenthaler Vocational and Western High, whose ninth graders and seniors could return to classes on March 1.

On Wednesday, City Schools posted photos to show how they intend to protect against the virus if other ventilation systems prove incompatible, inadequate, are not yet upgraded or malfunction:

“We have purchased over 8,336 air purifiers to improve indoor air quality in our schools,” they tweeted. Several photos were shown of workers unpacking boxes of the plug-in devices at a warehouse.

The newly arrived portable purifiers will be placed in classrooms without upgraded filters or permanent air purifiers as a stop-gap measure to keep air circulating to reduce the potential spread of the deadly pathogen.

Gaber says the BTU is worried that the portable units will not provide the level of safety needed in aging buildings with poor air flow and in newer structures whose windows cannot be opened.

“You can bring in these purifiers, but it doesn’t have anything to do with the air exchange rate,” he said.

Speaking with The Brew, Riley lashed out at the union leader’s comment calling it untrue and “a reckless assertion from someone who is not an expert on that topic.”

“And it rings hollow to show pictures of air purifiers that are not installed in buildings where people who are not vaccinated are going to be working – or in some cases are already working,” Gaber added.

Even before tonight’s town hall, some parents criticized what they said was the district’s slow preparation for a reopening.

“In-person learning stopped on 3/13,” one tweeted. “Why did it take 10 months to address ventilation?” 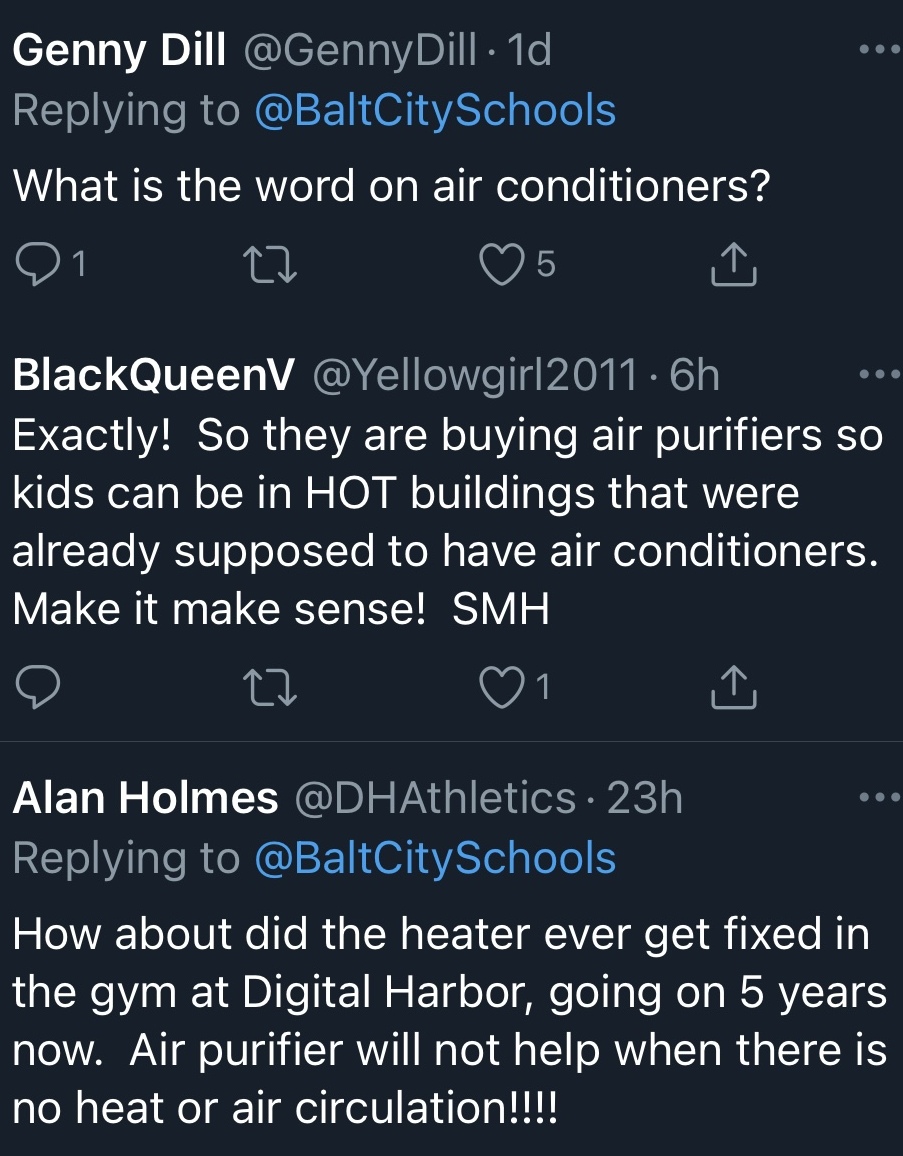 To Reopen or Not

Some elected officials have joined the call for the district to modify its reopening plan. Councilmen Zeke Cohen, Ryan Dorsey and Kristerfer Burnett are calling on CEO Sonja Santelises to postpone reopening and develop a phased in approach in which teachers are not required to teach in-person until they are vaccinated.

Breaking from the ranks at North Avenue, School Board member Durryle Brooks has also opposed reopening.

Cohen said he and his colleagues support a return to classrooms but “only as it becomes safe.”

“Given the condition of the buildings, and that so many people have asthma and health issues and so many factors, it just seems premature,” he said.

“We have all been talking for years about improved school buildings,” he added. “I mean, I taught in a school that lacked heat, air conditioning and drinkable water and looked like a prison.”

Maryland Gov. Larry Hogan today joined the debate on the side of reopening schools, releasing a hybrid program for school districts to resume in-person teaching by March.

“There is no public health reason for county school boards to keep students out of schools,” Hogan said, acknowledging that he is not empowered to order schools to reopen.

Re-starting in-person learning “seems like far too big a risk to be taking this winter,” she said, citing The Brew’s article on the dearth of high-grade filters.

She noted that a new, highly contagious strain of Covid-19 has been identified in Maryland and “not all of Maryland’s educational staff will receive the vaccine by even late spring.” 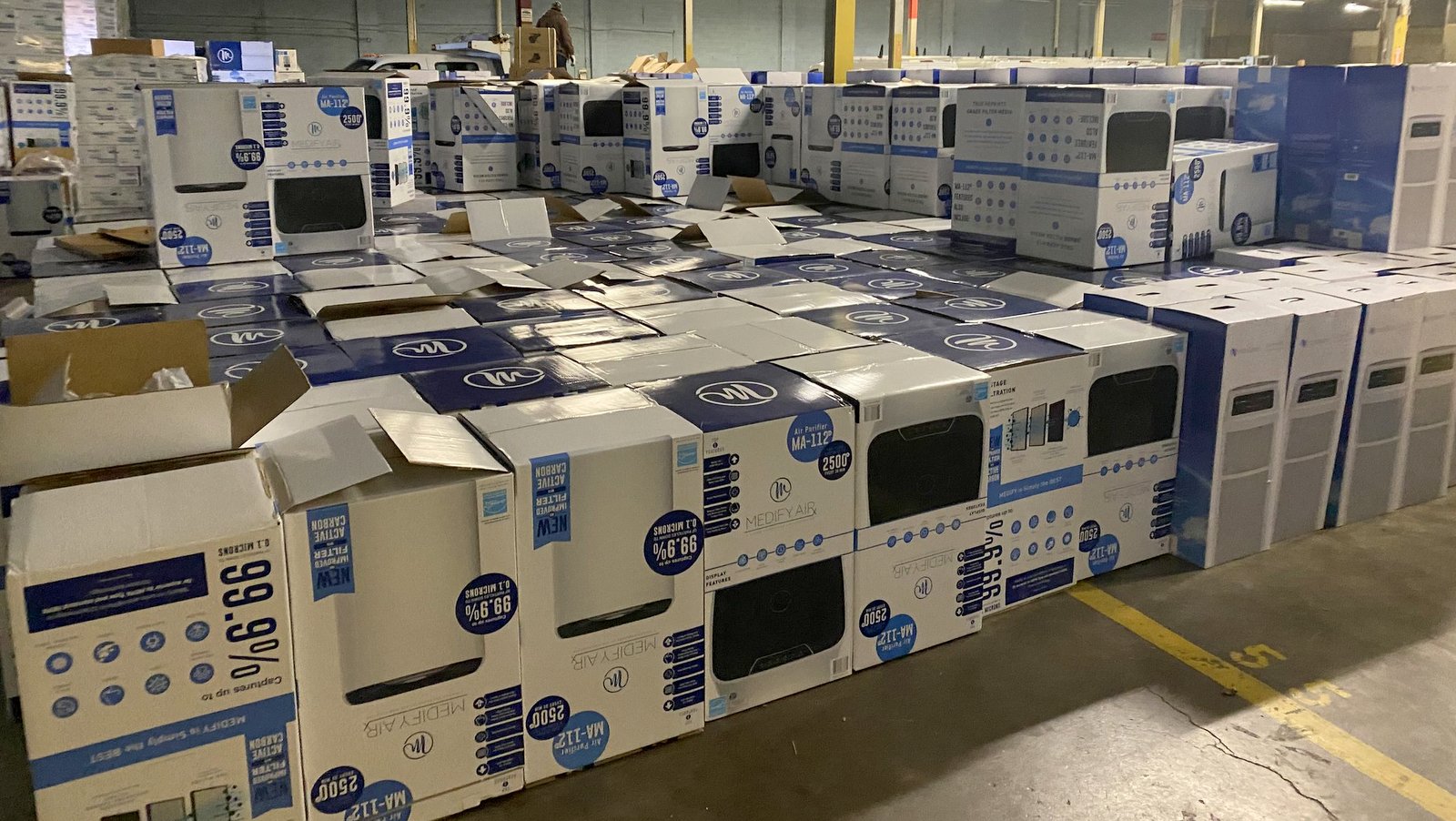 Thousands of the air purifiers ordered by City Schools. (@BaltCitySchools)

In addition to tweeting about its raft of portable purifiers, City Schools provided The Brew with an updated “Facilities Air Filtration Status” list.

As of Wednesday, high-grade MERV 13 filters have been installed at only 28 of 90 city schools slated for ventilation upgrades.

At 28 other schools, filter installation is “in progress,” while in the 34 remaining schools, “some filters may be in the inventory, but due to supply chain issues, the team is waiting on additional filters to begin the full installation.”

What’s more, 57 city schools cannot install MERV filters because the ventilation system is too old or the air rate exchange is poor.

These buildings will be equipped with semi-permanent air purifiers or the newly delivered plug-in units. 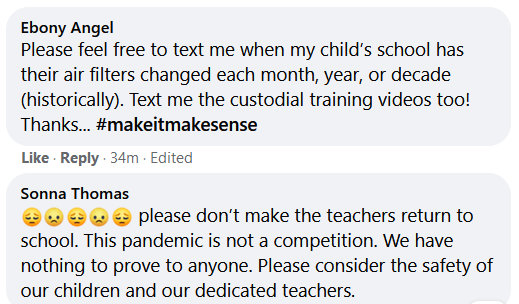 “We have enough purifiers”

The Centers for Disease Control and Prevention (CDC) recommends installing high-grade filters in indoor setting to reduce the risk of exposure to Covid and lower the spread of the disease.

Experts say that MERV 13 filters trap 85%-90% of Covid particles floating in the air.

“Calling a facilities manager?” scoffed one parent. “It typically takes several days to weeks to get a facilities person in.

What if a purifier or ventilation system breaks down during the school day, Washington was asked.

“If the filtration – which is your air purifier that may be sitting in a building that doesn’t have a MERV 13 upgrade – if that breaks down, then all we have to do is the person would call their facility manager for that particular site, and they would bring another unit to be installed in that particular site,” she answered.

“Calling a facilities manager?” a parent piped up at that moment on the right side of the screen.

“It typically takes several days to weeks to get a facilities person in. How will that change now?” 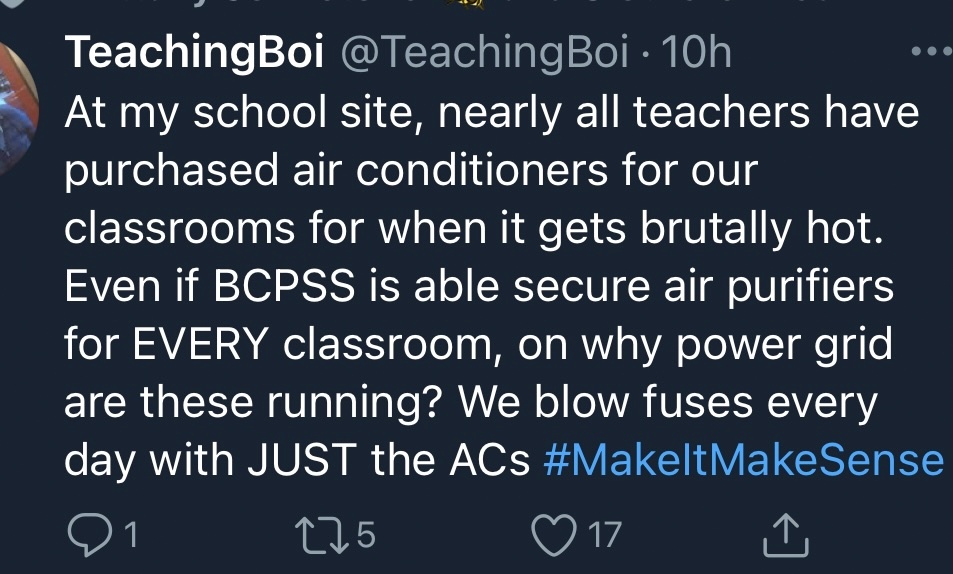 • To reach a reporter: fern.shen@gmail.com