The people lobbying Mayor Brandon Scott about the “Security Deposit Alternatives” bill have been coming at him hard:

On Tuesday morning, a large banner was hung from a balcony at City Hall urging Scott to veto bill 21-0022. A similar protest banner was strung up on a nearby parking garage.

Both banners namechecked Rhino, the NYC-based company that has been using an unregistered lobbyist and organizing roundtable events with City Council members to promote the measure, which a coalition of advocates say will victimize rather than benefit low-income renters.

“We are ashamed that our Council President and the majority of City Council members . . . forced the Security Deposit Alternatives bill at the behest of hedge-fund backed Rhino’s unlicensed lobbyists,” the Cancel the Rent Coalition wrote in a statement this week, calling the company “predatory” and likening it to “a payday lender.”

The Baltimore Sun, meanwhile, has advised Scott to sign the bill in an editorial saying it will give renters “alternative choices.”

But the biggest push on behalf of bill 21-0022 is coming from inside City Hall – specifically, from Council President Nick Mosby and Vice President Sharon Green Middleton, the bill’s sponsor.

“At its core, our bill is about choices,” went a tweet by Middleton, earning a “like” from Rhino CEO Paraag Sarva and another from Alex Fiance, CEO of Rhino’s financial backer, the venture capital fund Kairos.

But that language of “choice” and “empowerment” obscures who is being empowered, say critics, who argue that the bill’s backers and The Sun have mischaracterized what it does.

An opinion they obtained from the city Law Department backs them up. 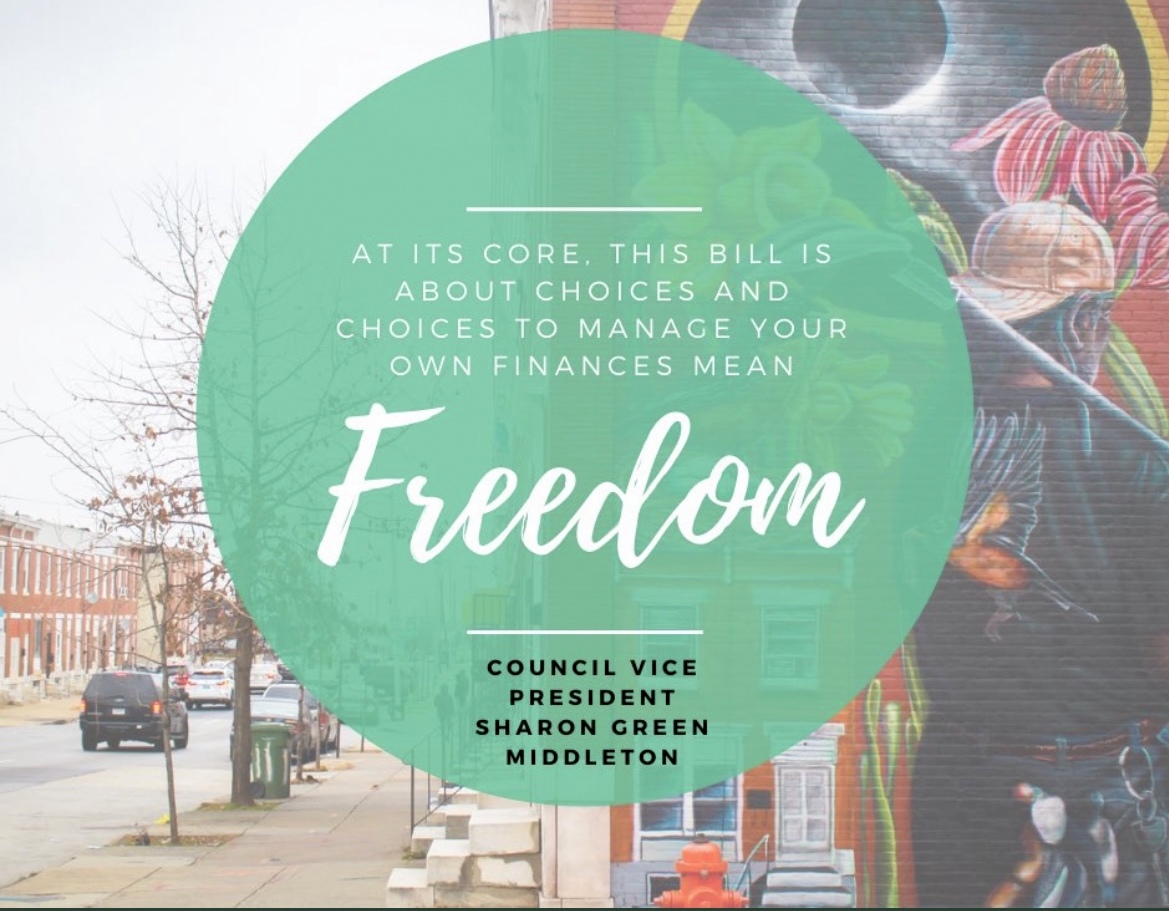 Graphic tweeted by Councilwoman Sharon Middleton uses an image from a mural at Decker and Monument streets, apparently without the permission of Nether, the artist. (@CCMiddleton)

Passed by the Council on April 5, the measure is intended to help city renters for whom paying a traditional security deposit would be a struggle. It was one of several measures aimed at providing housing relief amid the coronavirus pandemic.

Under the bill, landlords with 10 or more units who charge a security deposit of more than 60% of a month’s rent would have to include in the lease “the offer to accept one of the two following options in lieu of the required security deposit.”

One of those options, the chance to pay off the security deposit in monthly installments, has broad support.

But tenant advocates have opposed the other option – the opportunity to buy “rental security insurance,” a financial product that is actually a surety bond – saying it could saddle unsuspecting renters with fees and charges they could not contest.

“This has the very real potential of permitting bad actors to cause harm to Baltimore residents with impunity,” Molly Amster, of Jews United for Justice, testified before a Council committee last month.

“This has the very real potential of permitting bad actors to cause harm to Baltimore residents”  – Molly Amster of Jews United for Justice.

Tenants will be attracted by the low premiums – as little as $5 to $10 per month – offered by Rhino and a number of similar start-ups that have materialized in recent years.

But critics say renters may be in for a shock thinking that making the non-refundable payments leaves them “covered” in the case of a broken lease or allegedly damaged apartment. The landlord can turn to the company for payment, but the company then pursues the tenant for repayment.

Unlike with insurance, these surety bonds leave tenants responsible for the entire cost. Instead of having the charges deducted from an already-paid deposit, the renter receives a bill.

“Imagine the double shock when the invoice includes arbitrary extras, like processing, administrative, legal and collection fees, not to mention interest charges that will compound quickly if the tenant does not reimburse the surety within a very short time,” wrote Marceline White, executive director of the Maryland Consumer Rights Coalition.

“We are intimately familiar with the ways that sophisticated contracts confuse and take advantage of consumers,” wrote White and co-authors Tisha Guthrie, of the Bolton House Residents Association, and consumer rights lawyer Jane Santoni.

Another criticism the products offered by private companies is that they leaves tenants with fewer options when they believe a security deposit has been improperly withheld.

Instead of being able to challenge the landlord in court, the tenant must dispute the charge with the company. Rhino has said these disputes are rare and that it promptly resolves those that arise.

Critics point to the frustrated customers who have posted horror stories about being over charged – and then ghosted – on the Better Business Bureau for Rhino.

That’s how a $3,000 deposit turned into a $6,000 bill from Rhino, college student Peter Steininger told the housing policy journal Shelterforce.

Steininger said he and his roommates thought the policy meant they would get their deposit back. “We didn’t really understand what it was,” he now says. 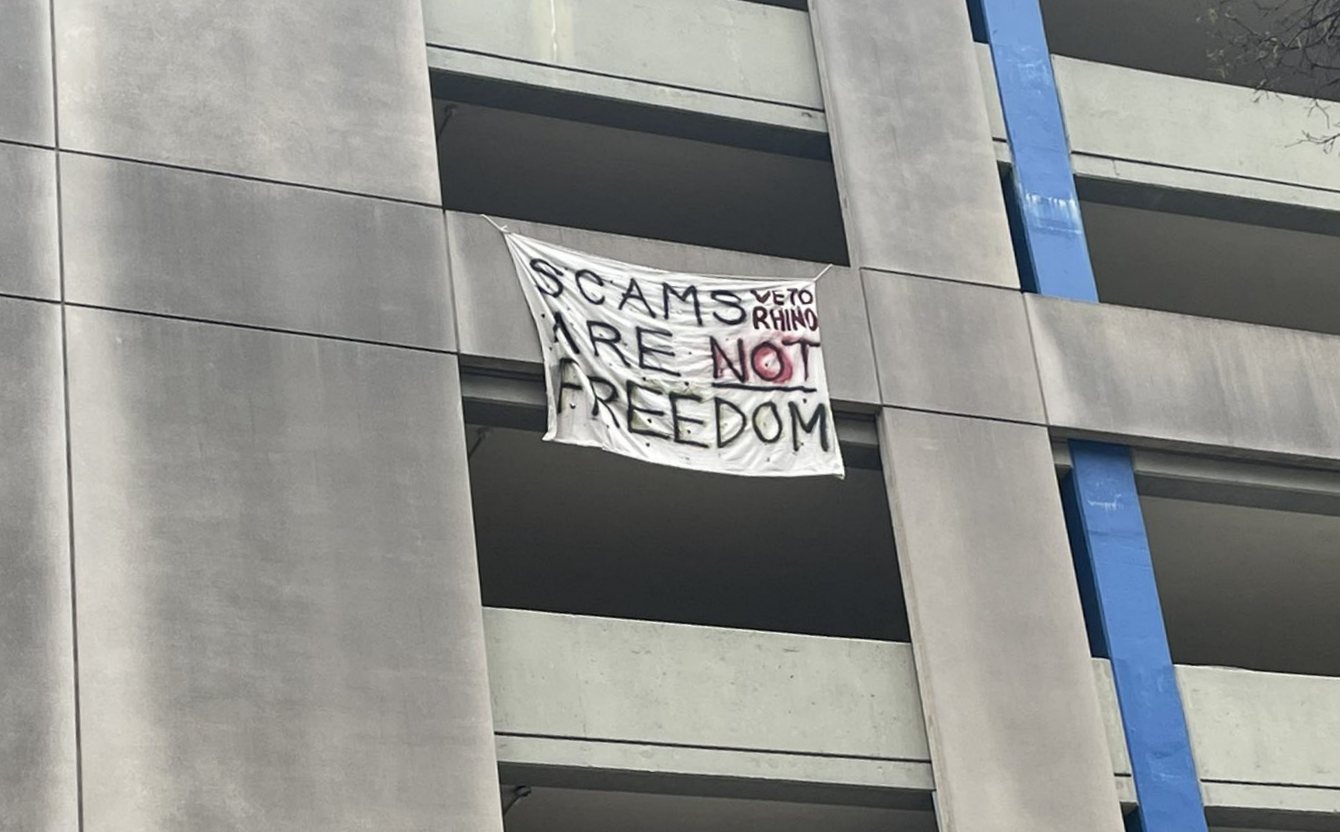 Protest banner near Baltimore City Hall against a bill that would require landlords to offer security deposit alternatives, including a surety bond product marketed by Rhino. (@trustpunch)

Council President Mosby, however, argues that surety bonds are a better alternative than going to court to try and recoup a standard pre-paid security deposit.

“There’s really no protection other than you having to go after and get a lawyer who’s going to take a taste and try to sue somebody to try to get $1,000 or $1,200 back and that never happens either,” he said on WYPR.

By contrast, with the surety bond approach, “the onus is now placed on the landlord through the insurance commission,” Mosby said. “It’s a  regulatory body of the state that will have protections for the renter.”

Critics say instead of being able to sue, renters are required to sign arbitration agreements (like this one) that generally cannot be appealed.

The new approach should be given a chance because it will “put stable and secure housing within reach for more people, permanently,” said sponsor Middleton, who participated in a February roundtable on housing issues organized by Rhino public policy chief Jordan Stein.

Asked by WYPR host Tom Hall about allegations that companies like Rhino “don’t have a very positive track record in terms of transparency and accountability,” Mosby said that is something he can’t verify.

Providing the product, he said, will assist vulnerable renters “in the midst of a global pandemic.”

“It’s basically a renter’s choice bill,” he argued, using the same terminology the industry has used to wage successful campaigns for passage of similar legislation in Cincinnati and Atlanta.

Does the language in the Baltimore bill mean that landlords must offer both of the new alternatives – installment payments and the surety bond product – and the renter gets to pick one?

No, according to the city law office. It means the landlord could offer a tenant just one of the two new options – potentially just the “rental security insurance.”

“The tenant does not have the opportunity to choose an alternative not offered by the landlord”  – Chief City Solicitor Elena DiPietro.

“The tenant does not have the opportunity to choose an alternative not offered by the landlord,” DiPietro added.

As Councilman Ryan Dorsey sees it, the bill gives low-income tenants two bad choices, since most landlords will consider the installment approach undesirable and only offer the surety bond.

“At this point, if you’re still calling it ‘renter’s choice’ and talking about a person who doesn’t have the ‘lump sum’ security deposit,” he said, “then the only choice a person has is to pay a surety bond or be homeless.”

No Relationship with Rhino

Dorsey noted that the use of surety bonds in lieu of security deposits has been permitted in Maryland for years and that the bill, in effect, simply promotes their use.

A caller on Hall’s radio show questioned “whether there is something going on between the rich hedge fund backers of this company and the city council president.”

Hall rebuked the caller, calling the question “not fair” to Mosby and “very much off-base.”

For his part, Mosby responded by saying, “I had no idea what this company Rhino was or who they were. We formulated this policy well before they even reached out. . . I have no relationship with them.”