What’s another 488 days in the case of a roadway project that’s already taken more than five years to reach a stage where it’s reportedly four-fifths completed?

Nothing worth noting, apparently, judging by the actions of Baltimore’s Board of Estimates.

When the transportation department last week asked to extend the completion date of the Central Avenue Streetscape and Harbor Point Connector Bridge Project from June 14, 2021 to October 15, 2022, there were no questions from the board or any expressions of dissatisfaction or frustration.

The request was approved in a blanket voice vote by the panel, whose elected members – Mayor Brandon Scott, Council President Nick Mosby and Comptroller Bill Henry – had promised intensive scrutiny of city projects while campaigning for their current positions a year ago.

So far, the project has outlasted three mayors, will continue midway into the term of a fourth, and has gobbled up over $50 million.

Its goal is to revamp one of the major roadways to Harbor East and, more importantly, to link Michael Beatty’s mega-development at Harbor Point to the “mainland” by bridging the City Dock canal that parallels Lancaster Street.

Allan Myers, a Pennsylvania-based construction company, was hired to rebuild Central Avenue between Baltimore and Lancaster streets (eight blocks) and erect the 260-foot-long bridge across the canal.

The Rawlings-Blake administration reallocated $35 million in federal highway funds earmarked for other roadway projects and Beatty used $10 million in public tax increment (TIF) bonds awarded to his company to underwrite his share of the costs. 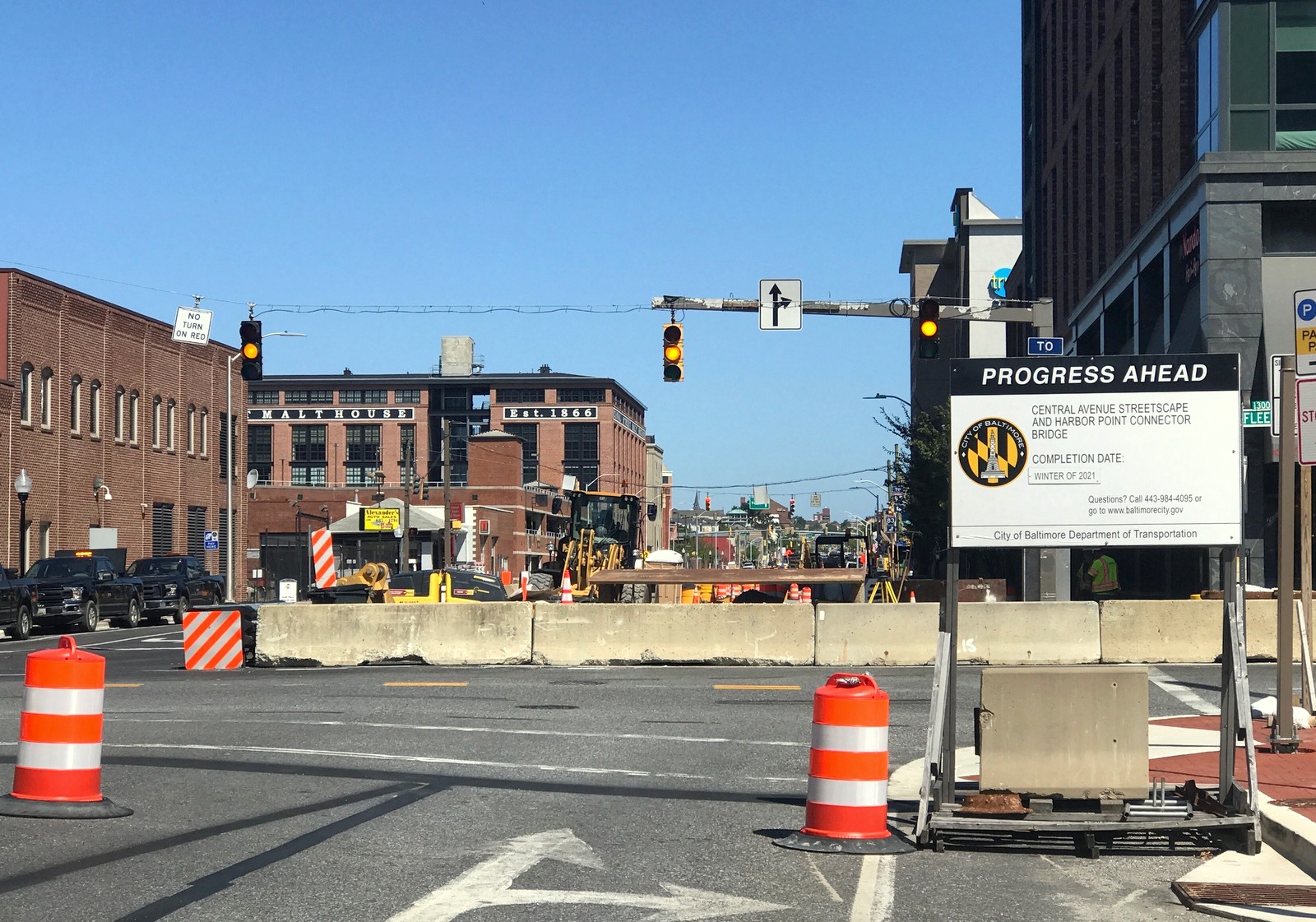 Started in June 2016 as a “fast track” design-build project, the bridge side proceeded mostly on schedule, while Central Avenue proved a mess.

Costs, meanwhile, escalated from under $47 million to over $52 million due to a half dozen extra work orders, with the prospect of more EWOs to come.

OTHER BRIDGE PROJECTS IN BALTIMORE:

When the connector bridge was opened to traffic in 2018, DOT announced that the rest of the streetscape would be finished by spring 2020.

That was not to be, and not because of Covid.

The agency blames “underground conditions found upon excavation for planned work” and “conflicts” with “existing and ongoing new development construction” along the right-of-way.

Stated more precisely, the Paterakis family has been busy extending its Harbor East real estate empire across Central Avenue, opening a Hyatt Place hotel and a 22-story apartment building along the construction site, complicating and delaying the city’s plans.

Other reasons that DOT cited in documents for the time delay spoke to the agency’s unhurried approval process, including:

“Required compliance with newly established city consent decrees, time for development, review and revision of the contractor’s as-built drawings, and time for the city to perform contract administrative and close-out services.”

As for the six blocks of Central Avenue north of Fleet Street, which is bordered by small repair shops, smaller houses and the remnants of Corned Beef Row, construction is expected to last another year. 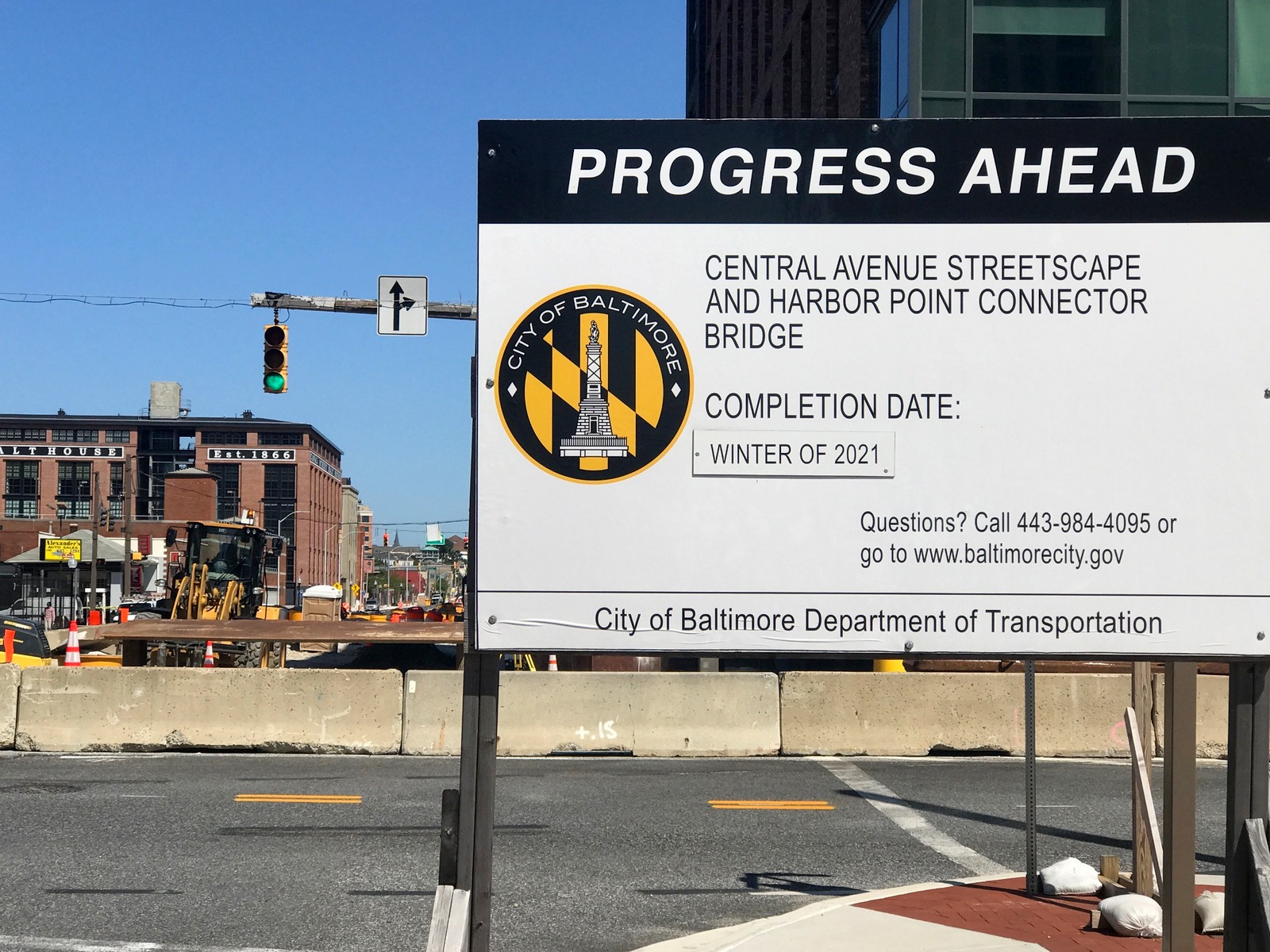 DOT’s “Progress Ahead” sign on Central Avenue has displayed numerous completion dates. The latest, “winter of 2021,” is off by roughly a year. (Mark Reutter)