Is the Maryland Department of the Environment (MDE) up to the task of protecting, let alone restoring, the health of the Chesapeake Bay and its tributaries?

Evidence grows that the agency has allowed Baltimore County (as well as Baltimore City) to slow-walk and even subvert the infrastructure improvements needed to reduce the threat of pollution from untreated sewage.

It took Blue Water Baltimore, a non-profit environmental organization, to alert MDE to massive sewage discharges into Bay tributaries from two wastewater treatment plants operated by Baltimore City. The organization’s Harbor Waterkeeper questioned whether MDE’s oversight of the plants has been too lax.

The same question applies to MDE’s oversight of the part of the sewer system operated by Baltimore County.

For example, new evidence bolsters the conclusion that the county has overstated the capacity of the system in the Jones Falls “sewershed” to safely manage sewage generated by new development, threatening one of the county’s most prized assets, Lake Roland.

It now appears likely that the county is not only violating state and county law, but also the terms of the 2005 consent decree it signed with MDE and the Environmental Protection Agency (EPA) aimed at stopping sanitary sewer overflows (SSOs).

The city is bound by a separate 2002 consent decree. MDE has primary responsibility for enforcing both decrees. It must prove that it is capable of doing so. 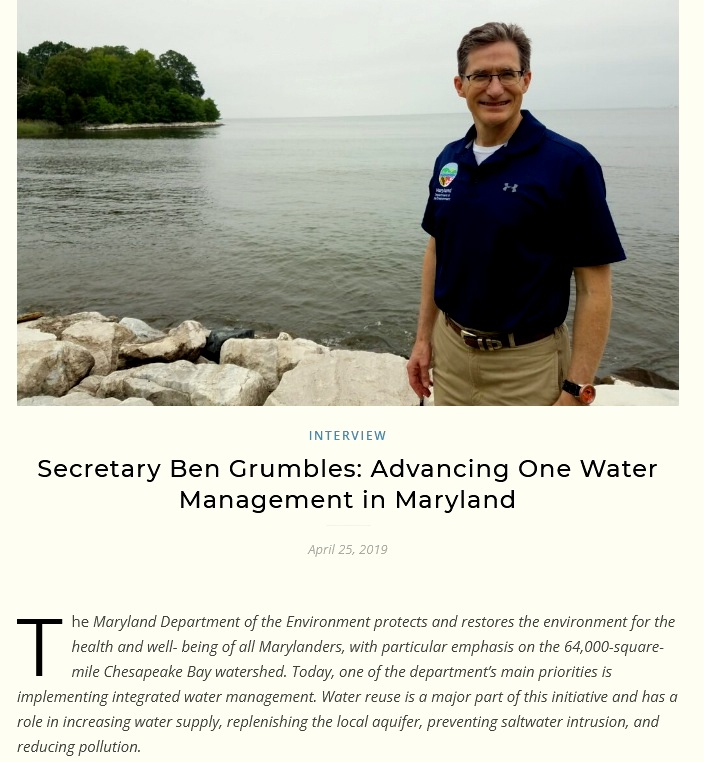 Ben H. Grumbles was appointed Maryland’s secretary of the environment in 2015 by Governor Larry Hogan. (municipalwaterleader.com)

Covering Up in the County

A series of revelations suggest that the county systematically underestimates the impact of major storm events on its system.

An effective sewage system not only accommodates the flow of sewage but also infiltration of groundwater and inflow of stormwater.

Heavy rainfall is a major cause of untreated sewage flowing into local waterways – and backing up into the basements of area homes and businesses. Aging systems like those in the county are especially vulnerable to the effects of large-scale storms.

Residents were kept in the dark because the county did not make the RK&K report public.

The first revelation came in 2018 with the disclosure of a report by RK&K. The county had hired the well-regarded engineering firm to help it prepare the Sewershed Repair, Replacement and Rehabilitation (SRRR) plan required by the consent decree.

The first step in that process was an evaluation that concluded with a report dated November 2012.

The report identified numerous deficiencies in existing public sewage facilities. It concluded that costly upgrades would be required to support planned development in the Jones Falls sewershed, in particular, the “vision” of former county executive Kevin Kamenetz to build up Towson as an urban center on par with Bethesda and Silver Spring.

Critical upgrades identified in the report were not made, while development in downtown Towson and Towson University proceeded without delay. All the while, residents were kept in the dark because the county did not make the report public.

In 2016, a group of knowledgeable and determined citizens, led by Tom McCord, was tipped off about the report’s existence.

It took them 18 months to obtain a copy of the report. The Bluestem Village case demonstrated why the county (and developers) wanted it concealed.

In 2019, a county administrative law judge disapproved the development plan for a project known as Bluestem Village near Lake Roland after opponents offered expert testimony based on the RK&K report.

The judge found that “the sewer system serving the subject property is woefully inadequate to handle existing demand, much less the additional inputs from recently approved development in the Towson area.”

The judge dismissed the developer’s reliance on the “basic services map” prepared by the county DPW, which labeled the public sewerage in the area adequate for the development.

He said the map was “plainly contradicted” by the RK&K report and suggested that the county had a motive for falsifying the map – namely, to allow the rapid development in Towson to proceed.

The judge’s decision only applied to the Bluestem Village plan, however. Since then, the county has refused to change its position on the adequacy of its facilities in the sewershed.

That’s despite County Executive Johnny Olszewski Jr.’s campaign pledge to “protect our waterways and the Chesapeake Bay” by cutting down on contamination entering local waterways. 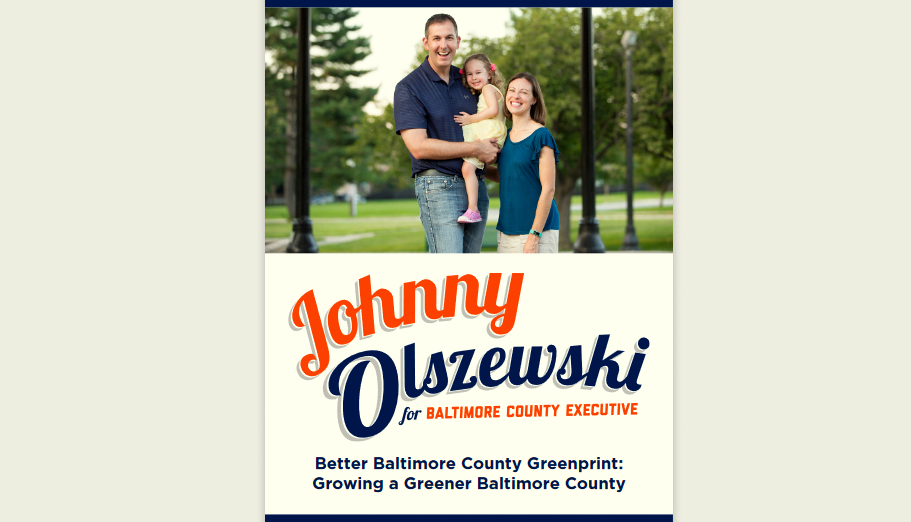 “Growing a Greener Baltimore County” was a slogan that helped Olszewski win the county executive seat in 2018.

Last year activists learned that the county, not RK&K, drafted language in the SRRR plan that appears to understate the impact of storm events on the county’s system.

RK&K evaluated the system’s performance under various storm severities, as required by the consent decree, and made recommendations for upgrades necessary to eliminate SSOs from those storms in its November 2012 report.

Not all of those recommendations were incorporated into the SRRP plan dated the following month. RK&K’s name is on the cover of the plan under the county’s name, and the company’s logo is on each page along with the county seal.

Indeed, most of the plan’s substance is drawn verbatim from the report. In July 2020, however, county representatives admitted that it was county officials who wrote the language that eliminated the costliest fixes recommended by RK&K.

The county selected an alternative model for predicting the impact of rainfall on the system that had the effect of eliminating the upgrades deemed necessary by RK&K to avoid system failure during storm events of 24-hour duration occurring once every 10 and 20 years.

DPW officials declined to elaborate on the basis for their decision when pressed by Robert Smith, a retired lawyer with extensive experience in environmental and other regulatory matters.

In August, I asked Keith Eysaman, a senior manager at RK&K, if his engineers concurred with the county’s decision to select the alternative model. His answer was, “Please direct all questions/inquiries related to this matter directly to Baltimore County.”

When I did so, acting DPW Director D’Andrea Walker responded with a letter defending the county’s decision. Her letter did not answer my question whether RK&K engineers agreed with it.

If the county acted alone when it made the decision – and possibly contrary to its consultant’s advice – was MDE aware of that when it approved the plan?

Did the agency incorrectly assume that the county’s independent consulting engineer concurred with this important decision?

And did either MDE or the EPA press the county for the data supporting it? 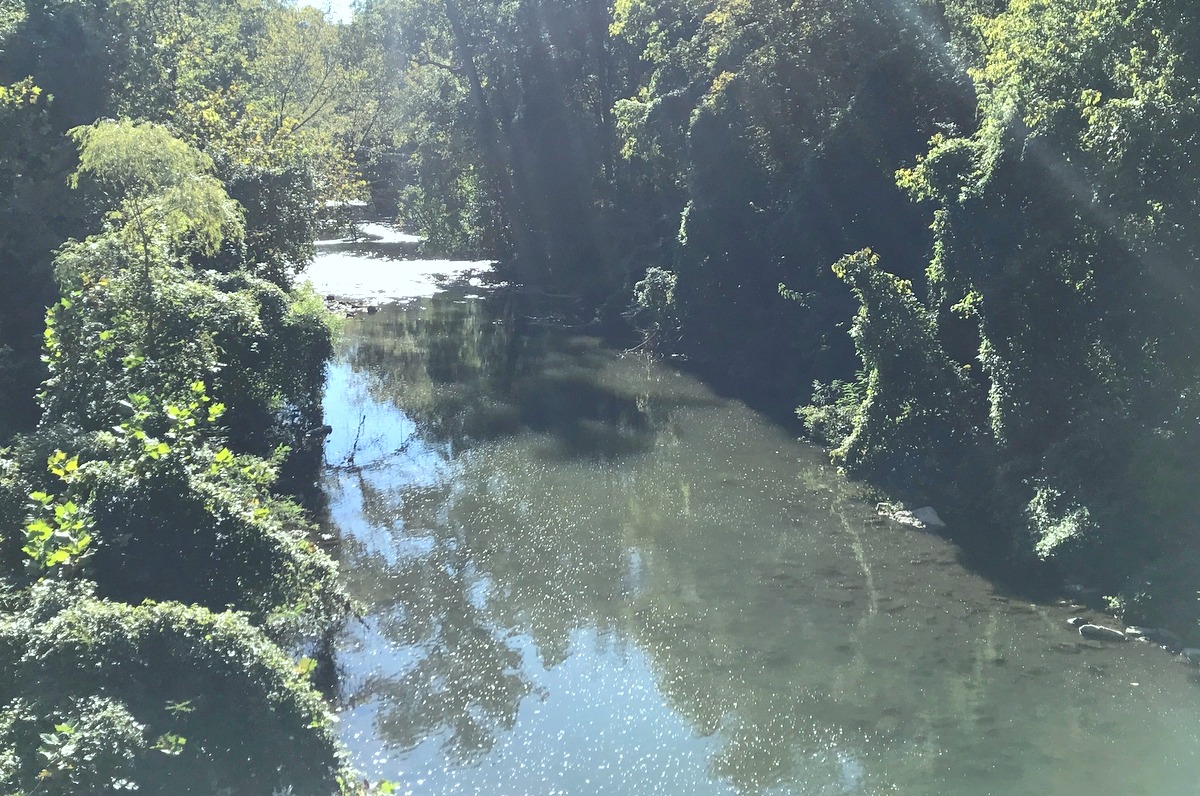 It may look nice, but the Jones Falls downstream from the Lake Roland Park dam often smells bad due to its high levels of fecal bacteria. (Mark Reutter) 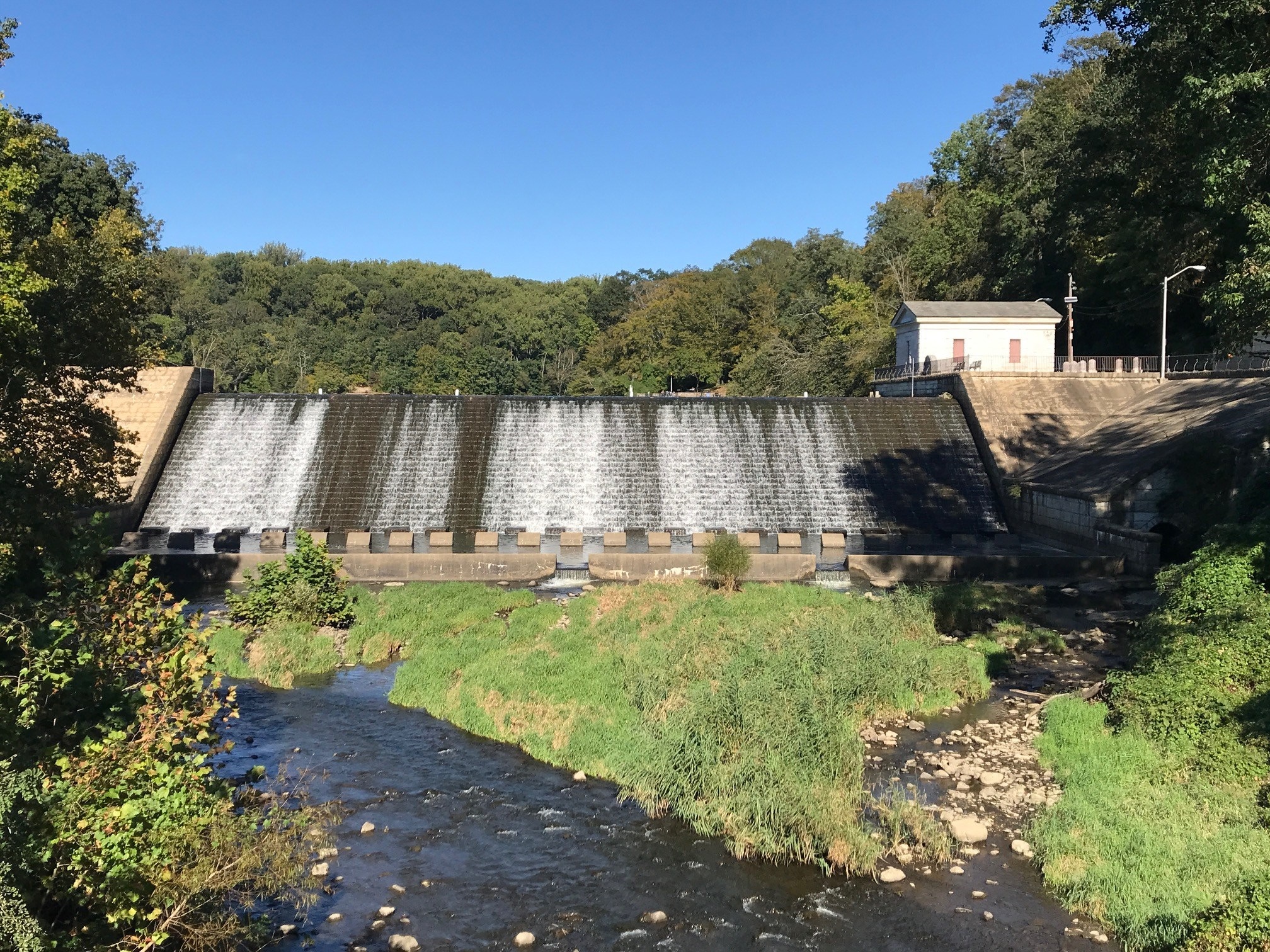 The county has a duty apart from the consent decree to review each proposed new development for compliance with its own adequate public facilities ordinance (APFO).

The APFO prohibits new development unless the public wastewater facilities can handle the sewage generated by the development “without danger of contaminating” groundwater or surface water. The standard is mandated by state law.

McCord’s group learned that DPW had used out-of-date land use and population data when projecting future sewage flows. But until last year they were unable to determine exactly how DPW calculates the capacity of sewer lines for purposes of the APFO. It took a subpoena to find out the answer.

It appears that the county does not account for the effect of storm events when it calculates the capacity of a sewer line. In fact, the column marked “inflow” (from stormwater) on the tables used by DPW is left blank.

The failure to test capacity under wet weather conditions defies specific guidance from MDE that states that facilities must be capable of handling “peak flows” that are “highly impacted by inflow/infiltration and wet weather events.” In other words, the impact of wet weather events must be included in calculations of capacity.

In addition to its responsibility to the federal court for enforcing the consent decree, MDE has a separate duty to review and approve the county’s Water Supply and Sewerage (WS&S) Master Plan every three years for compliance with state law.

Which raises the question: Did MDE knowingly accept a master plan that fails to account for the impact of major storm events on the county’s sewage system?

Persistently high levels of e. coli bacteria in Lake Roland after rainstorms are a harbinger of worse things to come as approved development in the Towson area is completed.

Last year Blue Water Baltimore reported that its testing station just below Lake Roland was one of only three (out of 13) sites in the Jones Falls sewershed not showing dry-weather bacteria improvements, meaning that Lake Roland is at ever-increasing risk.

With Olszewski no more enthusiastic than his predecessor to own up to the deficiencies in the county’s system, the prevention of sewage back-ups, overflows and discharges depends on MDE.

Enough questions have now accumulated for lawmakers in Annapolis to demand a thorough review of the agency.

Part of this review should look at whether staff cutbacks made during the administration of Governor Larry Hogan have left the agency incapable of fulfilling its regulatory responsibilities.
_____________________
• David A. Plymyer retired as Anne Arundel County Attorney in 2014 after 31 years in the county law office. He can be reached at dplymyer@comcast.net and Twitter @dplymyer.