On a quiet Saturday morning, when Anthony Francis heard the sudden rumbling and felt the shaking of his house in Harlem Park, he could imagine only one thing.

“We thought it was an earthquake,” said Francis, who came running outside to see what was happening.

He discovered that the top of a rowhouse three doors away – 1522 West Lanvale Street, a vacant, city-owned building he and his mother had been complaining about for years – had toppled over.

They had been telling housing officials about the bricks and pieces of drywall falling onto the vacant lot at 1520 West Lanvale Street, which Francis has been tending as part of a community garden.

“They told us the building was stable and safe,” said his mother, Angela Francis, recalling their interactions with the city. “We didn’t want them to knock it down, we wanted them to shore it up.”

But the family says the wall, exposed by the city’s previous demolition of a rowhouse years earlier, had never been properly stabilized.

Last Saturday it finally happened – the third floor slid right off the building, scattering debris onto the patch of grass where Francis had planted shrubs, begonias and other perennials and placed the letters “HP” (for Harlem Park) on a big chunk of concrete. 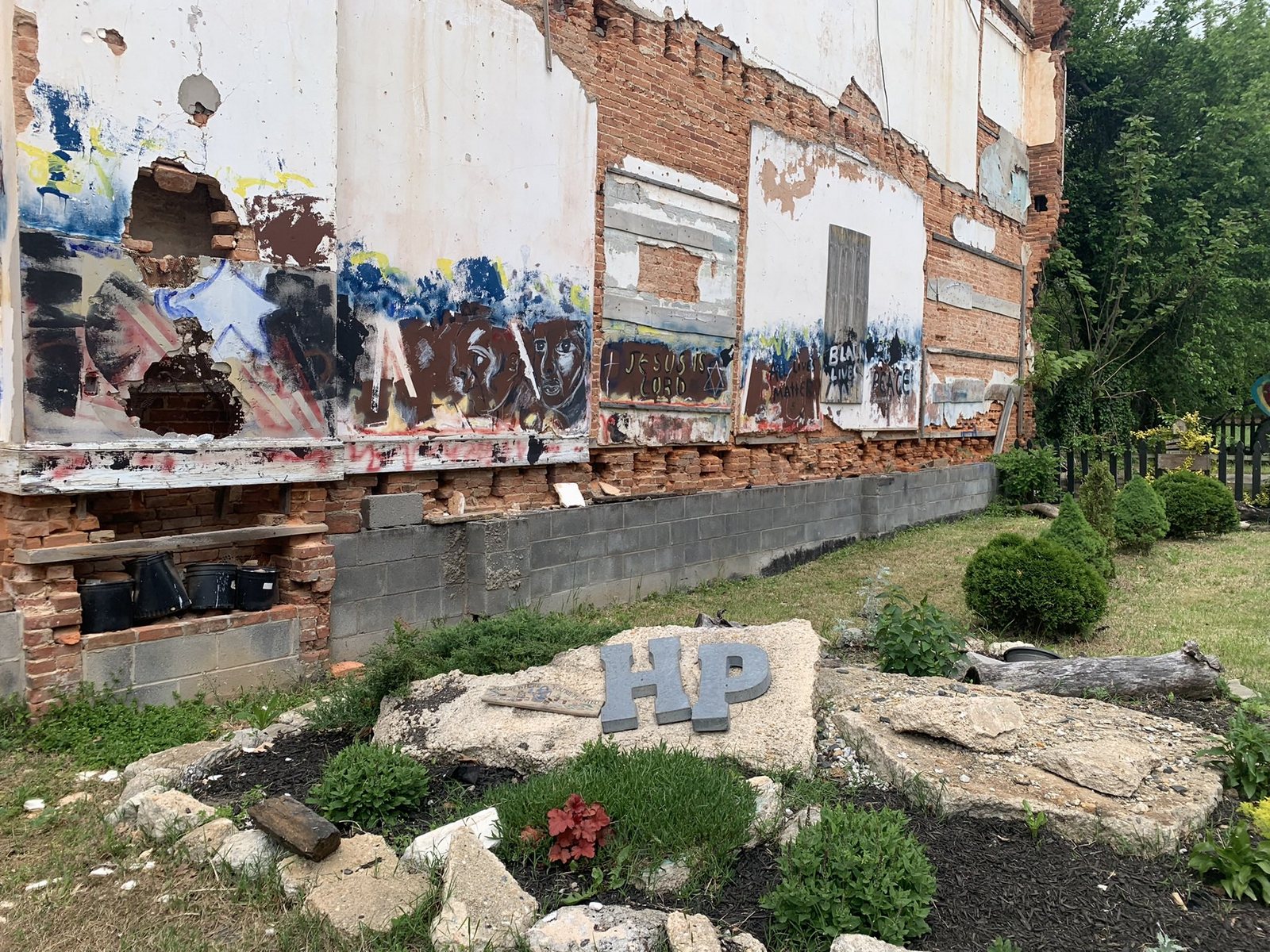 BEFORE THE COLLAPSE: Part of the garden that Harlem Park residents had made in the 1500 block of West Lanvale Street. (Fern Shen)

There it lay throughout the rest of the Memorial Holiday weekend until, on Tuesday morning, city workers knocked on his door and announced that in an hour they would be shutting off the power and conducting “an emergency demolition.”

The crew clawed down the remains of the rowhouse as well as the two adjacent vacants – 1526 and 1524 West Lanvale.

That left the Francis family’s house with a newly exposed wall. Their property had suddenly become an “end-of-group” unit.

As city crews continued their work on Tuesday, red brick dust covered the other part of the garden, across a small alley, that escaped the falling bricks.

Anthony Francis aimed his hose at the peach trees, pear trees, grape vines, strawberry plants, Russian sage and other plants he’s been tending there for the past six years.

The garden receives support from Memorial Episcopal Church as part of its Guy T. Hollyday Memorial Justice and Reparations Initiative.

Located in the historically white and affluent Bolton Hill neighborhood, the church undertook the project “to come to terms with the legacy of slavery and segregation” at the church and in its part of the city.

Majority-Black Harlem Park is “is just 10 minutes away on Lanvale, but when you get down there, there’s like a barrier between us and them,” said Francis, who was hired by the church as a “reparations organizer.”

“All day we’ve been crying red tears, from the dust, you know?” he said, as he, his brother Charles and other community members gathered beside it. 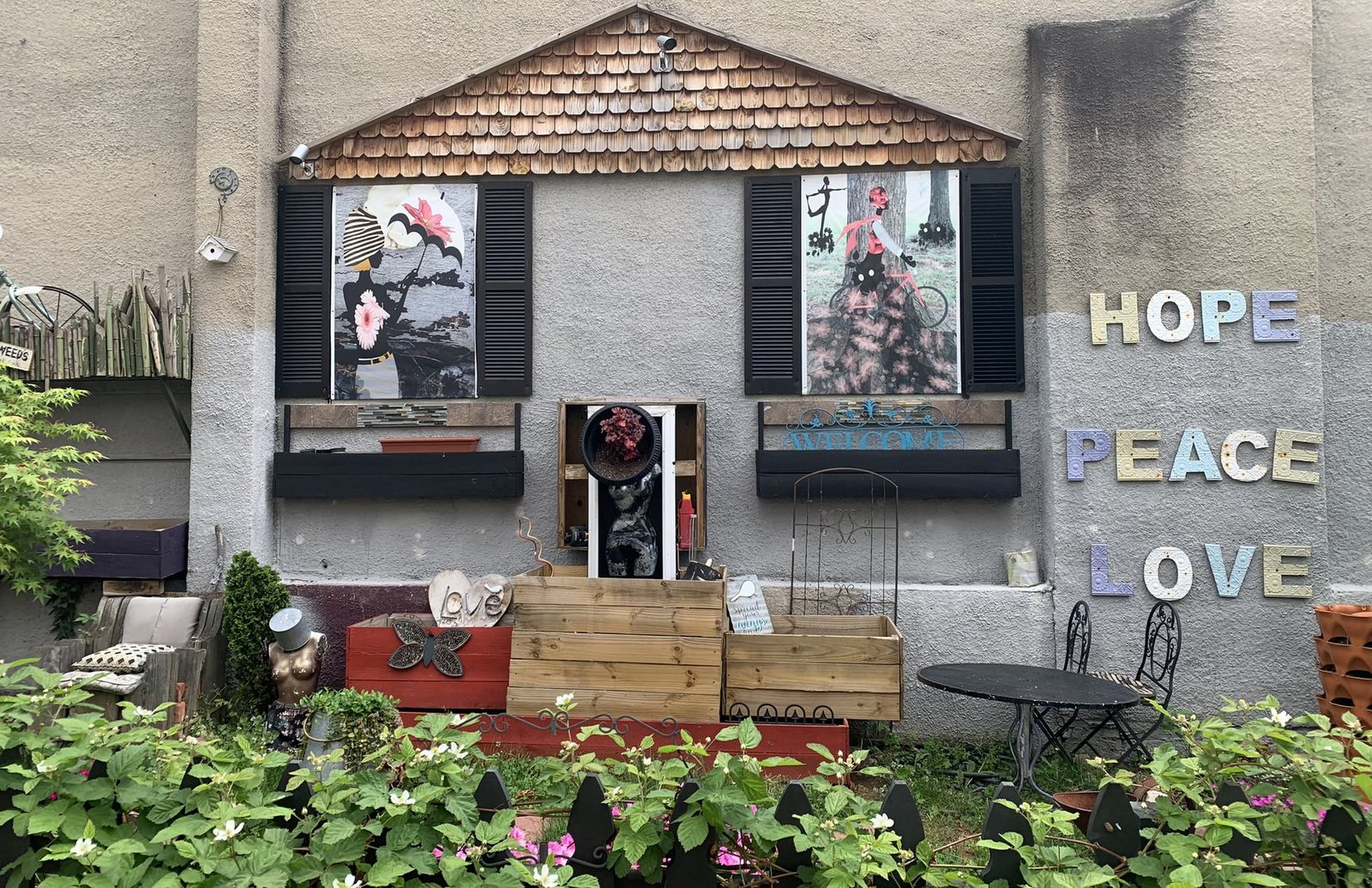 The Harlem Park community garden on West Lanvale Street that receives support from Memorial Episcopal Church in Bolton Hill. BELOW: Anthony Francis tries to wash away the dust that covered the part of the garden that remains. (Fern Shen) 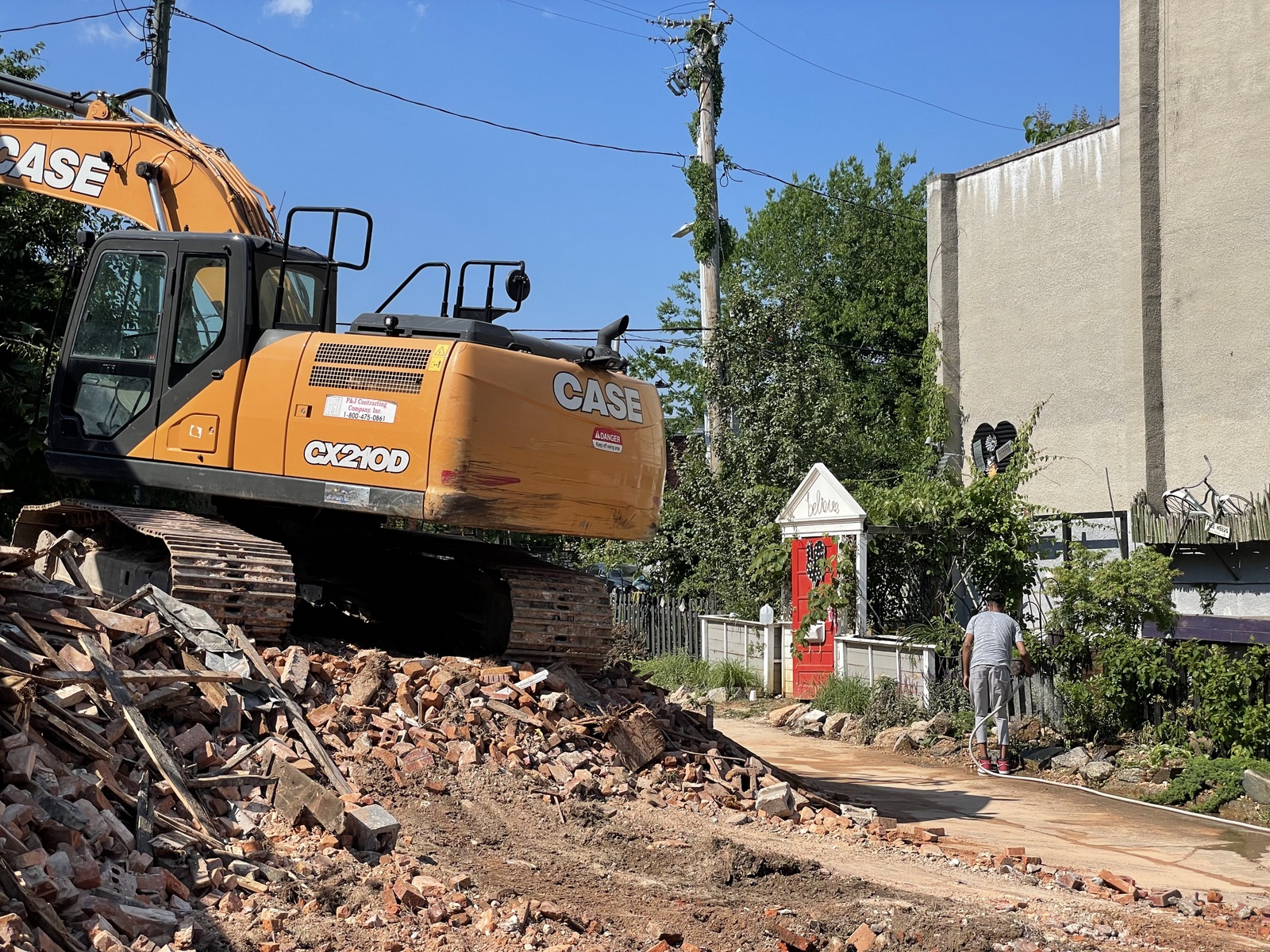 He and his brother have decorated the garden with found objects from the streets – a small metal table and chairs, a red-painted door with a mailbox and “Believe” written above it and, in metal lettering tacked to a wall, the words HOPE, PEACE and LOVE.

Francis picked up a big piece of masonry from the rubble pile, carried it across the alley and placed it in the remaining part of the garden.

Michael Coleman, who grew up in Harlem Park, said the garden is an important symbol for the residents of the neighborhood, where blocks with boarded-up vacants are punctuated by the  occasional green city trash receptacle, indicating someone still lives there.

He thought students who attend the Augusta Fells Savage high school across the street, especially, need to see bright spots like the garden.

“If you take places like this away, it makes it hard for them to believe there’s another way to live,” Coleman said.

Angela Francis is angry about the loss of the garden and the damage she believes was done to the house that she owns and where her sons live.

But most of all, she is angry about the city’s failure to preserve the building it owned for decades – and others in this West Baltimore neighborhood.

“I do not want this to be a narrative of ‘Oh, the city should have demolished these buildings years ago, bring in the bulldozers,’” said Francis. “That’s my fear. They’re going to take this story and justify destroying our community.”

She said the city should never have let the neighborhood housing stock, especially properties it owns, become so dilapidated.

“They would never let this happen in Bolton Hill or some affluent area. They put the roofs back on, they fix them up,” she told The Brew, standing beside the dusty pile of broken bricks and concrete. “What I’m saying is, this is intentional. It’s pre-gentrification.”

“I do not want this to be a narrative of ‘Oh, the city should have demolished these buildings years ago, bring in the bulldozers’” – Angela Francis.

The city, she said, should be saving the buildings and putting them in the hands of community development groups that will ensure longtime residents get to live there.

Harlem Park was a different place when his parents had a house nearby on Bruce Street, David Gilliam said.

“People resided here. People had barbecues,” Gilliam said. “I was here when it was nice.” 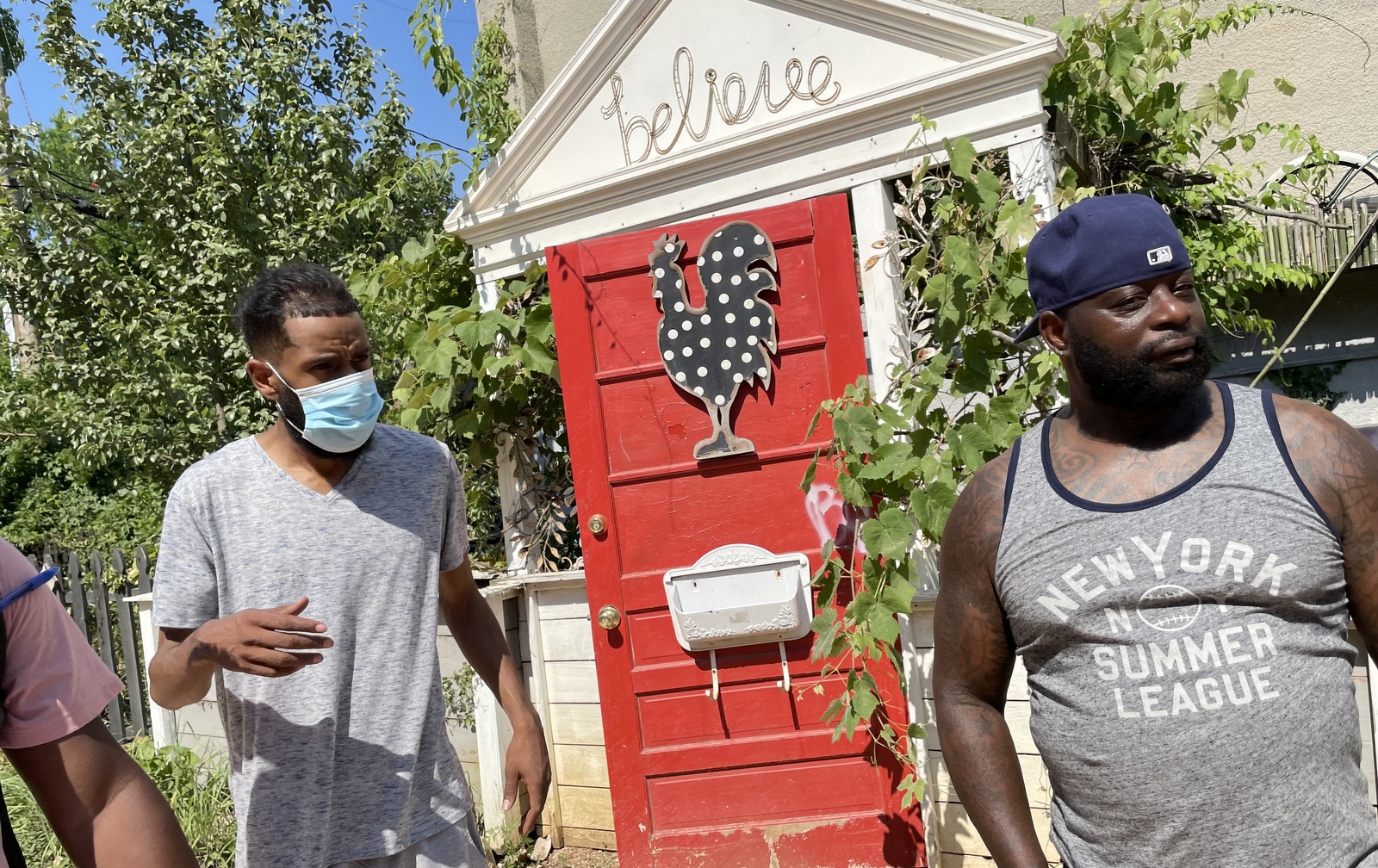 Anthony Francis and David Gilliam watch from the community garden as workers demolish the collapsed building across the alley. (Fern Shen)

Asked to comment, housing officials described what happened on Tuesday as an emergency demolition.

The rowhouse that began collapsing on Saturday “was city-owned and is a property that was deeded to the City from HABC in 2008,” according to Tammy D. Hawley, a spokeswoman for the Department of Housing and Community Development.

The property had been available through the city’s Open Bid program, she said, in an email.

The other two properties, Hawley said, had to be demolished because they had become “an imminent threat to the public.”

These houses, she wrote, “were both privately owned vacant buildings with significant preexisting roof damage.”

Hawley did not respond to questions about Francis’ accusations that the city’s actions and inaction are part of an agenda to clear out legacy residents.

Anthony Francis, gazing ruefully Tuesday at what was soon to be a three-unit empty lot beside his house, tried to come up with a silver lining.

“At least I can keep a better eye on the garden now,” he remarked, looking toward his home. “And maybe the wifi will be better.”

Data on file from the Baltimore city CODE map and other sources shows 1522 West Lanvale Street, the building that began to collapse on Saturday, was sold by the Housing Authority of Baltimore City to the Mayor and City Council in April 2008 for $7. Land records show it was acquired by HABC in 1971.

There’s a single citation on file for the property. In July 2008, it was designated by a housing inspector as unfit for human habitation. It was ordered to be brought up to code within a month.

The adjacent building, 1524 West Lanvale Street, was sold in 2001 by the city to GEF Global Enterprises, of Astoria, N.Y. The same inspector cited it as uninhabitable in August 2011 and said it was to be brought up to code within 30 days.

The next building over, 1526 West Lanvale Street, has been listed as owned by Shirley Ann and Eric Evans for decades. It was inspected and deemed uninhabitable 13 years ago, in February 2009.