Celebrating a launch said to be coming in the next few weeks, Baltimore Banner founder Stewart W. Bainum Jr. last night addressed a gathering in the nonprofit publication’s newsroom that included its growing staff.

The organization has so far hired 63 people – including 42 on the editorial side – the hotel magnate and philanthropist said, speaking to guests at a cocktail reception held at its offices at the Inner Harbor.

“I just want to thank each of the team members for taking a chance on this not-for-profit startup, which we see as a real world laboratory for exploring and finding new ways to deliver news more efficiently and more effectively,” Bainum said.

[The Brew attended as a guest. It is not affiliated with The Banner.]

As photos of the new hires scrolled by on a screen behind her, editor-in-chief Kimi Yoshino described some of the beats they have been assigned, including not only mainstays like criminal justice, education, City Hall and arts and culture, but several positions for data reporting as well.

“I think this goes to the core of what we want to do,” Yoshino said. “Delve in deep on some of these stories. Look at the numbers and also look for solutions.”

The news operation they are building from the ground up will grow even more, Yoshino said, explaining that business and sports coverage will be added at a later stage.

As the two spoke, a gathering storm outside could be seen unleashing a downpour on tourists dashing for cover four floors below.

Bainum described how the organization’s prominent location – 621 East Pratt Street in the Power Plant complex of the Cordish Companies – was selected.

“It was not only the most desirable, but thanks to the Cordish family, the most economic by a mile,” Bainum said, referring to the company’s CEO, local developer and casino operator David S. Cordish.

“So, thank you, David, and the entire Cordish organization,” he added.

Asked later about its lease deal with Cordish, Banner CEO Imtiaz Patel said the per-square-foot rates the developer offered were lower than those of other commercial property owners who responded to an RFP.

He declined to say how much lower than market rate the payments are, noting that other aspects of the lease figured into their decision to go with Cordish, including cheaper parking for the staff, utility cost adjustments and other breaks.

Patel said that Cordish threw in the office desks for free.

Supporters, donors and advertisers, as well as Cordish, will have no influence on editorial decisions, Patel said.

“We’ve been very clear from the beginning: the newsroom is completely independent,” he said. “No one can influence the stories.”

Published by the nonprofit Venetoulis Institute for Local Journalism, The Banner was named in honor of the late Ted Venetoulis, a former Baltimore county executive who was working with Bainum on the project when he died last year.

“For Ted, news was about ensuring democracy,” she said, before reading a passage from the 2017 book, “On Tyranny.”

CEO Patel also spoke at the gathering of state lawmakers, business owners, civic leaders and others sipping drinks and checking out the 15,000-square foot space with a waterfront view and rows of desks and computers.

Bainum, who sought unsuccessfully to buy the Baltimore Sun from Alden Global Capital, has pledged to contribute or raise $50 million in seed money to get the ambitious operation off the ground.

Patel commended Atlas Restaurant Group for its year-long advertising buy and thanked them “for donating all the food today as well.”

Subscriptions, contributions and donations are going to be a key revenue stream as the organization works toward sustainability, Patel said.

“We need support from people in this community and in this room,” he said, plugging the Banner’s Founding Members Program whereby contributors can receive swag, priority invitations to special events and, at the $5,000-and-up level, dinner with him and Yoshino.

Patel also gave a shout-out to “our first official contributors,” the Goldseker Foundation and the Atlas Restaurant Group.

He commended Atlas for its year-long advertising commitment, and thanked the company and its CEO, Alex Smith, “for donating all the food today as well.”

Patel, asked later about Atlas, pointed out that the company advertises in other publications and noted that, although The Banner is hiring a food writer, it will not be doing food reviews.

“They will have zero influence,” he said.

Not Failing Our Communities

Also speaking at the reception was LaFontaine E. Oliver, president of Your Public Radio and general manager of local NPR affiliate WYPR 88.1 FM.

The station and the Banner recently announced a joint operating agreement.

The station is partnering with the news website to ensure that reporting remains local and out of the hands of “multi-national companies,” Oliver told the guests.

Another featured attendee at the event was Maryland House Speaker Adrienne A. Jones.

To applause, Jones handed out a certificate of recognition to Bainum, with whom she has a shared connection: He served as a member of the House of Delegates for two terms in the 1980s. 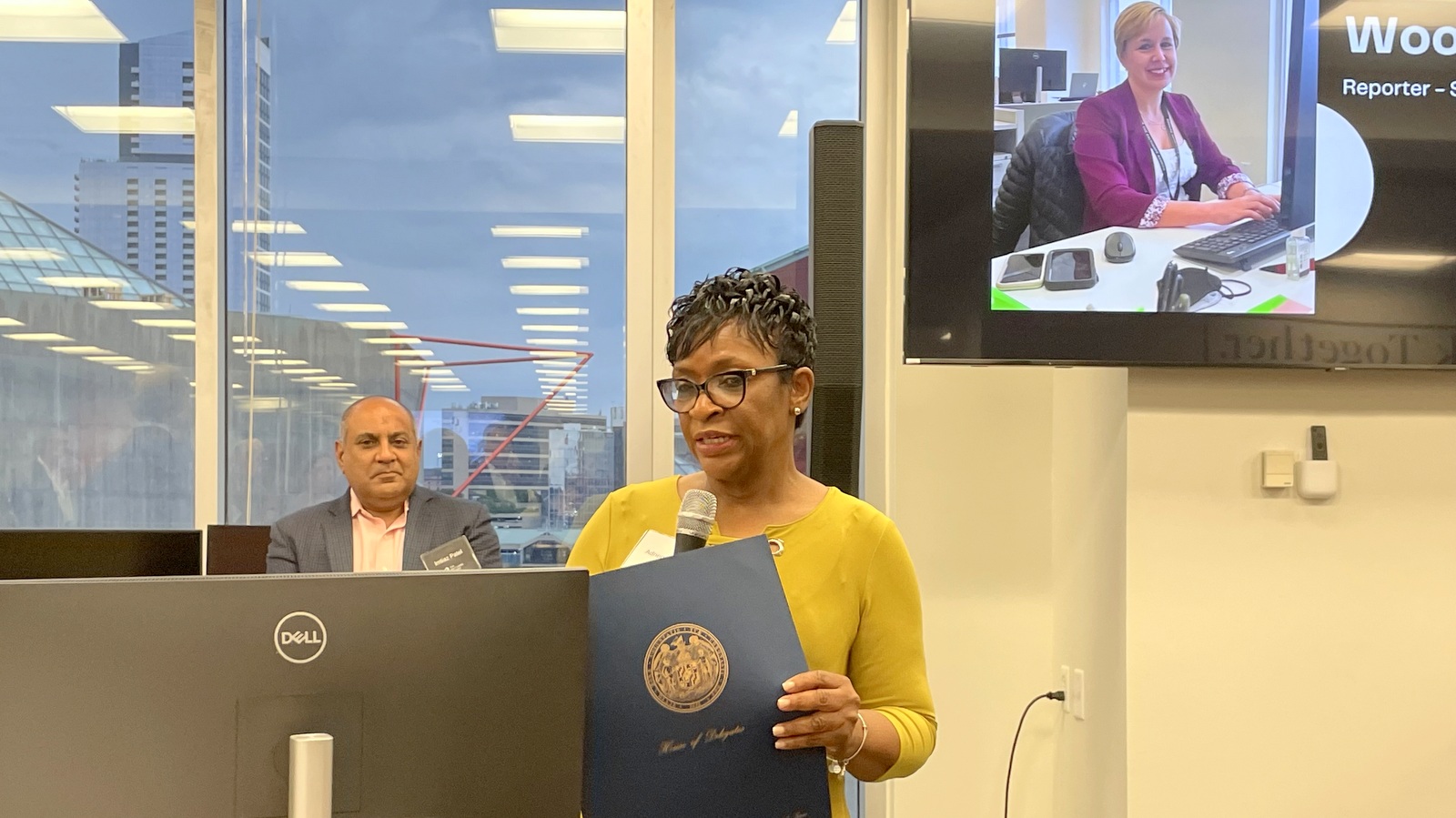