Baltimore health officials have been promoting public libraries as “cooling centers” during the current smothering heat wave, but nearly a third of the city’s 21 branch locations are anything but cool.

Those buildings have been closed due to chronically malfunctioning air conditioning.

“We’ve been having a lot of trouble with air conditioning this summer,” said Meghan McCorkell, communications director for the Enoch Pratt Free Library.

“Our team has been working around the clock to figure out workarounds, but the oldest of these buildings is 100 years old and the younger ones are 50 to 60 years old.”

“We feel it’s critical to get them online, especially with these very high temperatures and since the city has designated our libraries as cooling centers,” McCorkell pointed out. “People in the community depend on us as a safe haven and a way to escape the heat.”

Deferred maintenance on aging infrastructure and inadequate funding of capital projects have made air conditioning an exercise in frustration, she said.

At the Northwood and Govans branches, for example, private donors stepped in to pay for temporary AC units.

“They worked for one or two days, but then the electrical systems couldn’t handle it. So they are down again,” McCorkell explained. 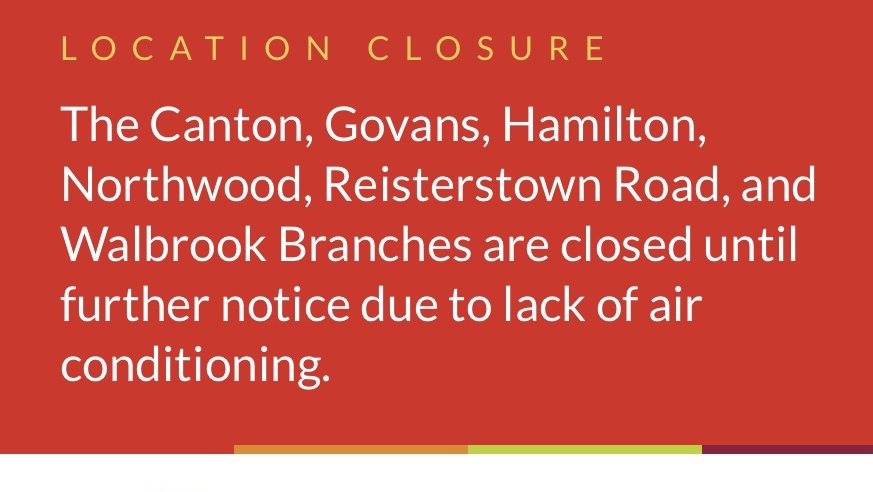 The library branches closed this summer because of absent AC. (prattlibrary.org)

The issues at play for the 62-year-old Northwood branch, at 4420 Loch Raven Boulevard, illustrate the problem, McCorkell said.

The Department of General Services says the building’s HVAC system needs to be completely replaced at an estimated cost of $1.2 million.

“That’s the sum total of all the capital improvement money we received for all of our locations last year,” McCorkell told The Brew.

Inadequate funding has forced the library to juggle emergencies, sometimes pulling money out of reserves that were intended for needs like the repair of the Hamilton branch’s roof.

“We’ve been saving for years and years to fix the Forest Park branch roof. Do we have to use money set aside Dundalk or Brooklyn?” she said. “We make a lot of hard choices.”

In the most recent budget allocation, Pratt asked for $4.5 million for library renovations and maintenance. “We got was $2.9 million,” McCorkle said.

The library also applied to the Scott administration for federal ARPA money, but didn’t receive it.

It is now looking to private donors to help out and strategies, such as setting up temporary “pop-up” library branches at locations in the community.

The Brew reached out to General Services for information on when repairs will be made and the library branch buildings re-opened. Spokeswoman Imani Edwards said she will work with the Facilities Maintenance Division to provide responses to our questions.

McCorkle said she has not yet received a report on the status of repairs, but was hopeful that the Canton and Hamilton branches – whose eledtricity was knocked out by power surges – will be up and running later this week.

After publication, we received this information from Department of General Services spokeswoman Imani Edwards:

There are six library branch buildings with no working AC, which impacts working conditions for staff and does not allow for safe conditions for the community.

These buildings have aged units and the extent of the problem varies by location. Some locations, such as Canton, may only require a part replacement. Others, such as Northwood are a significant challenge because the unit which is completely shut down is original to the 62 year old building. It is not operationally feasible to repair any more and needs capital replacement.

Repairs are general in nature considering the age of the library branches and systems.

There are currently six library branches — Hamilton, Canton, Govans, Walbrook, Brooklyn, and Reisterstown — with work orders open at DGS and the vendor(s) are currently working on repairs at these locations. One location is on hold for parts.

Each building will have different timelines due to repair requirements. Some may open by the end of the week, some may take longer if special parts are required. DGS is working closely with Libraries to provide routine updates on the status of each branch. The age of the systems and components may extend lead times due to availability and supply issues with Covid.

The Enoch Pratt Free Library did not receive all of what was requested because the capital budgeting process is set up such that agencies are allowed to request more than can likely be funded (but not everything they may need). This puts additional capital needs on the record should additional funding become available.

Although the City has increased funding for capital projects in recent years, Baltimore’s aging infrastructure and budget constraints mean that no City agency receives all of the capital funding that it needs to keep its infrastructure in a state of good repair.