An audit of Morgan State University has uncovered poor financial controls, including ballooning payments to a security guard firm without competitive bidding or approval by the Board of Public Works.

The report, released yesterday by the State Office of Legislative Audits, also criticizes the university for its handling of student refunds, financial aid, room and board charges, and deferred payments over a four-year period from January 2017 to April 2021.

“MSU did not have an adequate process to ensure that undeliverable or uncashed refunds were returned to MSU and properly credited to student accounts,” the report says in one of its seven critical findings. In a limited test, the auditor found that 30% of the refunds were posted to the wrong student account.

Collectively, the audit describes an institution with “significant deficiencies in the design or operation of internal controls that could adversely affect MSU’s ability to maintain reliable financial records, operate effectively and efficiently and/or comply with applicable laws, rules and regulations,” the report says.

Three additional shortcomings – regarding the university’s information systems and cybersecurity protocols – were redacted in the report in keeping with state law to discourage cyber attacks on public assets.

In response to the audit, MSU President David K. Wilson agreed with nearly all of the findings. The university’s Board of Regents will be holding a special meeting, with a so far unannounced agenda, this Monday.

Wilson blamed staff shortages during the Covid pandemic for a number of management failings. The bursar’s office, for example, is currently being restructured, he said, and a new director of procurement has been hired.

Regarding the lack of competitive bidding for security services and other contracts, Wilson said:

U.S. Congressman Kweisi Mfume has been chair of the governing body since 2012. Morgan’s chief financial officer, Sidney H. Evans, has been on the job since 2015.

The audit zeroes in on a security guard contract that, starting as a small “emergency” contract in November 2016, surged to $8 million in expenditures by early 2021.

Instead of being competitively bid after its initial emergency term was over, the contract was grouped as an Intergovernmental Cooperative Purchasing Agreement, even though “MSU was not eligible to participate in that ICPA agreement,” the audit reported.

The university subsequently issued a half dozen individual purchase orders, “five of which exceeded the $1 million threshold requiring Board of Public Works approval,” the audit continued.

But Board of Public Works authorization was never obtained, and “MSU did not obtain documentation, such as daily logs of hours and locations worked, to support the vendor’s billings.”

The vendor in question is not named in the report. According to Morgan State, Allied Universal provides its security services.

On August 31, a 19-year-old MSU-contracted Allied security guard was fatally shot at an off-campus apartment complex. On Monday, Baltimore police arrested a 21-year-old Morgan student in connection with the slaying.

Two sandwich bags of marijuana and a digital scale were found in the security guard’s bookbag, according to police charging documents. 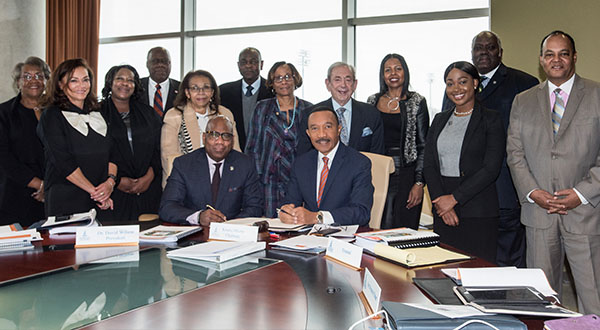 The Board of Regents reappoints David Wilson, seated at left next to Board Chair Kweisi Mfume, to a five-year term in 2018. (morgan.edu)

The security guard contract is not the only questionable agreement cited in the report.

A $250,000 contract for computer hardware and installation, a $162,756 contract for research equipment and $582,253 for sign language interpretation services were also questioned by state auditors.

For example, the university paid $58,300 for 834 hours of sign language services provided for four students in a single month. Once again, “MSU did not verify that interpreters provided the services invoiced, and instead
assumed the service was provided unless a student reported otherwise.”

834 hours of sign language services were billed for four students in a single month.

What made these billings suspect, the audit says, is that the contract called for a grand total of 690 hours of sign language services for three students over a three-year period.

As of April 2021 (or 28 months into the contract period), MSU payments to the unnamed vendor exceeded the contract price by nearly $300,000, the report says.

Another case was the emergency procurement of 100 hotel rooms to be used for student housing in 2020.

“MSU advised us that due to the Covid-19 pandemic, it needed as many hotel rooms as possible to accommodate students, and that it had contacted other hotels, but no other space was available. MSU could not provide us with required documentation, including a listing of the hotels solicited,” the report says.

Ultimately, MSU did not use the rooms because classes were held virtually for the fall 2020 semester. “But it still had to pay liquidated damages equal to 100% of the contract value ($890,000) as stipulated in the contract,” the audit said, adding:

“Although we acknowledge the uncertainty during the Covid-19 pandemic that resulted in actions MSU deemed necessary to best serve its student body, the circumstances did not alleviate the need to adequately document all actions taken to safeguard the university’s financial resources.”

While pledging to follow nearly all of the audit’s recommendations, MSU administrators balked at the call to determine whether any contract bills were excessive – and to recover any overpayments.

“Payments may have exceeded amounts contained in a particular contract, [but] MSU asserts no amounts for services have been improperly paid,” the university said in its corrective action.

Instead, all contract payments made “were for services duly rendered and within the scope of the agreement and are therefore proper.”

Given that the university offered no evidence about how it made this determination, “we are compelled to conclude that MSU’s assertion is unsubstantiated,” wrote State Legislative Auditor Gregory A. Hook.