It happened in October and then on Election Day in November and now, for the sixth time, it’s happened again – vandals slipped onto the premises of the Towson Unitarian Universalist Church and ripped down a banner with a “Black Lives Matter” message.

The first five times what was damaged were signs with just that message – positioned out by the road. Each time someone slashed them, ripped them down or sprayed white paint over the word “black,” church members doggedly replaced them.

Now what has been vandalized is a rainbow-striped banner with the “Black Lives” message and other declarations – “No human being is illegal,” “All genders are whole, holy and good,” etc. – that had been hung right on the church building near the front door.

And that has church administrator Kai Aiyetoro rattled.

“Absolutely, I’m worried – it scares me every time because it refers to Black Lives Matter and I’m the only black person here except for one other person,” Aiyetoro said yesterday. 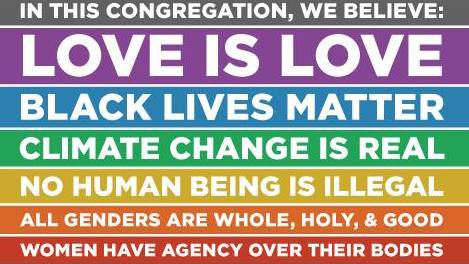 This is an image of the banner torn down at the Towson Unitarian Universalist Church. (TUUC)

The discovery that the people opposed to the church’s progressive agenda are now venturing so far onto church property and right up to the building came as something of a shock to this small congregation north of Baltimore.

“I came in Monday morning and when I noticed it, my reaction was just ‘Holy shit,’”Aiyetoro said.

Embracing the “Black Lives Matter” message was not something that TUUC, as members refer to their congregation, did casually.

“Some might chuckle or roll their eyes at a bunch of white people holding up signs and chanting ‘Stay woke!’ but for me, that’s what made it kind of magical,” Stephen Brown-Pearn wrote. 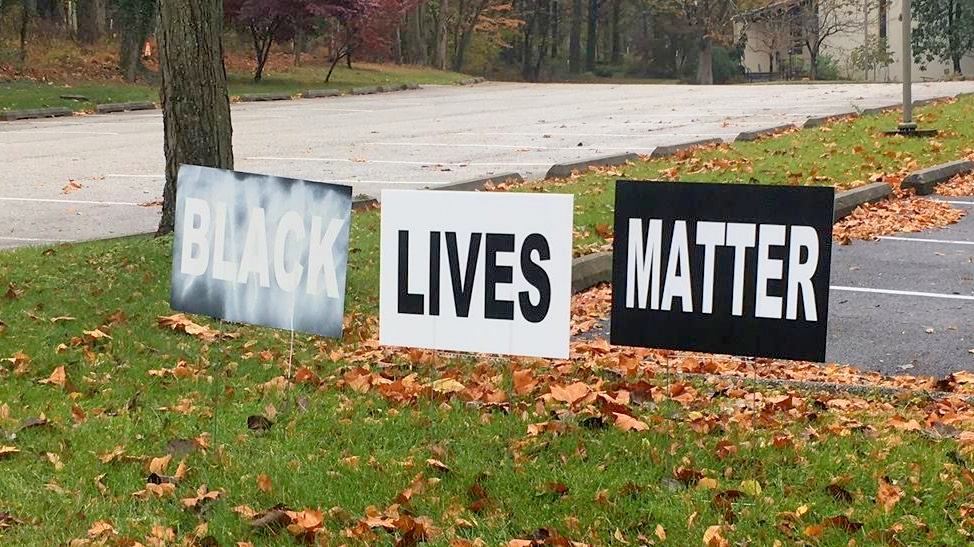 With each new incident they have also discussed as a congregation what to do besides replacing the signs and filing a police report. Camp out overnight to catch the vandals? Put up cameras? (Police did put up cameras after signs were taken down in February but, as Aiyetoro pointed out, they didn’t catch anything in the six weeks before the cameras were taken down.)

Aiyetoro said she and other church members have noticed a pattern: when they receive a lot of anti-Black Lives Matter emails, “that’s when the signs start coming down.”

But this latest incident was an escalation.

A Visit from Two Men

Aiyetoro said she is now hesitant to open the front door to strangers since, in just the space of a week, two men came, one on August 7 and another on August 14, to voice their displeasure with the “Black Lives Matter” banners.

“Two elderly white guys came, one of them right up in front of my face,” she recounted. “He really didn’t like the sign and Black Lives Matter. ”

Aiyetoro, thinking the first man might be a congregation member, let him in, but came to regret it. He was “cordial but really brash at the same time,” she recalled.

“He entered the premises asking to speak to the ‘man in charge,’ and was then informed that the minister was a woman,” Aiyetoro wrote, in an email to church staff.

“He did not like the Black Lives Matter signage hanging by the road. He wanted to know if this was a black church. I informed him that the church was 99% white. He appeared quite surprised and questioned why ‘they’ put the signs up.”

“He said ‘they’ have a right to voice their opinion and that he does too,” Aiyetoro wrote. “He said he tries not to look at the sign every time he drives past it, but cannot help seeing it and wanted ‘us’  to know how he felt about it.”

The man perused the brochures at the church explaining the “Black Lives Matter” message and appeared shocked when Aiyetoro showed him photos of the destroyed banners.

She said he blamed it on the weather and then left, commenting, “I hope you had a good weekend – at least you didn’t get shot.”

Aiyetoro said the second visitor was not as confrontational as the first and simply wanted to discuss the sign with the head of the church so he could better understand it.

Ready with Boxes of Signs

Pieces of the ripped banner remained on the wall yesterday.

“They took it down again?” said Mimi Marks, a congregant who stopped by the church and hadn’t heard the news.

Church members aren’t sure when it happened. It would have to have been sometime after Sunday services and before the staff came in Monday morning. 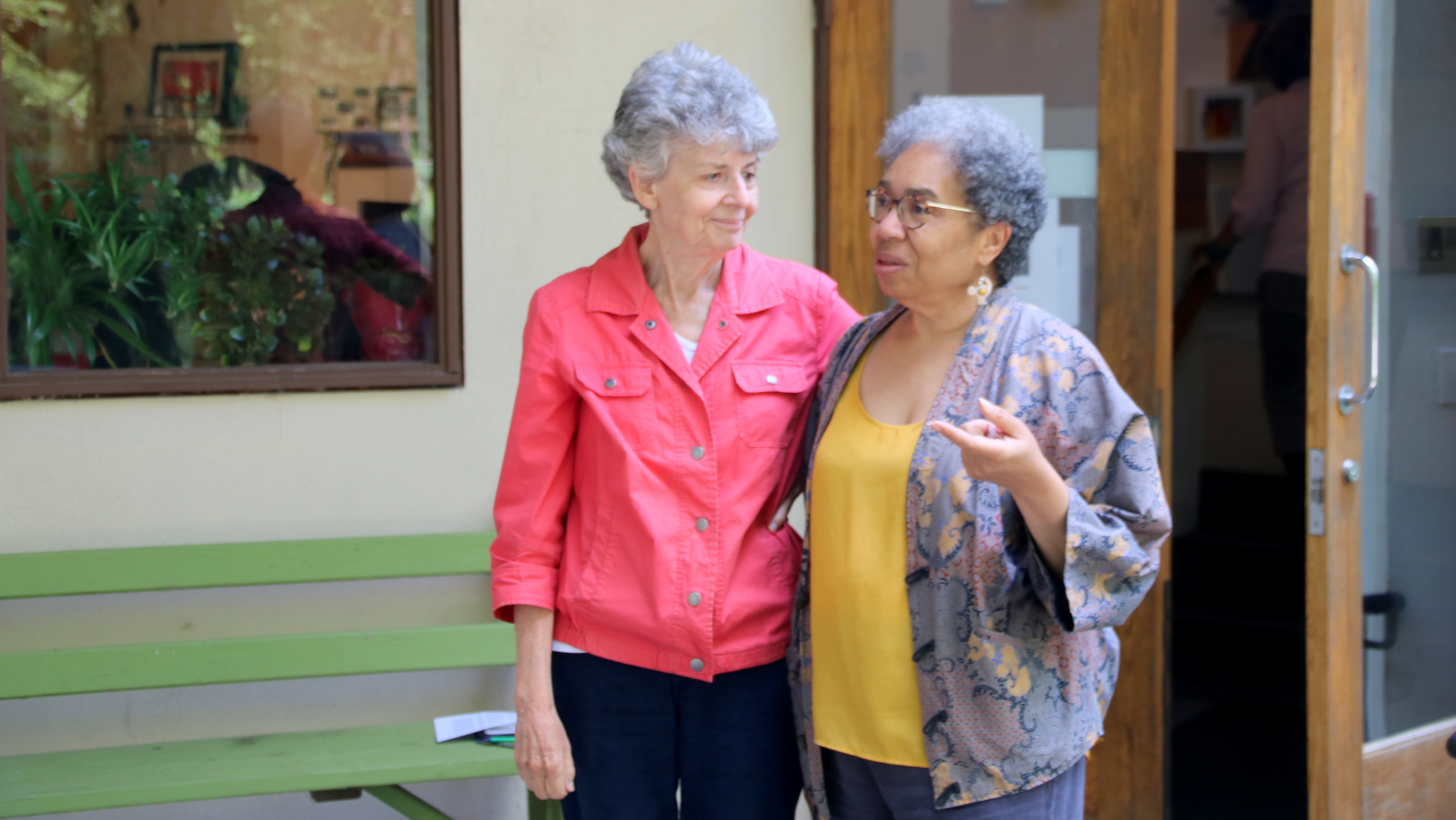 Aiyetoro, meanwhile, is doing her best to be a bit more guarded. She’s careful about visitors she doesn’t know and changed her email label from her name to “Church Administrator.”

She said the church is planning to purchase a new banner to replace the one on the doorway. (It said, “Love is Love, Black Lives Matter, Climate Change is Real, No Human Being is Illegal, All Genders are Whole, Holy and Good and Women Have Agency Over Their Bodies.”)

And if anyone damages or steals the “Black Lives Matter” signs out by the road, she said, they have boxes containing many more. 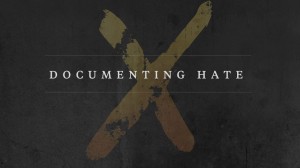 Baltimore Brew has partnered, along with other U.S. news organizations, in a project started by ProPublica called Documenting Hate which is compiling reports of hate crimes and bias incidents. To learn more about the project and TO REPORT A HATE CRIME go HERE.