No response so far from Dunkin’ Donuts management to the social media firestorm triggered by a store in Baltimore posting a sign asking customers to report employees “shouting in a language other than English.”

“If you hear any of our staff SHOUTING in a language other than ENGLISH Please call 443-415-7775 immediately with the name of the employee to receive a coupon for FREE Coffee and a pastry,” said the sign, posted on the counter at the store on 41st Street in the Greenspring Tower Square shopping plaza.

Positioned near the cash register this morning – and attributed to an unnamed “General Manager” – the sign was posted on Twitter by Gillian Morley, a producer at WBAL TV, which is located nearby.

A company spokesman has said the doughnut-and-coffee chain is looking into the matter [UPDATE: COMPANY RESPONSE BELOW]. Condemnation online, meanwhile, was swift and severe with many calling the sign racist and queuing up a #boycottdunkindonuts hashtag.

“I won’t be going to@dunkindonuts until this is addressed publicly and the racist is dealt with,” said @StephSPrice.

“And it rewards them for this bigotry with a coffee and pastry. Hell no. Unacceptable @dunkindonuts get your people!” said @aplus_tweets

“I guess@dunkindonuts is cool with racism. Hello, Starbucks!” said another commenter, referencing the incident at a Philadelphia Starbucks in which a manager called the police on two African-American men.

City Councilman Zeke Cohen said the sign is antithetical to “a welcoming city.”

“This bigotry is emboldened by our President who is comfortable ripping families apart,” Cohen said. “I represent and live in a community where you can hear languages from all over the world. It’s beautiful.”

At the Baltimore Dunkin’ Donuts, the sign was gone by 11:40 a.m. when The Brew arrived.

An assistant manager declined to answer questions about it, directing several reporters to call the company’s corporate headquarters.

“I’m not answering, I’m just saying: whatever information you need, talk to them about it,” said Abhi Sheth, an assistant manager.

He pointed to a tray of free iced coffee samples and asked the reporters if they would like one.

Tracking Down the Manager

But a man answered the phone earlier in the day when called by WBAL, which broke the story.

The man “said it was an old sign and that he is no longer the general manager at that particular store,” WBAL reported. “However, he did admit to putting up a similar sign in the past, saying customers had complained about it in the past.”

UPDATE: This statement from Dunkin’ Donuts came in after publication:

“Dunkin’ Donuts and our franchisees share the goal of creating a welcoming and hospitable environment for all guests,” said Lindsay Cronin, senior manager of public relations for Dunkin’ Brands Group, Inc.

“The franchise owner has informed us that the sign was posted by their general manager based on her own personal judgment to ensure those standards are being met,” Cronin continued. “While her intent was to address a customer satisfaction and service issue, the franchisee determined her approach was inappropriate and confirmed the the sign has been removed.” 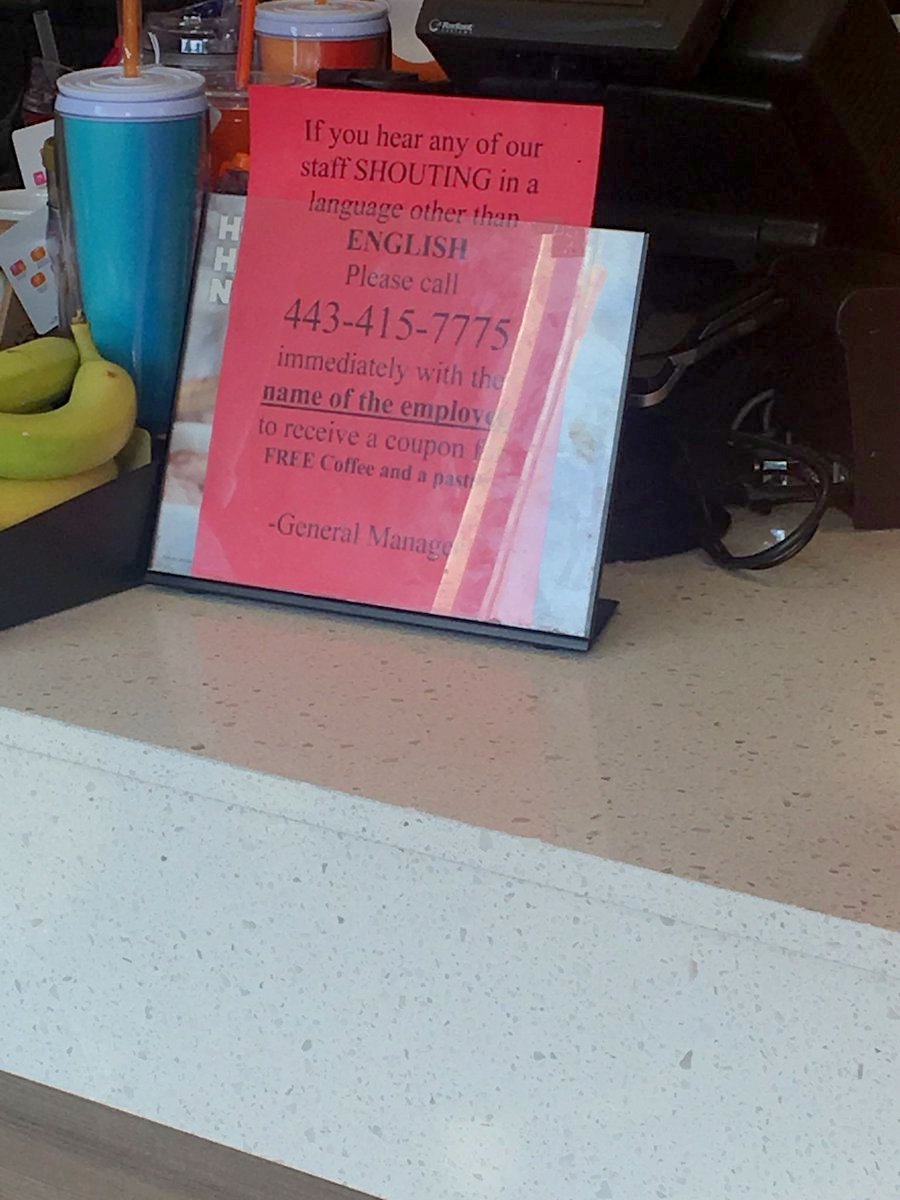 Sign posted today – and then removed – at the Dunkin’ Donuts on 41st Street in Hoes Heights. (@GillianMorley) 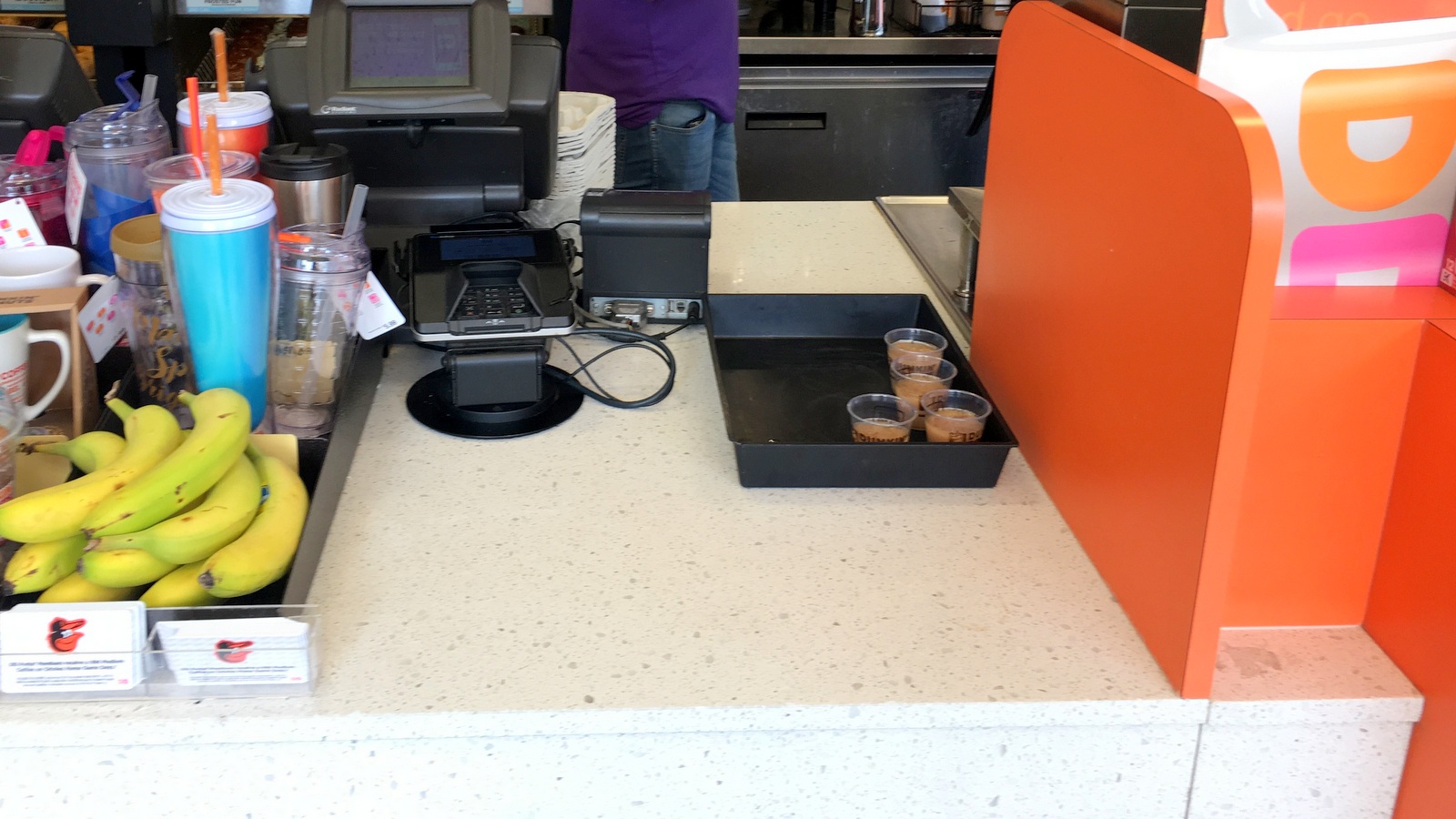 The sign was gone by late morning. (Fern Shen)