Mary J. Miller, the retired T. Rowe Price executive who ran for mayor in 2020, has chipped in $435,000 to support Ivan Bates through an obscure PAC (political action committee).

Meanwhile, Bates and Thiru Vignarajah, the other challenger to State’s Attorney Marilyn Mosby, have spent $625,000 of their own campaign money, retaining $560,000 in reserve.

Until the dust settles in next Tuesday’s primary, it won’t be clear whether over $1 million of television advertising and related expenses will make any significant impact on the outcome of the Baltimore state’s attorney’s race.

Mosby, it seems, is leaning more on messaging than money, hoping that by placing blame on “demanding judges,” “uncooperative witnesses” and “racially motivated” federal prosecutors, she can neutralize enough negatives – such as the city’s soaring homicide rate and her pending corruption trial – to stay ahead of her two opponents.

”For the last seven years, my office and my prosecutors have been the only stability in this city,” she declared last month at a City Council hearing.

“I won’t let others, that’s the media or anyone else, define my narrative.”

It’s hard to say whether, with Mary Miller’s cash and former Mayor Sheila Dixon’s popularity (the two appear side by side in those ubiquitous TV ads touting Bates), the defense attorney has broken through as a leading contender.

With no reliable independent polling on the race, each candidate currently claims to be surging ahead.

Vignarajah, meanwhile, has been hurt by allegations of inappropriate interactions with subordinates when he was a deputy attorney general, charges that were also raised in his mayoral run two years ago. 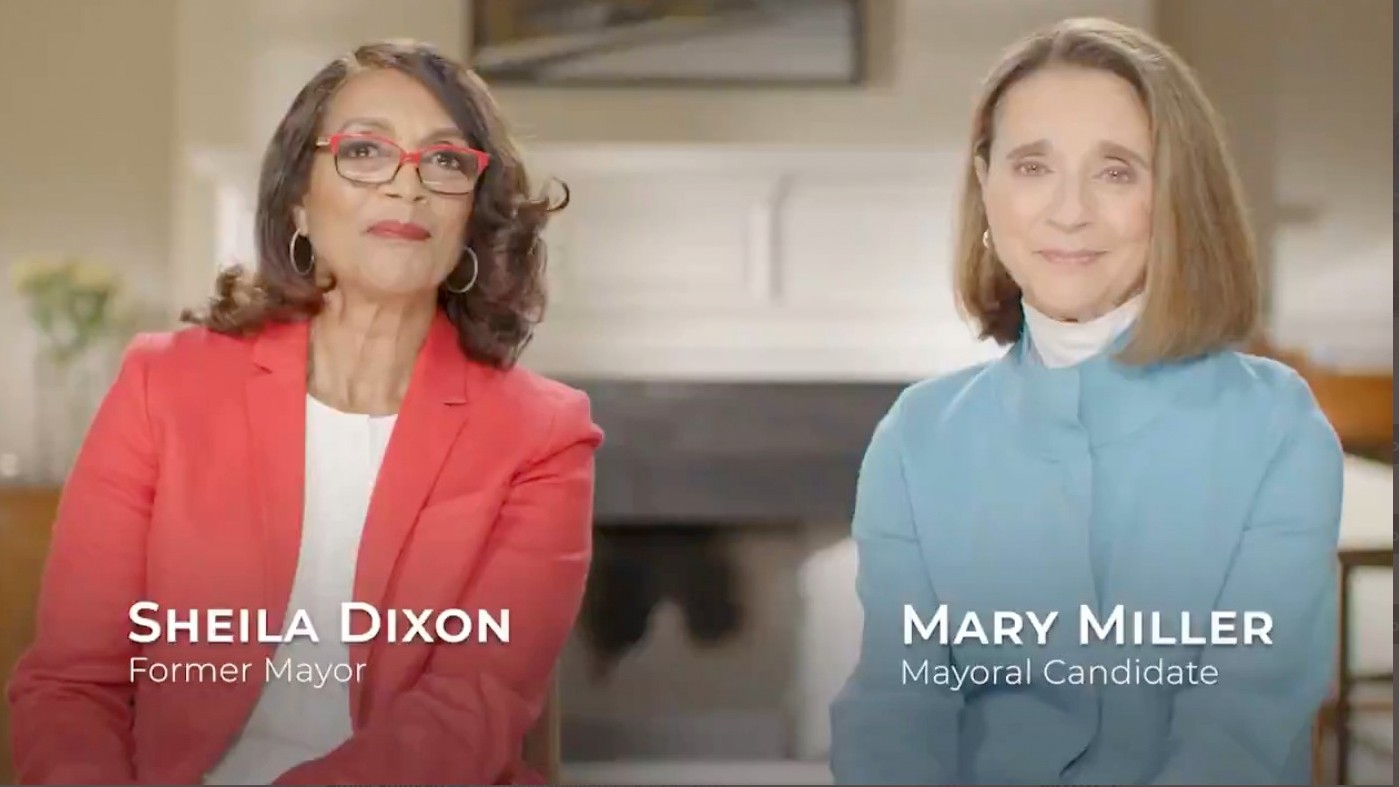 “Our love for Baltimore motivated us to run for mayor, and this brings us together to support Ivan Bates,” goes the ad bankrolled by a PAC established by Mary Miller. (Twitter)

Competing against the same two candidates in the 2018 Democratic Party primary, Mosby garnered 49% of the vote, while Bates and Vignarajah split the majority 51%.

But a Goucher College poll, conducted last month for The Baltimore Banner, showed that Mosby’s popularity is slipping. About 60% of respondents said they disapprove of her job performance.

In interviews, many cited her criminal indictment on charges of perjury and lying on a mortgage application (twice) as well as other issues surrounding Mosby and her husband, City Council President Nick Mosby.

Since the start of her second term, Mosby has been dogged by reports of her extensive out-of-town travel and a consulting business she initially failed to report on her disclosure statement to the Maryland Ethics Commission. Those news stories, in turn, generated a critical report from the Office of the Inspector General.

Other disclosures – about unpaid water bills, use of campaign funds to pay for legal costs and  a campaign contribution erroneously attributed to her deceased grandfather – followed.

In overwhelmingly “blue” Baltimore, the winner of the Democratic primary is considered a shoo-in at the general election.

The victor next week will face Roya Hanna, a former assistant state’s attorney, who is running as an independent in November.

If Bates or Vignarajah fail to break Mosby’s lock on voters, it won’t be for lack of money.

Vignarajah inundated the local airwaves with $335,000 in TV ads between early June and last week, according to his campaign report filed with the State Board of Elections.

The “Building a Safer Baltimore PAC” was set up for the sole purpose of “supporting Bates” via social media and TV ads that feature Miller and Dixon endorsing the former city prosecutor as the best candidate.

By not coordinating its activities with a candidate committee, a PAC can exercise its First Amendment right to boost a political cause or office seeker with unrestricted cash.

Miller opened the PAC in mid-June with a $250,000 contribution, of which $135,000 was immediately wired to a Virginia media company and $20,000 to McKenna Media, a political consulting company headed by a Dixon ally.

As of last Monday, Miller had given $176,000 more to the PAC, all of which (except $1,000) was handed over to Screen Strategies Media of Fairfax, Va., according to a report to the State Elections Board.

Miller has been the only contributor to the PAC, which appears, on the eve of thr primary, to have closed down.

In the latest (June 8 to midnight July 3) reporting period, the three candidates collectively picked up $154,000 in campaign cash.

Vignarajah, for example, picked up $18,000 of the $25,725 he raised last month from a filmmaker in Boulder, Colorado, and a married couple of “serial entrepreneurs” in Texas. (He also got $500 from criminologist David M. Kennedy, whose Operation Ceasefire in Boston is a model for Baltimore’s Safe Streets.)

Bates, meanwhile, had relied heavily on real estate developers such as Continental Realty, with donor addresses ranging from Stevenson and Elkridge, Maryland, to Naples, Florida, for a large part of his $61,000 haul.

The vast majority of dollars in the race come from individuals and LLCs far removed from Baltimore City.

Mosby’s supporters are the most economically diverse, ranging from scores of small contributions from city residents to a handful of “celebrity checks” from the likes of UniverSoul Circus co-founder Cedric Walker ($5,000) and Rhode Island heiress Tracy Hewat ($3,000).

In April, Bolden persuaded a federal judge to delay Mosby’s trial from May to September, or after the primary, saying she needed more time to prepare her defense.

Other Mosby donors include Darryl DeSousa, the short-lived Baltimore Police Commissioner who pleaded guilty to failing to file tax returns in 2019. He gave $100 to Mosby from an Ocoee, Florida, address.

“They fought for us! Let’s fight for them!” said the online defense fund set up for Nick and Marilyn Mosby last year. (mosbydefensefund.com)